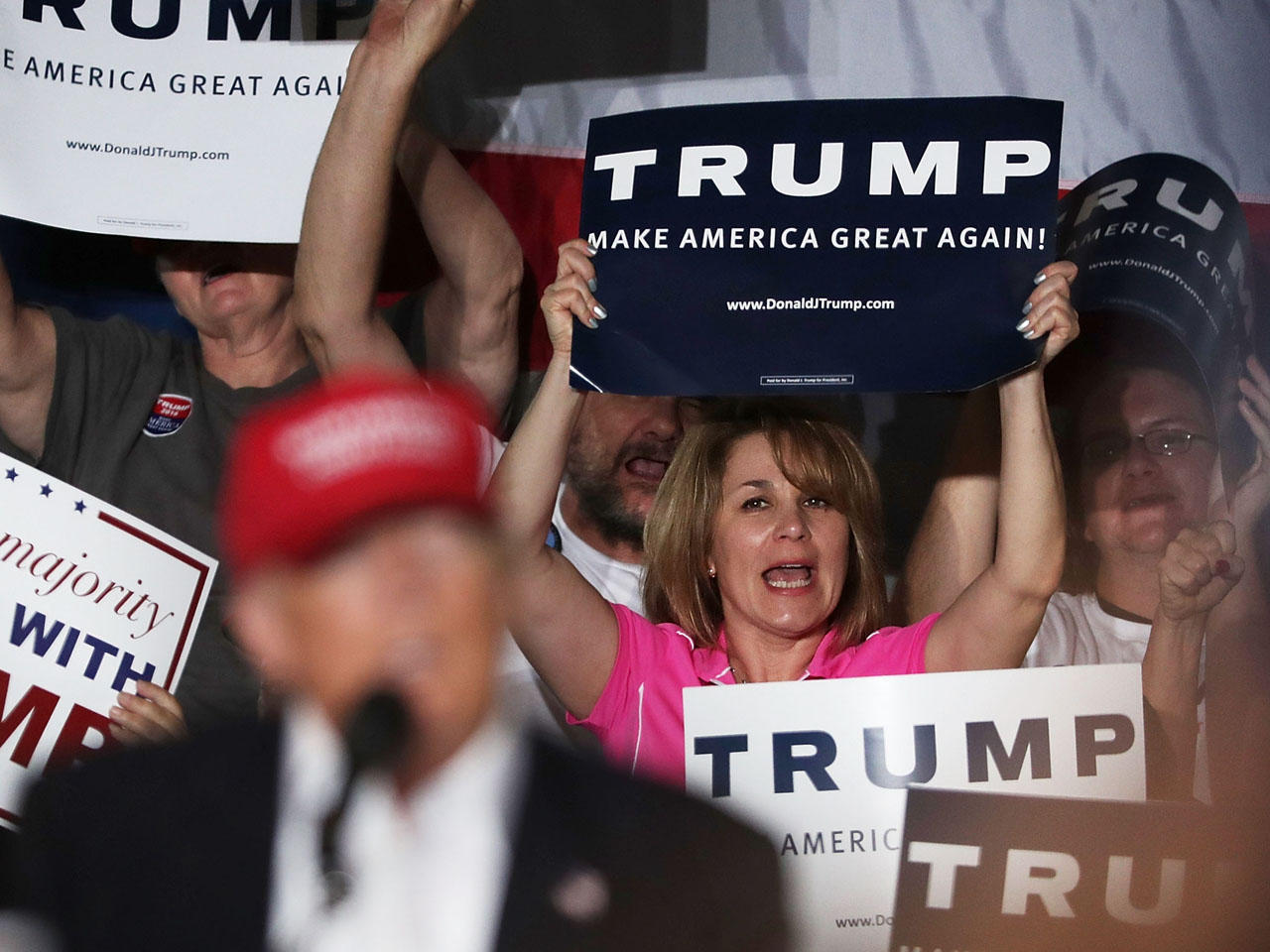 What motivates the presidential candidates’ most loyal supporters? We’ll be hearing from Hillary Clinton supporters in a few weeks. First, though: Major Garrett on Donald Trump and the voters on his side:

Donald Trump is a daily dose of exaggeration (“I could stand in the middle of Fifth Avenue and shoot somebody and I wouldn’t lose any voters, OK? It’s, like, incredible!”), but not about one thing: the size and fervor of his following.

All across America, they line up for hours … waiting for the show.

In Westfield, Indiana, Garrett met Courtney Modisette at 6:30 a.m., proudly perched in her folding chair outside the door for a 7 p.m. Trump rally. “I got about two hours sleep,” she said.

“What possessed you to come here 12-and-a-half hours early for the Trump rally?” Garrett asked.

Modisette is like many Trump voters Garrett met, in dozens of interviews. For them, until Trump came along, politics meant next to nothing.

“Unfortunately, this is sad to say, this is the first time that I voted,” Modisette said.

Trump’s voice has been raucous, caustic, insulting and divisive.

Cindy Lyons, from Jackson, Mississippi, describes her fascination: “Donald Trump has a straightforward way that he communicates.”

“Has he ever spoke so plainly that you kind of cringe?” Garrett asked.

“I understand what’s behind what he’s saying,” Lyons replied.

“He’s not a dummy like everyone seems to think,” said Richard Matckie of Londonderry, N.H.  “You don’t make a billion dollars being an idiot. So I think he’s smart enough to run the country.”

Trump is also the voice of a part of America that’s given up on the two parties and the system, one that smells corruption everywhere … a long-lost and so-called “silent majority” that is buying the political equivalent of a lottery ticket.

Parker Dykes said, “They are all part of the same deal, man. It’s, hold your nose and pull the lever.”

Trump voters have had enough of holding their nose.

“I mean, I’m mad,” said Ray Paradez, whom Garrett met at a Trump rally in Virginia -- a three-hour drive from Paradez’s home.  “I’ve been mad. I’m one of the angry voters that they’ve been discussing for the last year.”

And what is he angry about? “I’m just angry that the Republicans -- it’s like, they’re just milquetoast.”

Garrett talked to Trump before the South Carolina primary, and asked him about his fawning crowds -- and the weight of their expectations.

“Do you feel like that’s a burden, though, if you become president?” Garrett asked.

“It’s a burden,” he said. “It makes it tougher, but I don’t want to let these people down.”

Trump supporters believe, unshakably, something else: That Trump can’t be bought. “I didn’t have to do this,” the candidate said.

According to Alexandra Simoes, of Massachusetts, “[Trump] says the things that need to be said.”

About what? “The truth that nobody else says.”

Added Jorge Simoes, Trump “is different because he doesn’t have to answer to any donors, any lobbyists.”

Part of the Trump phenomenon derives from fame -- reality-TV sizzle (“You’re fired!”) ... a kind of low-brow celebrity for which former President Ronald Reagan was once derided. The comparisons crop up frequently, even though Trump supporters can’t always explain why.

“He has a little Reagan in him, too, which is always a good thing,” said Lucas Quinn of Union, Miss

“What echoes for you about Reagan in Trump?” Garrett asked.

“Just, uhm ...I don’t really know,” Quinn responded. “I wasn’t alive when Reagan was president, so I can’t speak on Reagan.”

Details aside, Quinn is convinced Trump’s got whatever Reagan had. “Everything he did made America great,” Quinn said.

That slogan -- “Make America great again” -- is part of the forlorn sense among Trump backers that America is losing something.

Ariel Robb in West Bend, Wisconsin, who has been selling Trump products for months, said, “They see a person that actually stands for what they’ve been thinking in their heads but were too afraid to say all those years.”

Like, defending the Confederate flag -- which, ironically, Trump has said belongs in a museum​. Robb sells it with “Trump 2016” right in the middle.

Tremaine Williams, another Trump fan, was selling gear at the next tent.

“There’s a perception that there’s a distance -- a great distance -- between Trump and African-Americans in our country,” Garrett said.

Williams responded, “I believe it’s being portrayed through the media in those terms.”

Trump rallies, wherever they are, draw far more whites than blacks (“Look at my African-American over here. Are you the greatest?”). It’s a trend Williams defied long before Trump began his late-campaign minority outreach (“What do you have to lose?”).

“Because I’m black, does that mean I live a certain lifestyle?” Williams said. “Do I fall under a certain category? If you’re for education, regardless if you are black or white, I’m for you. If you’re talking about building the economic system, black or white, I support you.”

There’s something else that works for Trump: visceral, almost primal hatred of Hillary Clinton.

On T-shirts, and through cat-calls (“Hillary Clinton is a bigot!”), it often gets ugly on the trail.

Betsy Wilson of Virginia came to a Trump rally in patriotic dress and full of Clinton skepticism. “I don’t believe Hillary,” she said. “I would like to see a woman president, but not her.”

Which brings us back to where we began … to Courtney Modisette and her daylong wait for Trump.

Garrett asked her, “What happens to this country if Trump isn’t elected?”

“That is a question I cannot answer,” she replied. “I -- you know, with Hillary, with Clinton, you don’t know. You can’t trust her. That’s the thing.”

Even Trump supporters don’t know the exact direction Trump will take them; they only believe it’s better than where they’ve been.