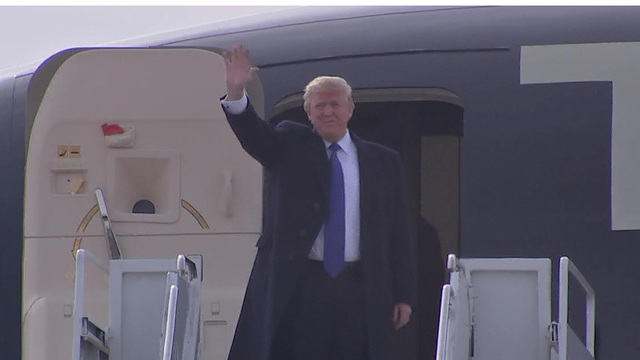 Donald Trump is well on his way to the November election, but first he needs to rake in some serious cash.

The presumptive Republican nominee's goal is to raise $1 billion by mid-October, which means he has to bring in about $45 million a week -- a tall order for someone who's won millions of votes by bashing big money in politics, reports CBS News correspondent Julianna Goldman.

"I'm self-funding my campaign. I'm not taking all of this blood money," he said in Dallas in September.

It's a line that he repeated in ads, interviews and on the campaign trail. And it worked. Fifty-eight percent of voters in a recent CBS News poll said Trump was not influenced by special interests.

But with the nomination in reach, he is now reversing course.

Not only will he be asking for money, but Trump also already has Super Pacs.

According to long-time Republican fundraiser Frank Donatelli, Trump is behind.

"I think you are starting at a billion dollars right now," Donatelli said. "You are going to need people with good contacts lists that can write checks themselves but also bring their friends and relatives to the table. Also, it takes a full court press on behalf the candidate and the campaign."

The billionaire businessman is scrambling to get that team. He hired top fundraisers who worked for Marco Rubio and Mitt Romney. He also has the backing of a reported half dozen GOP benefactors, like billionaire T. Boone Pickens and Sheldon Adelson.

But others, like the Koch brothers, are still standing on the sidelines.

"It's just bowing to reality that that's what you have to do to be competitive in November," Donatelli said.

Hillary Clinton has already raised almost $168 million from individual contributions, compared to just $12 million for Trump. But even if he's trying to open the fundraising floodgates, he still said this just last week.

Later this month, Trump will kick off a string of 50 fundraisers, beginning with an event in California.

In order to get to that billion-dollar mark, if he's not funding the general election himself (he has said he's not), he's also probably going to need to start making calls to those special interest groups he said he would never bow down to.