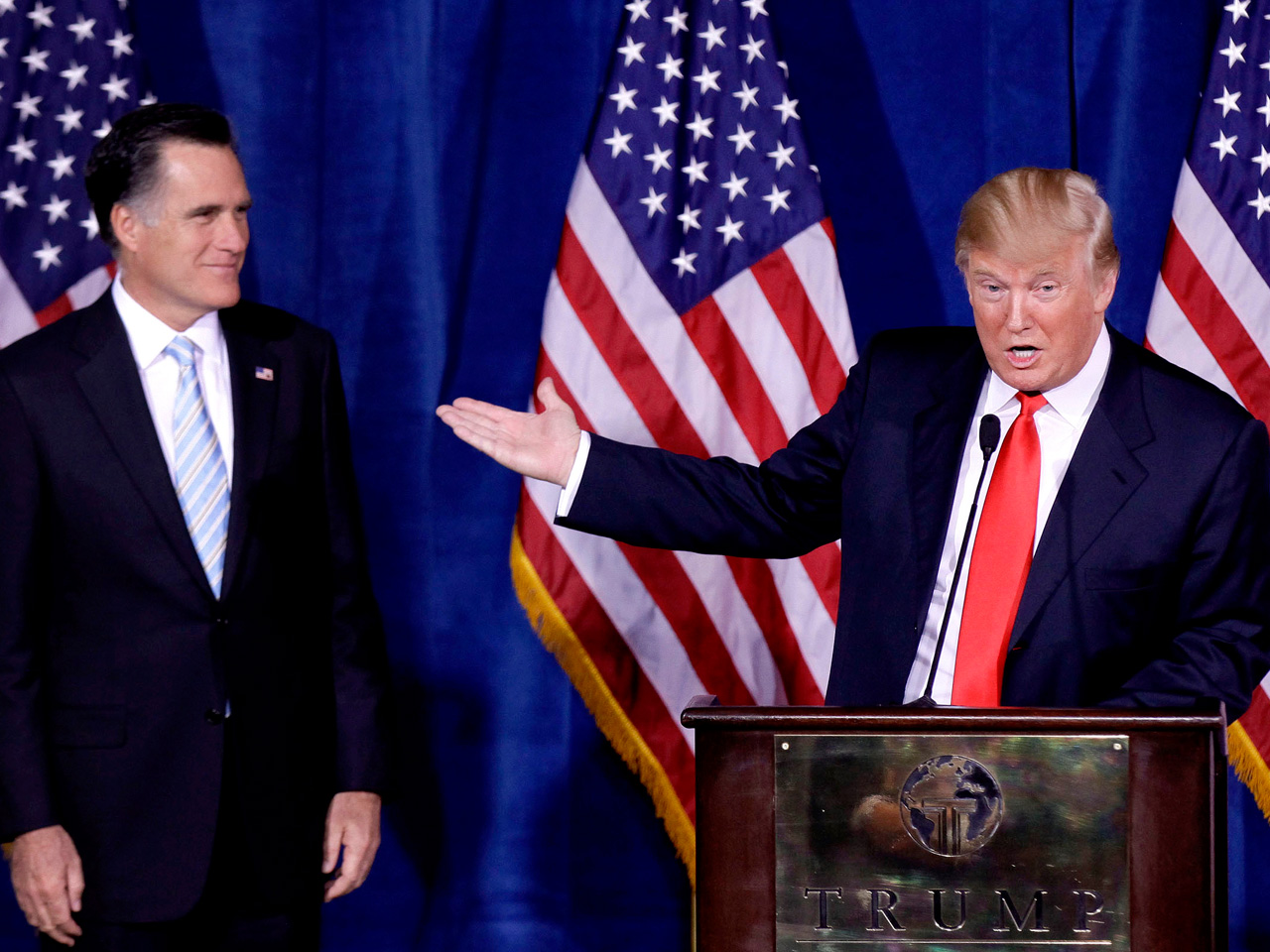 WASHINGTON Former Republican presidential nominee Mitt Romney is charging into the increasingly divisive 2016 GOP White House sweepstakes Thursday with a harsh takedown of front-runner Donald Trump, calling him a "phony" and exhorting fellow Republicans to shun him for the good of the country and party.

"His promises are as worthless as a degree from Trump University," Romney said in a speech readied for delivery to a University of Utah audience, portions of which were provided in advance to numerous news outlets, including CBS News.

In turning up the rhetoric, Romney cast his lot with a growing chorus of anxious Republican leaders - people many Trump supporters view as establishment figures - in trying to slow the New York real estate mogul's momentum.

"Here's what I know. Donald Trump is a phony, a fraud," Romney said in his talk, set for delivery later Thursday. "His promises are as worthless as a degree from Trump University. He's playing the American public for suckers: He gets a free ride to the White House and all we get is a lousy hat.

Romney adds, "His domestic policies would lead to recession. His foreign policies would make America and the world less safe. He has neither the temperament nor the judgement to be president. And his personal qualities would mean that America would cease to be a shining city on a hill," referring to Ronald Reagan's famous depiction of the U.S.

Not to be outdone, Trump put out a preemptive tweet strike at Romney Thursday:

Trump also tweeted, "I have brought millions of people into the Republican Party, while the Dems are going down. Establishment wants to kill this movement!"

"Failed Presidential Candidate Mitt Romney is having a news conference tomorrow to criticize me. Just another desperate move by the man who should have easily beaten Barrack Obama," Trump tweeted, spelling the president's name wrong.

Romney has been chipping away at Trump in recent days, but the Thursday speech was certain to be his most forceful statement yet.

Trump previously responded to Romney by saying the former Massachusetts governor was a failed candidate in his own right.

Panicked GOP leaders say they still have options for preventing the billionaire from winning the GOP nomination - just not many good ones.

Romney also declares that a Trump nomination at the party's convention in Cleveland in July would enable Democrat Hillary Clinton to win the presidency, according to excerpts of his speech.

"On Hillary Clinton's watch at the State Department, America's interests were diminished in every corner of the world. She compromised our national secrets, dissembled to the families of the slain, and jettisoned her most profound beliefs to gain presidential power," Romney says.

He also says, "A person so untrustworthy and dishonest as Hillary Clinton must not become president. But a Trump nomination enables her victory."

Romney's involvement comes as party elites pore over complicated delegate math, outlining hazy scenarios for a contested convention and even flirting with the long-shot prospect of a third party option.

The 2012 Republican nominee's speech marks his most aggressive step into the 2016 contest to date, but it was unclear what impact his words would have with voters deeply frustrated by their party's leaders.

Trump, meanwhile, was setting his sights on the general election. His campaign reached out to House Speaker Paul Ryan's office to arrange a conversation between the two, and urged Republican leaders to view his candidacy as a chance to expand the party.

"Why can't the leaders of the Republican Party see that I am bringing in new voters by the millions - we are creating a larger, stronger party!" Trump asserted on Twitter.

Indeed, there was a surge in turnout in Super Tuesday's GOP primaries. While that could typically be a welcome sign for a party that has struggled to attract new voters in recent presidential elections, GOP leaders were privately grappling with the reality that some of those voters were in fact registering their opposition to the Republican establishment.

Despite Trump's strong night, he was not yet on track to claim the nomination before the party's national gathering in July, according to an Associated Press delegate count. He has won 46 percent of the delegates awarded so far, and he would have to increase that to 51 percent in the remaining primaries.

In his speech Thursday, Romney calls this moment a "time for choosing" that will "have profound consequences for the Republican Party and more importantly, for the country."

"Of the remaining candidates," he says, "the only serious policy proposals that deal with the broad range of national challenges we confront have come from Ted Cruz, Marco Rubio, and John Kasich."

GOP strategists cast March 15 as the last opportunity to stop Trump through the normal path of winning states and collecting delegates. A win for Rubio in his home state of Florida would raise questions about Trump's strength, as could a win for Kasich, Ohio's governor, on his home turf.

The candidates have a high-profile opportunity to make their case to voters in Thursday night's prime-time debate. Retired neurosurgeon Ben Carson all but ended his bid Wednesday, saying he would skip the debate and declaring he did "not see a political path forward."

The GOP mayhem contrasted sharply with a clearer picture on the Democratic side, where Hillary Clinton was drawing broad support from voters and her party's leaders. Her rival, Vermont Sen. Bernie Sanders, vowed to keep up the fight, though his path to the nomination has become exceedingly narrow.

Romney has moved aggressively to take on Trump in recent days, saying the billionaire's unreleased tax returns might contain "bombshells." He was not expected to endorse a candidate or announce a late entry into the race himself.

The Associated Press has asked Republican governors and senators if they would support Trump if he becomes the party's nominee. Of the 59 respondents, slightly fewer than half could not commit to backing him in November. A handful of officials, including Massachusetts Gov. Charlie Baker and Nebraska Sen. Ben Sasse, have said they would not support Trump in November, though it was unclear what alternatives they would have.

One long-shot idea rumbling through power corridors in Washington was the prospect of a late third-party candidate to represent more mainstream conservatives. Former Texas Gov. Rick Perry has been approached by "a mixture of people" about being part of a third-party bid, according to Jeff Miller, who managed Perry's failed GOP presidential campaign. But Miller said Perry found the idea "ludicrous."

A more likely, though still extraordinarily unusual, scenario being discussed is a contested convention. Perhaps unsurprisingly, that idea has the most support among those working for opponents' campaigns. Others in the party express concern about the image of the GOP establishment using arcane rules to thwart the will of voters.