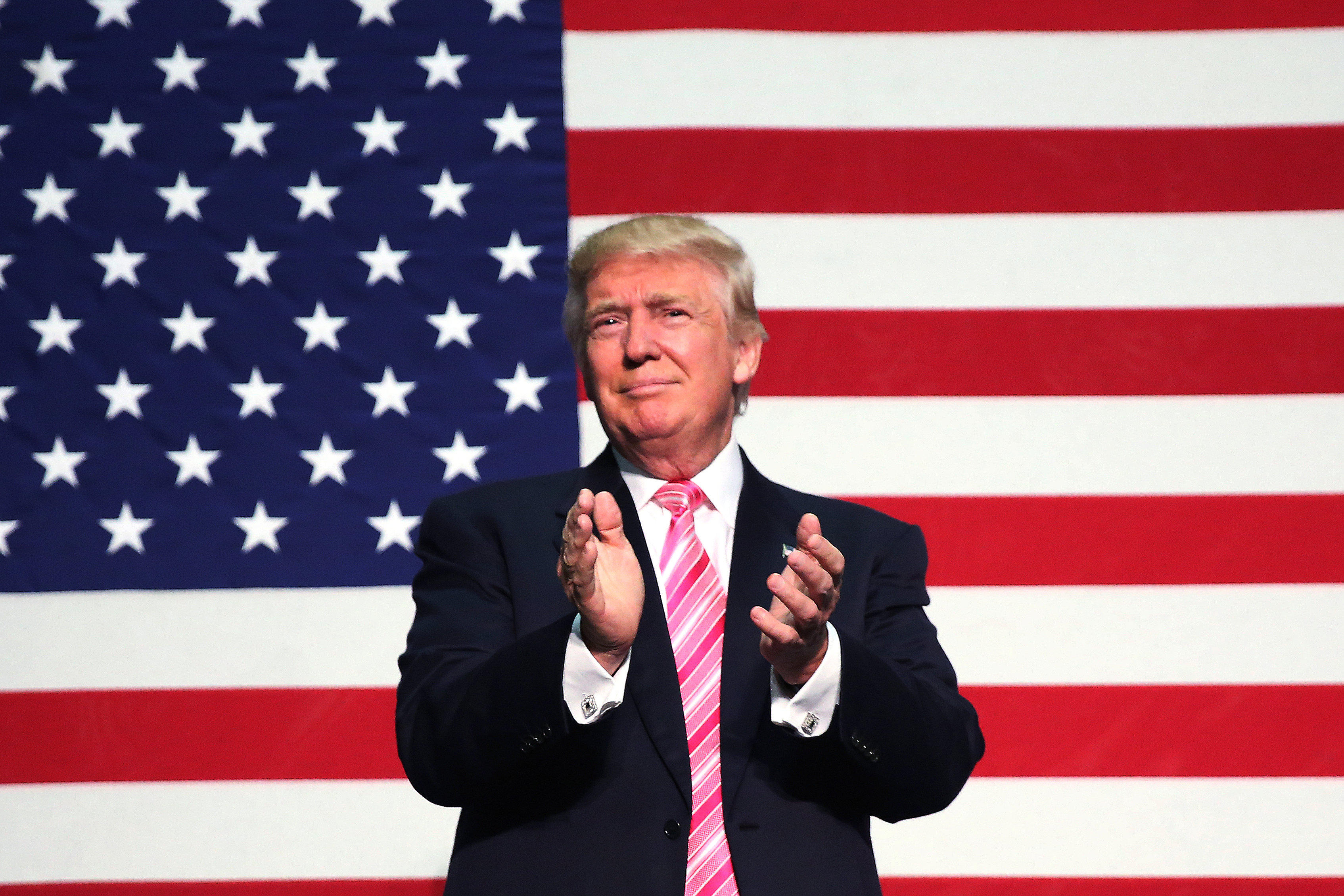 Donald Trump’s paid campaign staffers have declared on their personal social media accounts that Muslims are unfit to be U.S. citizens, ridiculed Mexican accents, called for Secretary of State John Kerry to be hanged and stated their readiness for a possible civil war, according to a review by The Associated Press of their postings.

The AP examined the social media feeds of more than 50 current and former campaign employees who helped propel Trump through the primary elections. The campaign has employed a mix of veteran political operatives and outsiders. Most come across as dedicated, enthusiastic partisans, but at least seven expressed views that were overtly racially charged, supportive of violent actions or broadly hostile to Muslims.

A graphic designer for Trump’s advance team approvingly posted video of a black man eating fried chicken and criticizing fellow blacks for ignorance, irresponsibility and having too many children. A Trump field organizer in Virginia declared that Muslims were seeking to impose Sharia law in America and that “those who understand Islam for what it is are gearing up for the fight.”

The AP’s findings come at a time when Trump is showing new interest in appealing to minority voters, insisting he will be fair in dealing with the 11 million people in the U.S. illegally and explicitly pitching himself to African-Americans, saying “what do you have to lose?”

Since Trump declared his candidacy last summer, he has paid about 120 people on his campaign, according to Federal Election Commission filings. Over the weekend, the campaign reported about 70 people drawing salaries, a number that did not include a few dozen more working as consultants. A slew of hires in early August were not yet reflected in Trump’s filings.

The AP was able to review the accounts of only a minority of Trump staffers: Others set their accounts to private, some could not be found or identified with confidence as Trump campaign employees.

The AP also reviewed the public social media accounts of more than three dozen employees of Hillary Clinton’s far larger campaign staff and found nothing as inflammatory. One staffer said Trump’s style of speaking reminded him of a roommate who had taken too many hallucinogenic mushrooms. AP also reviewed images attached to more than 19,000 stolen internal emails from the Democratic National Committee​ for racially or religiously inflammatory memes, finding nothing of note.

The Clinton campaign declined to comment on its procedures for vetting staff. It employs more than 650 people, according to its FEC filings.

One month ago, the AP sent written questions to the Trump campaign with examples of the posts. The campaign has not commented, despite several requests since.

“In vetting a prospective staffer, I’m not sure where the line would be for not hiring someone or simply asking them to take something down from social media, but there is a line,” said Beth Myers, a former top Mitt Romney campaign aide.

During Myers’ work for Mitt Romney in the 2008 and 2012 presidential campaigns, she said, social media was newer, so indiscreet or embarrassing photos were more often concerns than inflammatory views. Even outside social media, she stressed to the campaigns’ staffers that what they said and did would reflect on the candidate who employed them. “Don’t put anything in an email that you wouldn’t want on the front page of The New York Times,” she recalled telling staff. “The same thing I told my kids, I told my staffers.”

The AP found little questionable content in the ranks of Trump’s top officials. The campaign’s social media director, Dan Scavino, tweets prolifically but avoids discussing race and religion. Field organizers representing Trump’s campaign around the country, however, have had no such reservations, either before or during their employment with the campaign. Their judgment matters beyond the campaign because the paid staff of winning presidential candidates often receives jobs in the next administration.

Before being tapped as statewide director of coalitions, Craig Bachler of Bradenton, Florida, posted jokes in 2015 about Mexican​ accents superimposed over pictures of an overweight man wearing a sombrero. Bachler was named by the campaign as official staff in November, though there is no record he has been paid for his work. Bachler did not respond to a request for comment via Facebook or a message left at his office voicemail. After AP’s inquiries, Bachler blocked access to an AP reporter, and his Facebook account - which included a photo of Bachler with Trump - was scrubbed to remove the offensive post.

“Why are you mad about slavery?” the man asks. “Y’all weren’t no damn slaves.”

“Had me crack’n up!! Thank you!” Unrue wrote of the video. “Please share this with people.”

In a short phone conversation, Unrue said she tried to keep her personal social media comments positive and referred questions to the campaign.

Some posts fixated on stories of black-on-white violence with claims that news about such crimes was being suppressed.

“How about this little white boy being murdered by a black man,” grassroots organizer Annie Marie Delgado of Palm Beach Gardens, Florida, wrote in December 2014 post, one of a number highlighting crimes against white people before Trump declared his candidacy. Delgado also shared a discredited, hoax photo of the State Department’s Kerry with Jane Fonda, and commented: “I say hang them!” She was paid $11,146 through April, according to campaign records.

Fear or dislike of Muslims was a recurring theme. Though Trump at one point proposed temporarily barring foreign Muslims from entering the country and scrutinizing the activities of mosques, he has sometimes distinguished Islamic extremists who pose a risk and those who don’t. “I love the Muslims,” Trump said in September, expressing willingness to appoint one to his Cabinet.

On Facebook, Mark Kevin Lloyd of Lynchburg, Virginia, who has been paid $36,000 as Trump’s field director in the state, shared a post June 30 calling Islam “a barbaric cult.” He shared a meme June 16, four days after the Orlando nightclub shooting by a heavily armed Muslim who professed allegiance to the Islamic State group. The meme said people should be forced to eat bacon before they can purchase firearms.

Lloyd declined to talk to the AP without the Trump campaign’s permission, citing his nondisclosure agreement with the campaign.

Other campaign staffers also singled out Muslims for special scrutiny.

During her time with the campaign, Delgado deplored the appointment of a Muslim-American judge in New York.

“Step by step... this is how American culture will end,” she wrote Feb. 27, saying it was only reasonable to believe that the judge would implement Sharia law.

Delgado said in a telephone interview she stopped working for the campaign in April. She said she did not recall making some of the posts the AP asked her about and does not stand by others.

“If I read the whole thing, I probably wouldn’t have posted it,” she said of one post she shared, a short essay declaring that Muslims are inherently incapable of being good Americans.

Phillip Dann, a field organizer in Massachusetts who recently relocated to Florida, was paid $6,153 between January and March. He shared a meme mocking “Muslim sympathizers.” He also shared an article about Trump threatening to bring back waterboarding “or worse,” and added “where is the gasoline?” Dann told the AP in a phone interview he had no antipathy against Muslims in general.

Dann attributed inflammatory comments of other Trump staffers to the fact that the campaign had drawn on people inexperienced in politics. While he has been politically active for decades - originally as a leftist, he said - he described the field staff Trump acquired in the primary as unfamiliar with traditional campaign rules.

“We get hired because there was no one left,” Dann said. In a later email, he acknowledged some of his and other staff postings were “clearly over the top” - but said that criticism of the posts would amount to intimidation.

Scott Barrish, who earned $12,250 as Trump’s political director for the Tampa Bay, Florida, region, took his views beyond social media posts. In 2011, he drew local press coverage for writing to the head of the nonprofit Council on American-Islamic Relations, an advocacy group for Muslims in the U.S., saying he was wise to its plans to establish a totalitarian theocracy in the United states.

“This is us vs. you,” wrote Barrish. “In the great words of the late President Ronald Reagan, ‘I win, you lose!’”

Separately, Barrish tweeted in 2013 that he hoped America wasn’t headed for civil war, but “if our freedoms must be defended against a tyrannical government, so be it.”

“Those comments at that time were made by me and were my own personal view,” Barrish said in a brief interview with AP. He said he stopped working for Trump’s campaign after the Florida primary. “I don’t want to detract anything from the campaign.”

Many accounts AP reviewed embraced conspiracy theories. Lloyd, the Virginia field director, said Obama is aiding the Iranian nuclear program as part of the president’s “’final solution’ to the Israel problem,” a phrase evoking the Holocaust.

Delgado, the Florida organizer, circulated a theory that the company Edible Arrangements LLC is funneling money to Hamas, a claim that the Anti-Defamation League, a U.S. Jewish organization, has repeatedly dismissed as false.

Unrue posted a link to a website that alleged that the U.S. government assassinated Supreme Court Justice Antonin Scalia​, who died earlier this year after a history of heart trouble.

Racially charged social media posts from Trump campaign employees and associates have already been a repeated source of embarrassment. Trump fired one adviser who had used a racial slur to describe Obama’s children, and the campaign denounced Trump’s longtime Mar-a-Lago butler for saying he would support dragging Obama from the White House and hanging him.

Katie Packer, a 2012 Romney deputy campaign manager who opposes Trump, said the social media posts AP reviewed would have all been immediate disqualifiers for anyone who had applied for a campaign job - even if the postings weren’t visible to the public.

“A comfort level with people who think this is OK is indicative of what you think is OK,” Packer said. “Maybe the campaign just doesn’t know about this, but that’s malpractice.”