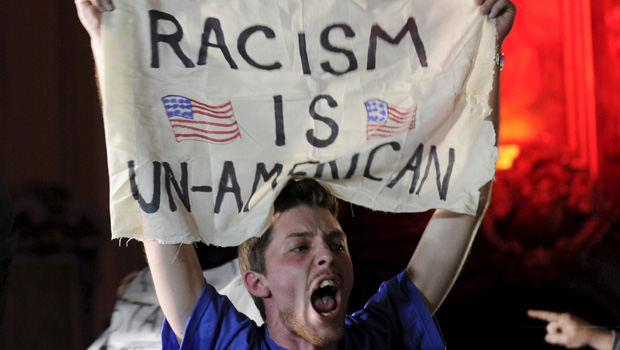 CLEVELAND -- Hundreds of police officers, Secret Service agents and private security guards in cars, on foot and on horseback blanketed the area around Donald Trump's campaign rally Saturday afternoon. Dozens of protesters would soon be ejected from the event.

And that was the calmest rally in the past several days thrown by the front-runner for the Republican presidential nomination.

After months spent goading protesters and appearing to encourage violence, Trump has seen his raucous rallies devolve over the past two weeks into events at which chaos is expected. The real estate mogul is routinely unable to deliver a speech without interruption, and a heavy security presence is commonplace amid increasingly violent clashes between protesters and supporters.

CBS News digital journalist Sopan Deb, who has been embedded with the Trump campaign for months, says protests are nothing new -- but that Trump rallies have recently become more hostile.

"This is nothing new," Deb said in an interview with CBS' "Face the Nation." "However there has definitely been a recent uptick. I have certainly never seen anything like last night. That was unprecedented. There had been other groups of coordinated protests at past rallies but nothing as massive as I saw last night. There were, you know, four or five sections at least taken over by the protesters inside a large arena that could seat almost up to nine, 10 thousand."

On Friday, groupings of well-organized students succeeded in keeping Trump from even taking the stage at a rally in Chicago. Fistfights broke out on the floor of the arena between Trump supporters and anti-Trump demonstrators.

While reporting on the event outside the venue, Deb was handcuffed and charged with resisting arrest -- although video shows he identified himself as a reporter and did not resist.

Saturday morning, a protester rushed the stage at a Trump rally outside of Dayton, forcing Secret Service agents to leap on stage and form a protective circle around him.

Anti-Trump protesters interrupted his speech several times at a campaign event Saturday night in Kansas City, CBS affiliate KCTV reported. A mixture of cheers and booing could be heard as the demonstrators were escorted out.

"Get 'em out of here! Get 'em out," Trump shouted, at times sounding like he was egging on the protesters.

"Hello darlin', go home to mommy," he told one.

Outside, police said they used pepper spray to disperse several hundred people who were divided into two groups after officers felt were preparing to fight.

"We had to use pepper spray 2 times outside Trump rally and arrested 2 people who refused to follow law," Kansas City police tweeted. "Majority of people exercised their rights peacefully. Thank you for that, #KC."

During his speech, Trump encouraged law enforcement to arrest protesters, arguing that fear of an "arrest mark" on people's records may put an end to the near-constant disruption.

Trump said he was "going to start pressing charges against all these people." It would "to ruin the rest of their lives," he claimed, telling supporters if that happened, "we're not going to have any more protesters, folks."

Opponents on both ends of the political spectrum condemned Trump Saturday for what Democratic candidate Hillary Clinton called his "ugly, divisive rhetoric."

"The ugly, divisive rhetoric we are hearing from Donald Trump and the encouragement of violence and aggression is wrong, and it's dangerous," she said, speaking at a canvass kickoff at the O'Fallon Park Recreation Complex in St. Louis. "If you play with matches, you're going to start a fire you can't control. That's not leadership. That's political arson."

"Our leaders -- those who aspire to be our leaders -- should be trying to bring us together and not turning us against one another and speak out against violence and reject efforts to spread fear or turn us against one another," the president told supporters at a fundraiser in Dallas. "And if they refuse to do that, they don't deserve our support."

Republican National Committee Chairman Reince Priebus said in a statement Saturday that political leaders in both parties have a responsibility to ensure that the "discourse we engage in promotes the best of America."

"While we have differences, the exercise of our right to free speech should be just that: speech," Priebus said. "Violence is never the answer. Violence only begets violence."

"Frankly, I'm a little shocked that we got to this point, I'm shocked at it," said Ohio Gov. John Kasich, who is vying with Trump to win his home state's winner-take-all primary on Tuesday.

"We cannot create in this country a toxic environment where images of people slugging it out at a campaign rally, think about it, are transmitted all over the globe," he said.

Florida Sen. Marco Rubio appeared to waver Saturday on his promise to back the eventual GOP nominee if Trump won the primary race.

"We are being ripped apart at the seams now, and it's disturbing and I am sad -- I am sad for this country," Rubio told reporters in Largo, Florida. "This country is supposed to be an example to the world."

When asked if he would still back the eventual Republican nominee if it was Trump, Rubio responded: "I don't know."

"I still at this moment continue and intend to support the Republican nominee, but, getting harder every day," he said. An email sent out by Rubio's campaign later Saturday referred to the scenes from the cancelled Chicago rally as something "we would see in a third-world country."

While Trump sometimes appears angered by the disruptions, he has also embraced them, using the interruptions as opportunities to lead his supporters in chants of "USA, USA." He's also joked about how the protesters force TV cameras to pan out over the crowd and show how large they are.

But the confrontations began to escalate this month, most notably at a Trump event in New Orleans. A steady stream of demonstrators interrupted Trump's speech, including a huddle of Black Lives Matter activists, who locked arms and challenged security officials to remove them.

There were skirmishes throughout the speech, mostly pushing and shoving, although one man was captured on video biting someone.

This week, an older white Trump supporter was caught on video punching a younger African-American protester as police led the protester out of a rally in North Carolina. The supporter, later charged with assault, told an interviewer the next time he confronted a protester, "We might have to kill him."

Two days later, police arrested nearly three dozen people at a rally in St. Louis that was interrupted so many times by protesters that Trump joked about how long it was taking him to complete his remarks.

Hours before Trump was scheduled to appear Friday night at the University of Illinois at Chicago, the atmosphere inside a campus arena was crackling as protesters and supporters shouted back and forth, arms raised and yelling in each other's faces.

Some of the protesters, many of whom said they supported Democratic candidate Bernie Sanders, said they planned to rush the stage when Trump came out to speak. They didn't get the chance, as Trump called off the rally before even getting to the venue.

"It feels amazing, everybody came together," said Kamran Siddiqui, 20, and a student at the school. "That's what people can do. Now people got to go out and vote because we have the opportunity to stop Trump."

The next morning, Trump was mid-speech when a man, later identified by authorities as Thomas Dimassimo of Fairborn, Ohio, jumped a barricade and rushed at Trump. He was able to touch the stage before he was tackled by security officials.

Trump initially laughed it off, but later in the day, said Dimassimo had ties to ISIS. Experts who watched a video Trump tweeted as evidence called the allegation "utterly farcical."

"Trump's accusations about it being linked to ISIS serve only to underline the totality of his ignorance on this issue," said Charles Lister, a fellow at the Middle East Institute.

At the Cleveland rally, more than a dozen officers on horseback patrolled the outside as police helicopters buzzed overhead. Hundreds of officers massed inside to block some exits and sweep the audience out after the event ended.

More than 50 protesters, including a pair of doctors who removed sweat shirts to reveal white T-shirts printed with "Muslim Doctors Save Lives in Cleveland," were told to leave.

Brandon Krapes said he was punched repeatedly after he held up his sign, which said, "Trump: Making America Racist Again." His 17-year-old son Logan had a freshly bruised cheek from what he said was a punch in the face he received while trying to help his father.

"The sheer amount of hatred in there is so blatant, and Trump does nothing to stop it," said Sean Khurana, a 23-year-old Cuyahoga Community College student, who is Indian-American. He said someone called him "ISIS" as he stood in line. "He provokes it."

"Just finished my second speech," he wrote. "20K in Dayton & 25K in Cleveland- perfectly behaved crowd. Thanks- I love you, Ohio!"