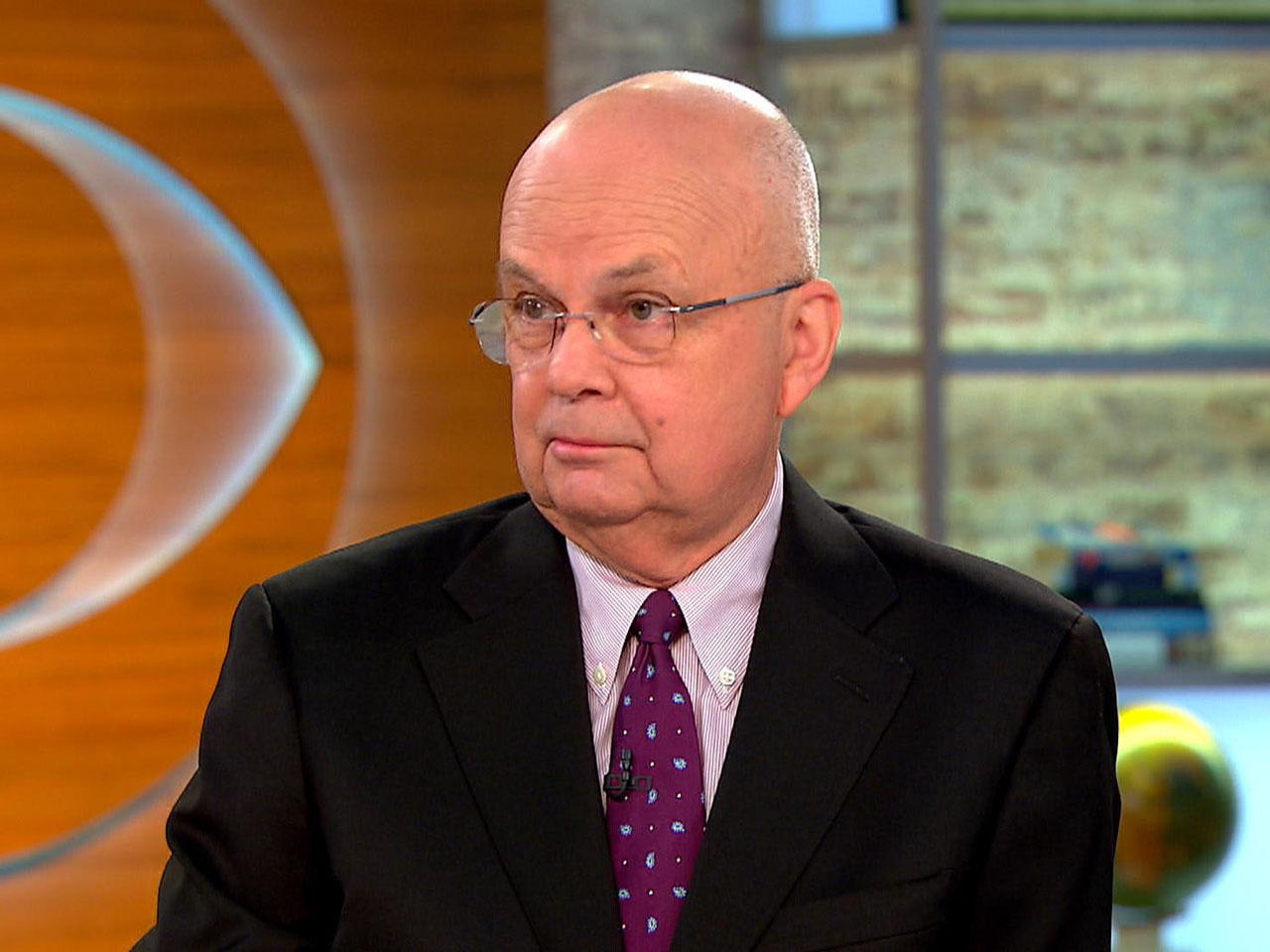 When informed that Putin invaded Crimea -- an autonomous part of Ukraine -- two years ago to annex it to Russia, Trump responded, "Well, he's there in a certain way. But I'm not there yet; Obama is there. And frankly, that whole part of the world is a mess under Obama. With all the strength that you're talking about and all of the power of NATO and all of this. In the meantime... he takes Crimea."

In a statement, Hillary Clinton's campaign said of Trump's comments, "This is scary stuff, and it's yet more proof why Donald Trump is temperamentally unfit and totally unqualified to be commander-in-chief."

When asked on "CBS This Morning" about Trump's comments, Gen. Michael Hayden -- a former director of the National Security Agency and the CIA -- said, "Well, it certainly was a fact-free description of what's going on in the Ukraine."

Co-anchor Gayle King asked if Hayden agreed with Hillary Clinton's characterization of Trump's comments and making him "totally unfit and unqualified to be commander-in-chief"?

"That would add to a body of evidence that would actually draw one towards that conclusion," Hayden said. "We'll see what happens over the life of a campaign where there is a chance to recover. But right now, that statement there, again, devoid of facts and divorced from traditional American and traditional European policy.

"That was the violent change of a European border with the annexation of Crimea, which he says he might be fine with at some point in the future. Beyond just what's happening in the Ukraine, can you actually live with a Europe in which you can change borders based upon popular sovereignty? How much more violent would the continent become?"

King asked about the intelligence briefings that the Democratic and Republican Party nominees will now be eligible to receive: "What exactly does that mean, and do you think this is a good idea for both candidates?"

"It's a necessary idea," Hayden said. "It's not quite what the Constitution requires. It's not written down, but it is our protocol. You get the nomination of one or both of those parties, [then] you are entitled to some classified information."

King noted that it has been suggested that Donald Trump get "fake" briefings.

"The sitting president has to treat both candidates perfectly equally," Hayden said.

He clarified, though that the candidates will not get daily briefings. "They're too busy. They've got lots of other things going on. I suspect we may have a few, and it's just a few seminar-like discussions. This is going to look like one of those think-tank seminars on steroids. This isn't going to be 'Let me show you the covert actions.'

"But even candidates less talkative than Mr. Trump are frightened about trying to sort out in their minds, when they get the unexpected question from folks like yourself, 'Did I learn that in the briefing or did I read that in the paper?' And they want to keep those challenges to a minimum until Election Day."

"Saying those things is unprecedented," Hayden said. "This should be normal. This is just the routine run of the American electoral process. You have candidates that have actually done and said things that make serious people question their suitability about getting information, but they're going to get it."

But, he added, they will not be privy to the same level of classified information which is presented daily to the President of the United States.

"The briefings between now and the election will be very vanilla; they will be 'classified lite,'" Hayden said. "Somebody on Wednesday morning after the first Tuesday after the first Monday is getting the president's daily brief. You take Ohio, you take Florida, you take Pennsylvania, that's all you need to get the secrets."

On the matter of the recent cyber attacks upon the Democratic Party and the Clinton campaign, which has been linked to Russian hackers, "CBS This Morning" co-anchor Charlie Rose asked Hayden, "Number one, are we convinced they did it? Is everybody in the intelligence community convinced they did it? Two, Did they do it because they want to manipulate the election? Three, how do we retaliate?"

"I think they did it," Hayden replied, adding that this is the consensus opinion. "In the cyber domain, sometimes you can't get to that court of law, 'beyond no reasonable doubt' [level of certainty]. You've got to act even in the face of some lingering doubts. I think the Russians did it.

"Why? First of all, the stealing of the data, Charlie, that's generally-accepted state espionage -- that's an important political party in an important country. Stealing that stuff is what big nations, including our own, do to other big nations.

"They did something else, though: They weaponized the information. They used the information to, at a minimum, play with our heads. I really don't think [Putin's] got the wherewithal, the wisdom, the cleverness, to use the data to affect the outcome of the campaign. I think he's just playing with our heads. He thinks we do this to him all the time. He thinks we did the Orange Revolution. He thinks we did the Rose Revolution. He's trying to just give us a taste of our own medicine.

"With regard to our retaliation, you don't need to pull the trigger, so to speak, in the cyber domain. This becomes part of that broad package of Russian behavior ... requiring a broader -- to my view, tougher -- American response."