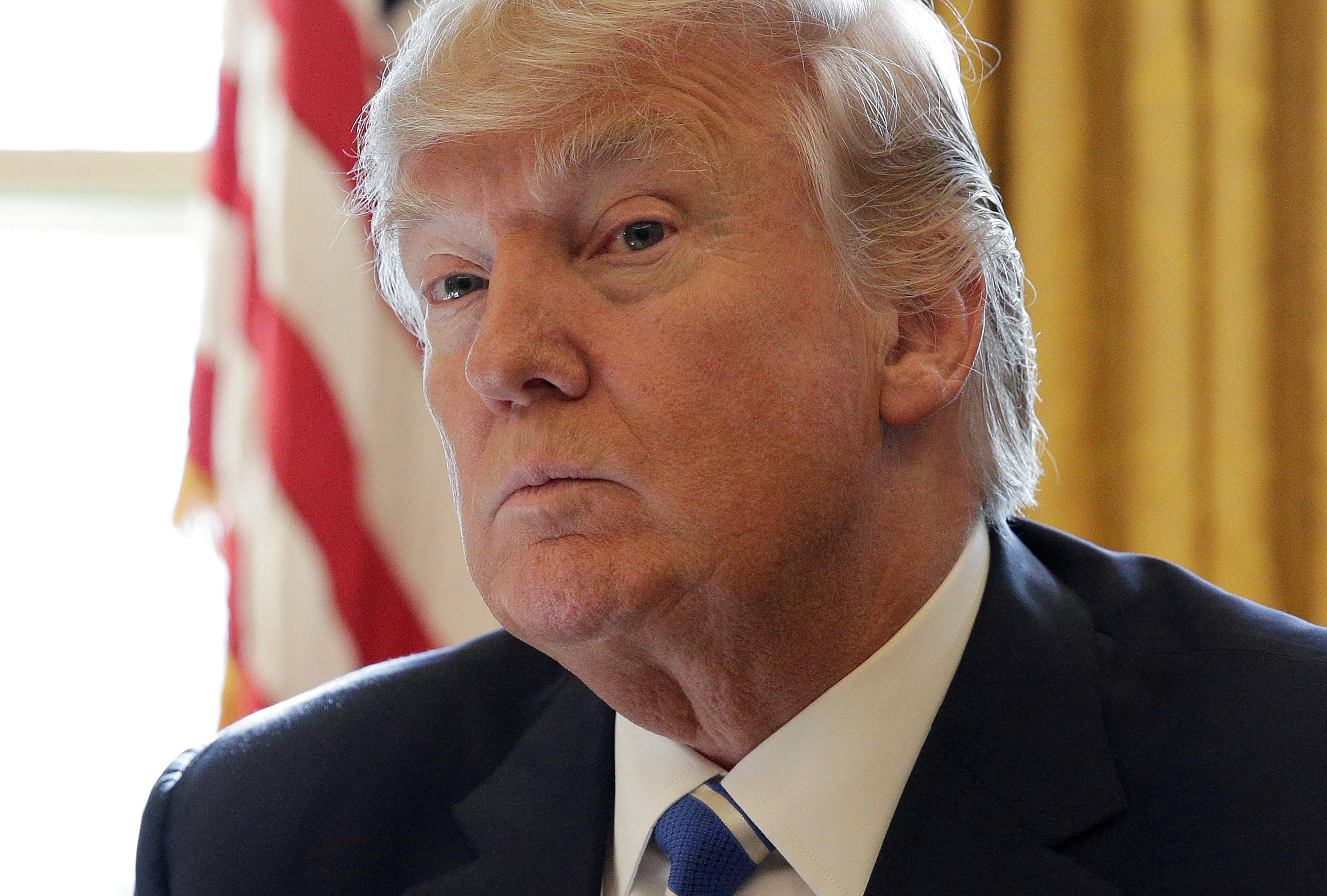 The president visited the Boeing plant in North Charleston, South Carolina, where the Dreamliner 787-10 is built. He’ll make remarks at 12:45 p.m. after touring the newest version of the plane.

His message today, he told them, was that America “is going to start winning again,” and he promised to fight for more jobs and more better-paying jobs “for the loyal citizens of our country.”

The president’s visit came just after the workers at the plant overwhelmingly voted against unionizing.

From Charleston, he travels to Mar-a-Lago for the weekend.

State Dept layoffs under Rex Tillerson being carried out

“The Takeout” - The leakers and the liars

That information has been filtering out in leaks to major news outlets, a trend that’s angering the president, who has railed against leaking in tweets and speeches, as well as in Thursday’s news

The combative attorney President Donald Trump picked to be his ambassador to Israel said Thursday that he regrets using “inflammatory rhetoric” during the “highly charged” 2016 presidential campaign.

Dubke will take the job that was offered to Jason Miller, who declined to accept the the White House job shortly after he was tapped to lead the communications office in December.

During his hastily arranged news conference, Donald Trump talked about a meeting with Maryland Rep. Elijah Cummings that has yet to take place.

“I actually thought I had a meeting with Congressman Cummings, and he was all excited,” the president recalled. “And then he said, ‘Well, I can’t move, it might be bad for me politically. I can’t have that meeting.’”

“Very nice guy,” though, Mr. Trump said of Cummings. He speculated that Cummings “probably was told by Schumer or somebody like that, some other lightweight. He was probably told - he was probably told ‘don’t meet with Trump. It’s bad politics.’”

Cummings, as it turned out, watched the entire hour and 15 minute presser by the president, and he told CBS News’ Catherine Reynolds and Alan He that he didn’t expect Mr. Trump to bring up their yet-unscheduled meeting.

While Mr. Trump is stateside, his vice president, secretary of state, defense secretary and chairman of the Joint Chiefs are traveling abroad.

Secretary of State Rex Tillerson participates in the G20 summit in Bonn, Germany, where he’ll be meeting with Foreign Ministers Wang of China and Alfano of Italy.

President Trump announced his new Labor secretary nominee,  less than a day after Andrew Puzder withdrew his name from consideration for the post.  It’s lawyer Alexander Acosta, whom the president met with Wednesday.

Sources close to the situation told Garrett Harward and the administration had a dispute over over staffing the security council.

Asked by Major Garrett about three recent examples of recent Russian aggression against the U.S., the president said, “I’m going to see what happens,” Mr. Trump said. “They all happened recently and I understand what they’re doing … I’m not going to tell you anything about what response I do. I don’t talk about military response.”

President Trump’s freewheeling press White House press conference Thursday -- in which he announced his new labor secretary pick -- also included an awkward exchange on race, after a reporter asked him about his policies to improve inner cities.

“You go to some of the inner city places and it’s so sad when you look at the crime,” the president said. He went on to describe how people “lock themselves into apartments petrified to even leave in the middle of the day” in urban areas for fear of crime in the cities.

Journalist April Ryan, who serves as the White House correspondent and Washington bureau chief for American Urban Radio Networks, followed up: “When you say the inner cities, are you going to include the CBC, Mr. President, in your conversations with your urban agenda?”

When Mr. Trump seemed unfamiliar with the “CBC” acronym, Ryan, who is black, clarified: “Are you going to include the Congressional Black Caucus -- “

The president interrupted: “Well I would. I’d tell you what -- do you want to set up the meeting?

During a lengthy press conference Thursday, President Trump announced his intention to replace the existing version of his travel ban with a new executive order, previewing the action that could come as early as “next week.”

“We’re issuing a new executive action next week that will comprehensively protect our country,” Mr. Trump told reporters gathered in the White House’s East Room, for a press conference to announce his newest labor secretary pick. “So we’ll be going along the one path and hopefully winning that, at the same time we will be issuing a new and very comprehensive order to protect our people. That will be done sometime next week, toward the beginning or middle at the latest part.”

Later, he defended his original executive order, which immediately paused the U.S. refugee program and barred any citizen of seven predominantly Muslim nations from entering the country.

President Trump declined to answer a question Thursday about how his administration plans to combat a rise in anti-Semitism, and instead told the Jewish reporter asking it to sit down and called it “not a fair question.”

During a press conference at the White House that lasted for more than an hour, a Jewish reporter expressed concern about growing anti-Semitism and said, “What we haven’t really heard being addressed is an uptick in anti-Semitism and how the government is planning to take care of it.” The reporter then referenced a spate of bomb threats against Jewish Community Centers across the U.S. over the last month or so, and then was interrupted by the president.

“He said he was going to ask a very simple, easy question. And it’s not. It’s not a simple question, not a fair question,” Mr. Trump said. “Okay, sit down. I understand the rest of your question. So here’s the story folks. Number one, I am the least anti-Semitic person that you’ve ever seen in your entire life. Number two, racism. The least racist person.”

Donald Trump mounted an aggressive defense of his young presidency Thursday, lambasting reports that his campaign advisers had inappropriate contact with Russian officials and vowing to crack down on the leaking of classified information.

Nearly a month into his presidency, Trump insisted in a free-wheeling White House news conference that his new administration had made “significant progress” and took credit for an optimistic business climate and a rising stock market.

The president denounced media reports of a chaotic start to his administration marked by his contentious executive order - rejected by a federal appeals court - to place a ban on travelers from seven predominantly Muslim nations. Trump said he would announce a “new and very comprehensive order to protect our people” next week.

“This administration is running like a fine-tuned machine,” Trump declared in a lengthy news conference that saw the new commander in chief repeatedly interrupting reporters’ questions and airing his grievances.

In tweets, President Trump threatened to catch Washington’s “low-life leakers” to the press, following a report in the New York Times alleging his campaign had repeated contact with Russian officials prior to the 2016 presidential election.

The Senate may vote on the confirmation of Mick Mulvaney to be OMB director.

What Trump’s travel ban means to one new U.S. citizen

Five days after Donald Trump signed his travel ban, a young Iraqi named Layth Baheej wiped away tears as he took the oath of citizenship and listened to a U.S. immigration official in Baltimore welcomed him to be a full participant in American democracy.

Four of his siblings were killed in the war, and Baheej hopes he’ll be able to bring his surviving siblings and his parents to join him here, but Mr. Trump’s ban has cast a shadow over those hopes. Rebecca Kaplan reports.