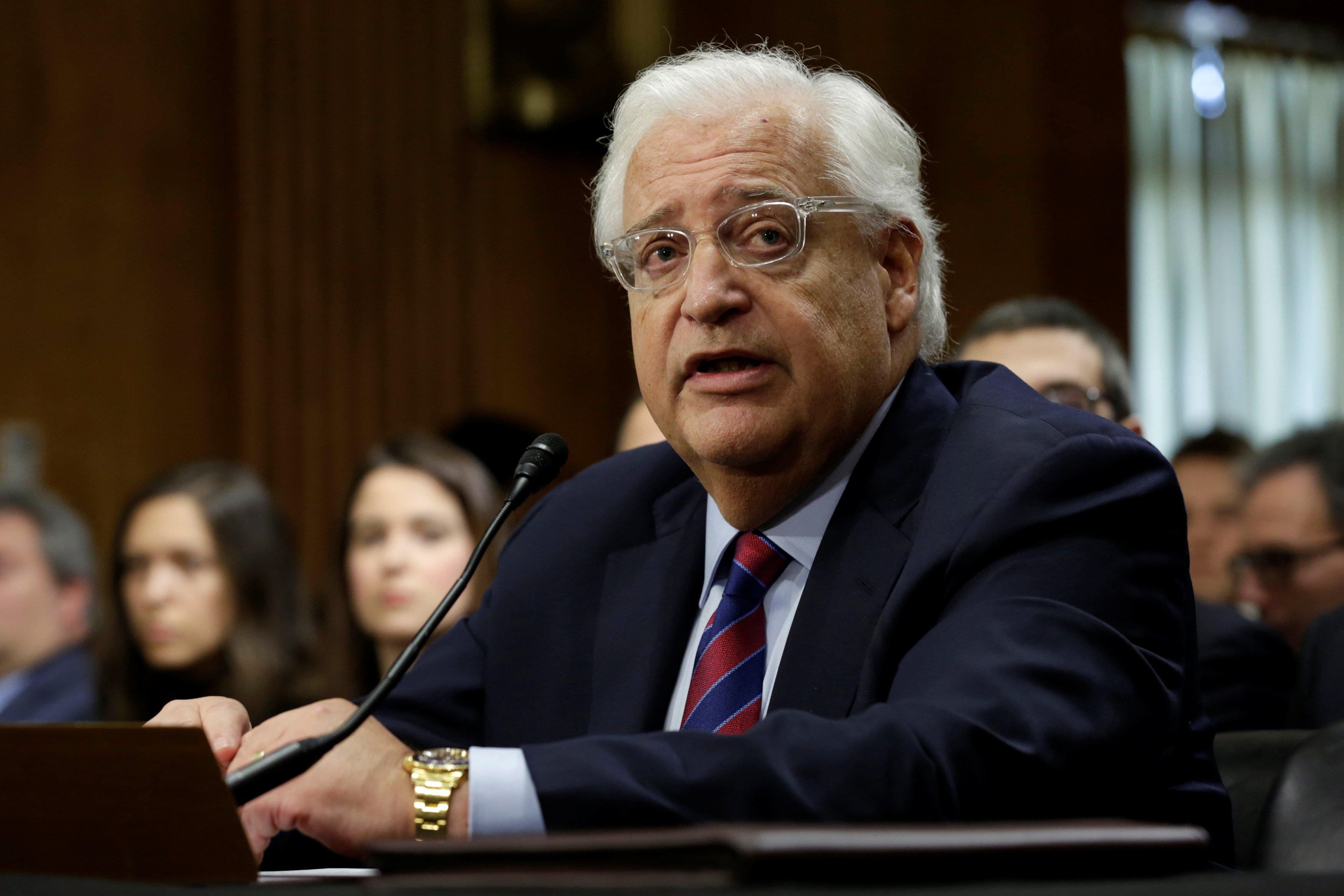 WASHINGTON — The combative attorney President Donald Trump picked to be his ambassador to Israel said Thursday that he regrets using “inflammatory rhetoric” during the “highly charged” 2016 presidential campaign.

On Thursday, the Anti-Defamation League (ADL) also accepted Friedman’s apology for past inflammatory comments about the group.

In a tweet, the ADL’s CEO Jason Greenblatt said Friedman had “reached out” to the organization and that they had accpeted his apology and “appreciate his outreach.

Here’s a look at the other statements made at Friedman’s hearing:

FRIEDMAN: Asked about the Trump administration’s position on a two-state solution, he said he would be delighted to see a peace deal giving Palestinians an independent state. But he acknowledged skepticism “solely on the basis of what I’ve perceived as an unwillingness on the part of the Palestinians to renounce terror and accept Israel as a Jewish state.”

He said Palestinians had failed to “end incitement” of violence, and terrorism had increased since the Oslo Accords in the 1990s, intended to be a stepping stone toward Palestinian statehood.

THE FACTS: Not all Palestinians are the same.

The Palestinian Liberation Organization, the group that formally represents all Palestinians, officially denounced terrorism decades ago, although attacks have continued to be a problem for Israel in the years since. Palestinian President Mahmoud Abbas, in office since 2005 and in charge of autonomous enclaves in the Israeli-occupied West Bank, has spoken out against violence, saying it undermines Palestinian statehood aspirations.

Hamas refuses to renounce violence or recognize Israel. Hamas controls the Gaza Strip after seizing it in 2007 in a violent takeover and setting up a government there to rival Abbas’ West Bank-based Palestinian Authority.

As far as Israel being a Jewish state, Abbas, current head of the PLO, says the Palestinians met their peace requirements by recognizing Israel, and it’s not up to them to determine the religious nature of the state of Israel.

FRIEDMAN: Asked whether under Palestinian law the Palestinians were “rewarding terrorists” and whether there was an “increasing incentive” based on the number of people a terrorist murdered, said, “Exactly true.”

Israel has long scoffed at the Palestinian fund for “martyrs,” set up in 1967 by the PLO, arguing that the payments it makes are an incentive to kill Israelis. The fund makes monthly payments to roughly 35,000 families of Palestinians killed or wounded in the conflict with Israel and had a budget last year of $170 million, Palestinian figures show. Recipients include relatives of Palestinian suicide bombers.

But the fund doesn’t pay people in advance to carry out attacks. The Palestinians argue the fund helps support Palestinian victims of Israel’s occupation, including families of those driven to attack by the dire conditions of occupation or by a desire to avenge others killed by Israelis.

FRIEDMAN: Asked about his connections to Beit El, a settlement of religious nationalists near Ramallah in the West Bank, Friedman said his affiliation had been as the president of a group called American Friends of Beit El Yeshiva, the U.S. fundraising arm of the settlement’s Jewish seminary and affiliated institutions. He said the money he’d helped raise had gone toward educational facilities like dormitories, gymnasiums and classrooms.

“It primarily derives from my commitment to Jewish education,” Friedman said of his involvement with Beit El. “The quality of those schools is excellent.”

THE FACTS: It’s true that the funds Friedman’s group raises help support the settlement’s educational activities. But Friedman appears to be playing down his family’s long association with Beit El.

In addition to supporting Beit El’s institutions, which include high schools and an Israeli military academy, Friedman has written numerous columns for Arutz Sheva, a right-wing news site affiliated with Beit El. It was in some of those columns that Friedman made controversial comments that have attracted attention since his nomination.

In Beit El, his and his wife’s names are on the facade of the Friedman Faculty House, which the anti-settlement watchdog Kerem Navot says is built on private Palestinian land without permission from its Palestinian landowners.