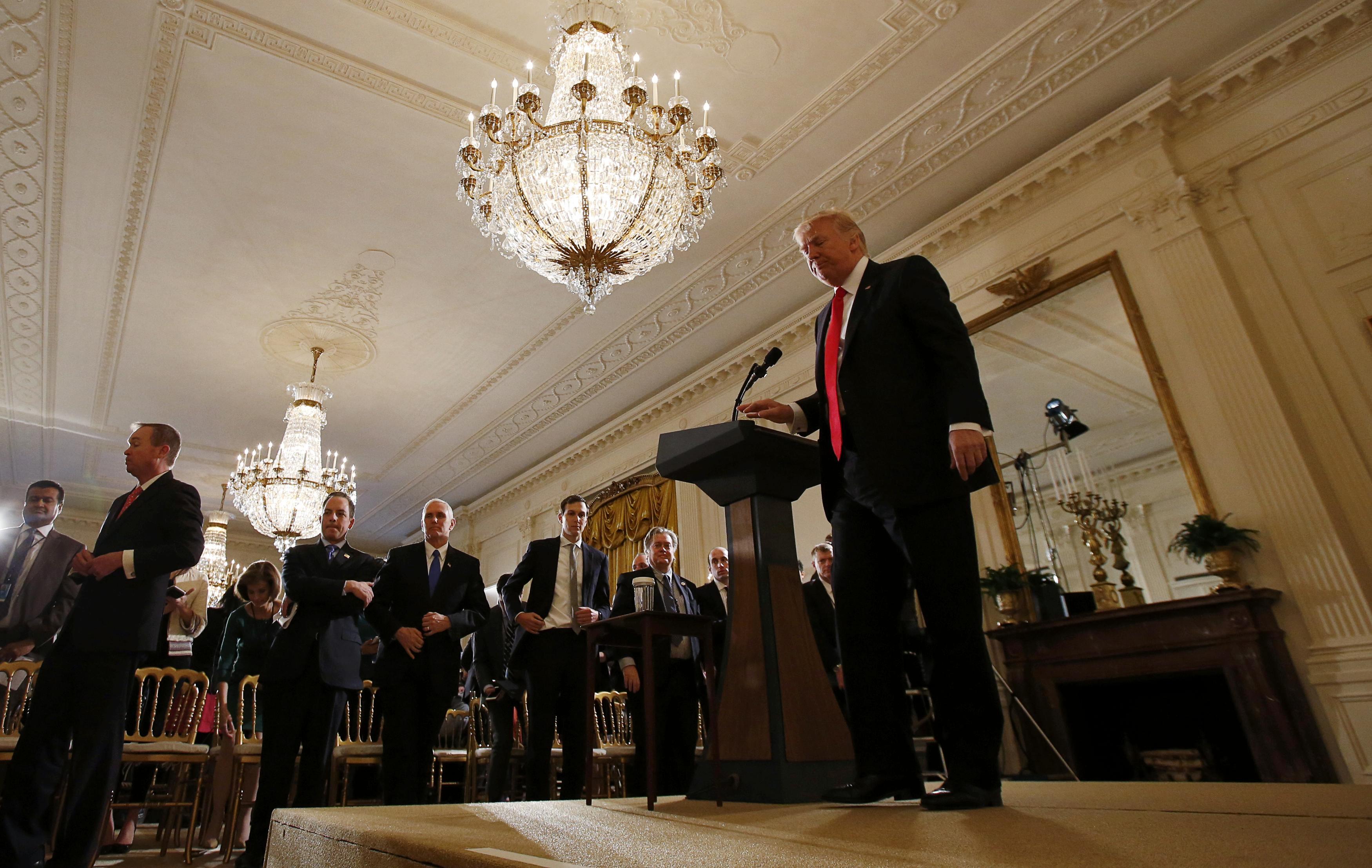 WASHINGTON -- Donald Trump mounted an aggressive defense of his young presidency Thursday, lambasting reports that his campaign advisers had inappropriate contact with Russian officials and vowing to crack down on the leaking of classified information.

Nearly a month into his presidency, Trump insisted in a free-wheeling White House news conference that his new administration had made “significant progress” and took credit for an optimistic business climate and a rising stock market.

The president denounced media reports of a chaotic start to his administration marked by his contentious executive order - rejected by a federal appeals court - to place a ban on travelers from seven predominantly Muslim nations. Trump said he would announce a “new and very comprehensive order to protect our people” next week.

“This administration is running like a fine-tuned machine,” Trump declared in a lengthy news conference that saw the new commander in chief repeatedly interrupting reporters’ questions and airing his grievances.

Throughout the encounter the new president delivered recurring criticism of the news media, accusing it of being “out of control” and promising to take his message “straight to the people.”

He dismissed recent reports in The New York Times and on CNN that Trump campaign aides had been in contact with Russian officials before his election. Trump called Paul Manafort, his former campaign manager who has ties to Ukraine and Russia, a “respected man.”

Pressed repeatedly, Trump said that “nobody that I know of” on his campaign staff had contacted Russian officials. He called such reports a “ruse” and said he had “nothing to do with Russia.” Trump added, “Russia is fake news. This is fake news put out by the media.”

Amid reports of widespread leaks within his administration, Trump also warned that he would clamp down on the dissemination of sensitive information, saying he had asked the Justice Department to investigate. “Those are criminal leaks,” adding, “The leaks are real. The news is fake.”

He blamed any problems on the outgoing Obama administration. “I inherited a mess at home and abroad - a mess,” Trump said.

Democrats said Trump’s refusal to say for sure that his campaign staff wasn’t in contact in the Kremlin underscored the need for an independent investigation through a special congressional select committee, a commission styled after the review of the 9/11 attacks or an independent counsel from the Justice Department. “His silence speaks volumes,” said Adrienne Watson, a spokeswoman for the Democratic National Committee.

The president announced that Alexander Acosta, the dean of the Florida International University law school, would be his nominee for Labor secretary. That came a day after fast-food executive Andrew Puzder withdrew his nomination for Labor after losing support among Republican senators.

Trump, a reality television star and real estate mogul who was elected as an outsider intent on change, said his ousted national security adviser, Michael Flynn, was “just doing his job” in talking with Russian officials before the inauguration. But he said he was “not happy” with how Flynn described his phone call with a Russian diplomat to Vice President Mike Pence.

Trump knew for weeks that Flynn had misled Pence but did not inform the vice president, according to a timeline of events supplied by the White House.

Trump said he had identified a strong replacement for Flynn, which made the decision to let him go easier.

Addressing immigration, one of the biggest issues of the past campaign, Trump said it was difficult dealing with the policy known as DACA, which allows young adults to get work permits and Social Security numbers and protects them from deportation. Referring to the Deferred Action for Childhood Arrivals rule, he said he would “deal with DACA with heart.”

While Trump has promised to halt illegal immigration as a cornerstone of his administration, he has also promised to focus on people who have committed crimes. He said he had the “best lawyers” working on the policy now and the “new executive order is being tailored to the decision we got from the court.”

Earlier in the day, Trump had a breakfast meeting with some of his staunchest House supporters.

The White House has said Trump asked for Flynn’s resignation because he had misled Vice President Mike Pence over his dealings with Russia and whether he had discussed sanctions with Russia’s ambassador to the U.S. before Trump’s Jan. 20 inauguration. Flynn previously had denied those conversations to Pence and other top officials.

On Thursday, he warned in a pair of tweets that “low-life leakers” of classified information will be caught. As journalists were being escorted out of the breakfast meeting, Trump responded to a reporter’s question on the subject by saying: “We’re going to find the leakers” and “they’re going to pay a big price.”