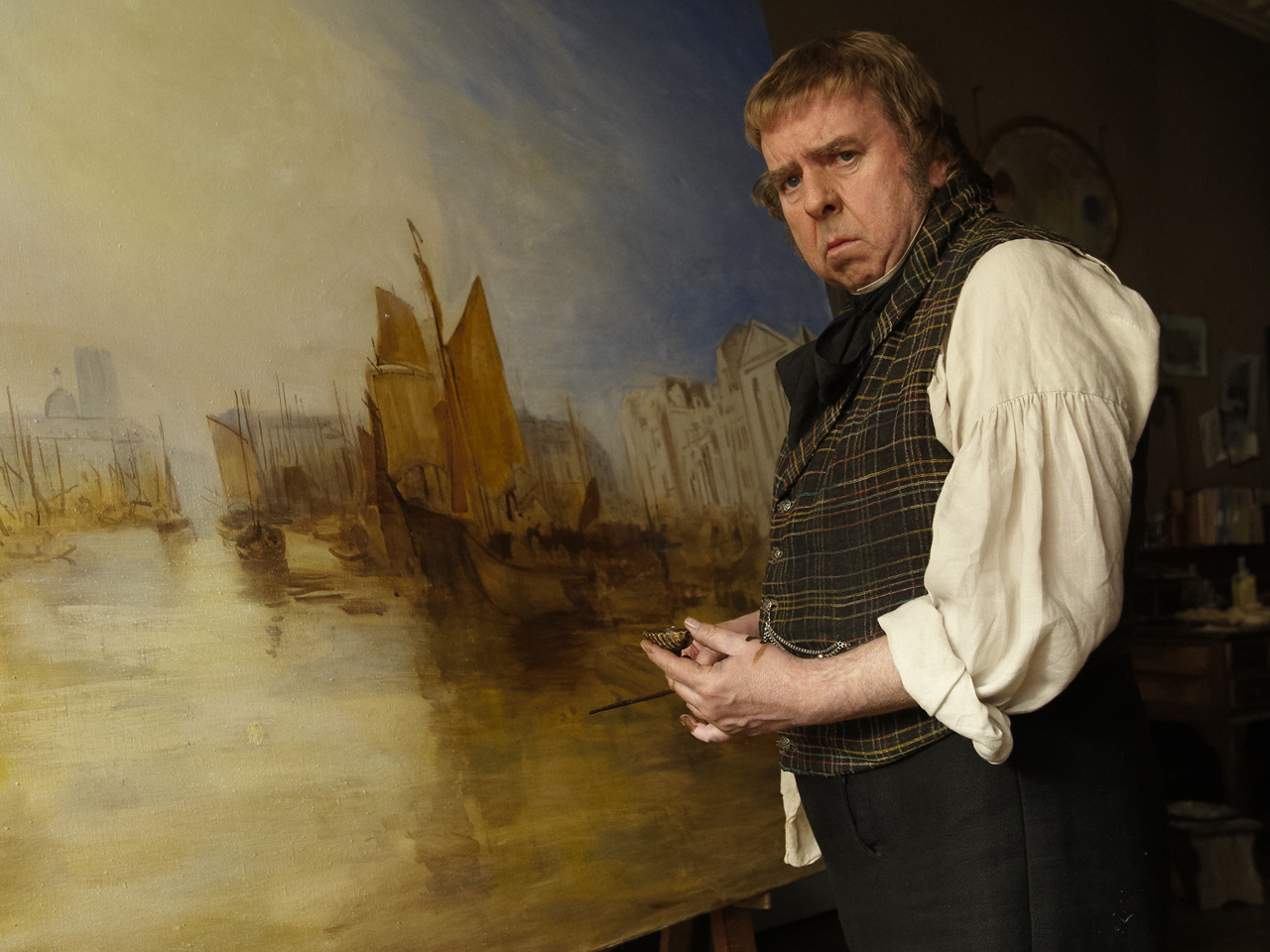 In the 1990 film, "Akira Kurosawa's Dreams," in which filmmaker Martin Scorsese played Vincent Van Gogh, the artist tells a young acolyte, "The sun, it compels me to paint."

That compulsion to render life on a canvas is given quite a different take by Mike Leigh in his meticulously colored biography, "Mr. Turner," about Britain's greatest artist.

J.M.W. Turner rose from a working class background to produce paintings that graced the very large walls of the landed gentry's estates. But his manner in producing artworks, discussing them, even competing against other painters within the halls of the Academy was that of a craftsman who diligently plied his trade. He would get out of bed and "go to work," which might encompass having himself tied to the mast of a ship in a storm in order to experience and see the violence of nature, and then render it with blazing brushstrokes at his home in London.


Director Mike Leigh's films -- typically produced through a lengthy rehearsal and improvisational period, to attain a naturalism that is all too uncommon in movies -- have previously examined the behavior of starry-eyed strivers seeking success ("Life Is Sweet") or the self-destructive behavior of life's losers ("Happy-Go-Lucky").

In "Mr. Turner," Leigh looks at the artistic process and how a creative genius must navigate the shoals of public opinion (and in the case of Turner, producing art that goes against fashion). But unlike his 1999 tale, "Topsy Turvy" (about the tensions in the relationship between Gilbert & Sullivan, out of which came the glorious "Mikado"), Leigh's new film is less about art as a motivating factor for one's life and more about the character of a man who produces great art.

While Turner is remembered for his landscapes, less well-known is his private life, and the circumstances that colored his artwork: the death of a sister; committing his mother to the insane asylum at Bedlam; his illegitimate children, whom he rejected; and his relationships with women of various stations. In some cases these attributes were characteristic of "a man of his time" (to paraphrase Turner's own description of an earlier artist), and in other cases demonstrated a form of enlightenment.

In addition, Turner's genius was as much for what he did as for what he presaged: the Impressionist movement that rejected the Romanticism of the mid-19th century, which may have pleased the royalty but to Turner was like a cinder in his eye.

Timothy Spall (winner of the Best Actor prize at this year's Cannes Film Festival) does not portray Turner as a visionary or an innovator so much as a craftsman unwilling to compromise to the standards of others. Yet he could also look down his nose at other painters who willingly "suffer" for their art, as if they were not taking their trade as seriously as the barber's son who began earning his keep at age 12 through the use of a brush.

Spall's Turner is complicated without being particularly hard to read. Though he often has difficulty communicating beyond convenient grunts, Turner's attitudes are pretty transparent, though we may not be privy to the reasoning behind them (such as why he rejects the two grown daughters that just happen to bear another man's surname).

There is also the matter of Turner's relationship with his housekeeper, Hannah (Dorothy Atkinson), an unmarried niece of his former lover, which the filmmakers suggest involved more than her dusting and mixing paint.

The artistic contributions by the filmmakers -- particularly by cinematographer Dick Pope (shooting in digital), production designer Suzie Davies and composer Gary Yershon -- are exquisite, and entirely of a piece with the vision of Turner -- his own high standards applied to capturing the rapture of an English sunset, and the emotions such a sight evokes.

"Mr. Turner" is Rated R for sexual situations, and will be released by Sony Pictures Classics on Dec. 19.

To watch a clip of Timothy Spall as J.M.W. Turner in "Mr. Turner," click on the video player below.

To watch the international trailer for "Mr. Turner" click on the video player below.