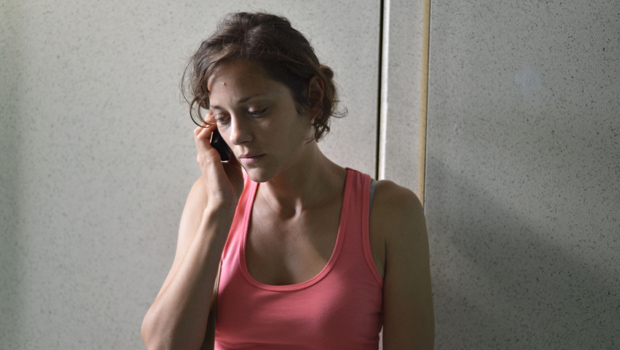 You can count on Marion Cotillard. From her Oscar-winning recreation of Edith Piaf in "La Vie en Rose," to her work in such films as "Midnight in Paris," "Rust and Bone," "Inception," "A Good Year," and "The Immigrant," she seems incapable of appearing untruthful on screen.

In the Belgian film "Two Days, One Night" (which had its U.S. premiere yesterday at the New York Film Festival), Cotillard stars as Sandra, a worker at a solar panel factory who has been out on leave owing to a medical crisis. Having worked her way back to recovery, she learns that -- due to budget constraints -- her job has been put up to a vote. Her coworkers, asked to decide between receiving a bonus or keeping Sandra on staff, opted for the bonus.


A pink slip is the last thing the financially-strapped and emotionally fragile young mother needs. Though convinced that there is nothing in her power to change fate, she is urged by her husband to embark on a weekend's mission, to talk one-on-one with her coworkers and plead her case -- convince them to vote against their self-interests so that she can keep her job.

The stakes are high, but the challenge is higher. Sandra fears that even if she were able to sway a majority of co-workers to vote her way, the antipathy among the staff denied their 1,000-euro bonus would make it impossible for her to continue on the job anyway. Just how can one win when faced with a lose-lose proposition?

With forthrightness and without cloying sentiment, the director-brothers Jean-Pierre & Luc Dardenne ("La Promesse," "Rosetta," L'enfant," "The Kid With a Bike") present a string of ethical dilemmas for Sandra and the others to weigh. Her request challenges her fellow employees to make a financial and ethical judgment that affects not just themselves but also their families, their friendship, and their sense of fairness. What would you do, on either side of the equation? And what does the fact that workers are being put into that difficult position by their boss say about the state of the economy, capitalism, or society as a whole?

There is also the toll that this mission takes on Sandra, who finds herself constantly being judged and either accepted or rejected, her hopes raised or dashed. The twists and turns of her apparent fortune drive Sandra back to the dark recesses that severely disturbed her family, threatening their ability to put a dire situation behind them.

Cotillard, who carries the entire film, succeeds in maintaining that delicate balance of hope and despair throughout her struggle, especially as she is forced to make ethical choices of her own. We feel her pain even when she puts on a smile, and still register her optimism when she appears to hit the skids.

Equally good is Fabrizio Rongione as her husband, Manu, who pushes Sandra as far and hard as he can, knowing just how delicate she is and what it would mean for his family or her to break apart again.

"Two Days, One Night" is Belgium's entry to the Academy Awards' Best Foreign Language Film category, and will be released in the U.S. by Sundance Selects on December 24. In French with English subtitles. Running time: 1:35. The film is not yet rated.

To watch a trailer for "Two Days, One Night" (in French), click on the video player below.