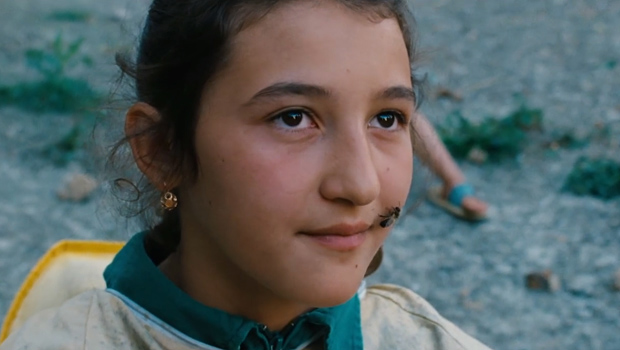 She's only 12 years old, but she is practically the head of the family -- at least she exhibits the most common sense.

The eldest daughter of a farm family leading an almost gypsy-like existence in Tuscany, Gelsomina (Maria Alexandra Lungu) is being groomed to take over the family's ramshackle beekeeping operation. Her father, Wolfgang (Sam Louwick), seems not particularly interested in money or success, but rather in creating a protected, isolated world for his family that doesn't buy into contemporary society. Wolfgang sleeps in the open air, buys exotic animals on a whim, and assigns Gelsomina the hardest tasks of the operation, which she performs with aplomb.

The magical thinking of the adolescent Gelsomina -- seeing something beyond the hard-scrabble, mundane tasks of clearing out bee colonies -- is fueled by her chance encounter with a film crew shooting a Felliniesque commercial, in which a starlet (Monica Bellucci) advertises a cheesy TV competition for local farmers. First prize: 1,000 euros.

Gelsomina is confident their honey would win, but she has to overcome resistance from her dad, as well as the difficulties of eeking out a harvest of honey from bee colonies susceptible to pesticides, bad weather, and less-than-careful younger siblings.

"The Wonders (Le Meraviglie)," winner of the second-place prize at this year's Cannes Film Festival, has its North American premiere today at the New York Film Festival. It is a luminous tale of adolescence, and of a young girl's growing awareness about both possibilities and limitations.

The film's farm location, which looks like a squatter's domain, has none of the romance audiences might associate with the Italian countryside; it's a hard, unforgiving lifestyle, which you are born into and die out of. And yet the little glitter of glamour that the TV competition brings to the region, in search of shining examples of traditional agriculture, appears alien, almost unholy.

Written and directed by Alice Rohrwacher (whose first feature, "Heavenly Body," was a festival favorite in 2011), "The Wonders" successfully portrays a young girl without the stock rebelliousness of know-it-all teenagers already bored with life.

In her acting debut, Lungu has a poise and clarity in her character that more than justifies the deference other adults give her in the task of making family decisions. She seems to have a wider field of vision than her elders, fulfilling an almost paternalistic role over parents and siblings. She also understands how nature and humanity are bound together and co-dependent, and sometimes competitive.

And to a beekeeper's daughter, that means accepting being stung, if you wish to feel the magic of harmonizing with insects.

A U.S. distributor has not yet been announced for "The Wonders." (C'mon, guys, get with it!) In Italian, German and French; Running time: 1:51.

UPDATE: "The Wonders" opens theatrically on October 30, 2015, beginning in New York City and expanding nationwide. Go to the official site for information and screening dates.

To watch a clip from "The Wonders" click on the video player below.

To watch an international trailer for "The Wonders" (in Italian), click on the video player below.