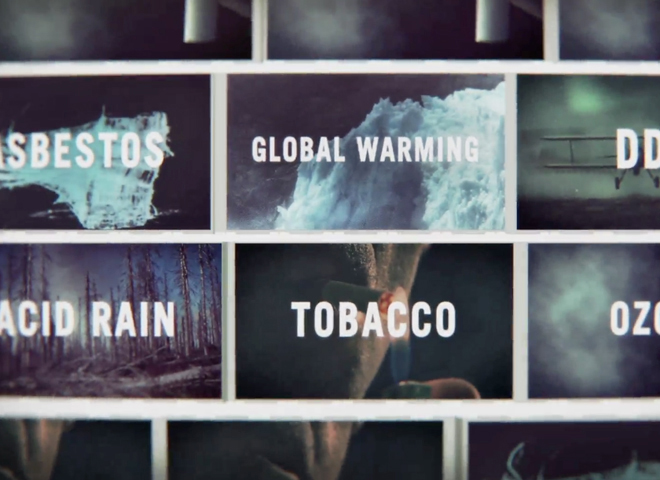 They appear incessantly on cable news and morning chat shows, and fill newspaper op-ed column inches with contrarian voices to the issues of the day, such as climate change. Where there is no debate they create one, sowing seeds of doubt through the cherry-picking of data or the wholesale creation of stories and characters. They lie, or dissemble to make it appear as if scientific fact is fallible, by leaning on a viewer's predilection to be attracted to the emotional over the rational.

These pundits may be disaffected Cold War scientists with axes to grind or ideologies to defend; or they may be skilled PR flacks out to make a buck.

And the source of many of these bucks? The coffers of interested corporations, funding the pundits' efforts through gauzy-named industry groups or think tanks.

The result: gridlock on some of the most pressing public health and safety issues and environmental concerns, from flame retardants in our kids' furniture, to second-hand smoke, to carbon pollution.

"Merchants of Doubt," a new documentary which had its U.S. premiere Wednesday at the New York Film Festival, is a film that will likely sow despair in anyone who would like to believe that truth always wins in the end, or that the rational sides of peoples' (or even Congressional members') brains -- when choosing between the facts that will protect us and the misinformation intended to protect special interest -- will go with the facts every time.

Sadly, they don't. And certainly not in a world with 24 hours of cable news airtime filled with gladiatorial battles of sound bites and screaming Cassandras.

Directed by Robert Kenner (the Oscar-nominated 2008 documentary, "Food, Inc."),"Merchants of Doubt" is inspired by the 2010 book of the same name by Naomi Oreskes and Erik M. Conway, which explored the plethora of media pundits consistently throwing sand in the gears of action on climate change. These pundits -- many with no scientific training or experience -- trumpeted the existence of scientific discord over climate change when there was none. They slandered climate scientists as socialists, and attacked them with death threats. They skewed the contents of leaked emails to suggest climate data number-crunchers were cooking the books. And even if they do bend to admit that climate change IS real (hard not to after Hurricanes Katrina and Sandy), they dig their heels in by denying a causal relation to human industrial activity, and scare the populace with dire warnings of lost jobs and government overreach. To them, reducing coal and oil = Big Brother.

The film points to the origins of this pundit class in the late 1950s, within the PR efforts of the tobacco companies, whose secret documents (revealed by whistleblowers or as evidence in lawsuits) detailed the playbook that a company peddling a hazardous product should follow to avoid financial ruin: cast doubt upon medical research (or even produce studies of your own); warn against the economic impacts in terms of job losses; rail against regulations as government overreach impinging upon people's liberties (it doesn't hurt to liberally throw the terms "Socialist" or "Communist" around); and make the culprit in any public health issue the consumer, as a matter of "personal responsibility."

With the tobacco industry's success in the 1960s at forestalling government regulations to ban smoking or to punish tobacco companies selling an addictive substance, other industries thought, hey, if it worked for them ...

And so trade groups and industry flacks began PR offenses to beat back changes in law. For flame retardants in furniture, a doctor testified before government committees about several babies he'd treated who'd been tragically burned in crib fires. The doctor later admitted to a reporter that he'd made it all up, but that (as a paid spokesperson for the chemical industry), he wanted to tell "emotional" stories that would convey the seriousness of the risks involved.

Fred Singer, of the Heartland institute (a libertarian think tank funded in part by Exxon), is a well-known climate change denier who for years has called scientific evidence of a warming planet a lie. He proudly displays the publications his group produces that mimic actual scientific publications but which are meant to confuse Congressmen.

Also interviewed is Marc Morano, a former producer for Rush Limbaugh and staffer for James Inhofe (a major climate change denier in the Senate), who specializes in spin. He proudly tells Kenner about his role in "creating chaos" through on-air debates with actual scientists; and he shows no remorse for the public attacks he launched against NOAA scientist James Hansen, who was among the first to warn of the dangers of CO2 pollution to irreversibly affect the Earth's climate. Morano laughs off having sent or encouraged threats of violence to Hansen, saying he's entertained by reading the threats he receives.

And when South Carolina Republican Bob Inglis, a staunch denier of climate change, had a change of heart after studying the data and effects in Antarctica, the Koch Brothers-backed Americans for Prosperity pulled out the stops, sending him to a Tea Party-enabled primary defeat. Inglis now appears on right-wing talk shows trying to convince deniers that the facts do not support them.

Kenner's filmmaking is fluid, frightening, and -- hopefully -- will wake up people to the hazards of punditry (or better yet, wake up the bookers of news shows).

Following an Academy Award-qualifying run in Los Angeles, later this year, "Merchants of Doubt" will be released by Sony Pictures Classics in March 2015. Running time: 1:36. The film has not yet been rated.

To watch a clip from "Merchants of Doubt," featuring science historian Naomi Oreskes, click on the video player below.