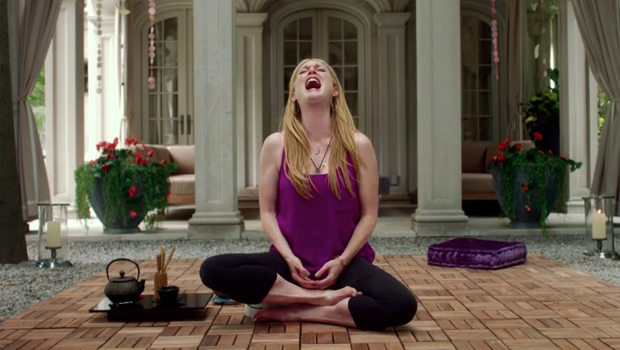 David Cronenberg has never shied away from the emotionally naked, the perverse, the profane. As the director of such films as "Naked Lunch," "Dead Ringers," "A Dangerous Method" and "A History of Violence" (not to mention the horror films "Scanners" and "The Brood"), he excels at making morbid or dangerous emotions vividly tactile. Not for nothing is one of the main characters of his latest film a burn victim; for Cronenberg, the flesh is not only subservient to one's will; it bears witness to our sins.

In his latest film, "Maps to the Stars" (which had its U.S premiere last night at the New York Film Festival), Cronenberg has directed his scathing eye towards strivers in the constellation of Hollywood -- actors and actresses who claw for jobs, self-help gurus who prey on the neuroses of the weak, and the countless covetous who circle celebrities with dreams of success of their own.

It's not merely a poison pen letter to the culture of L.A. -- it's a mail bomb.

Written by novelist Bruce Wagner (who himself charted the streets of Los Angeles and its wacked-out denizens as a limo driver, and tasted the corrupting fruit as a director and TV producer), "Maps to the Stars" follows several characters whose orbits conjoin and collide: Havana Segrand (Julianne Moore), an aging actress trying for an Oscar-bait comeback in a remake of her own late mother's greatest film; Benjie Weiss (Evan Bird) an egotistical teen actor reaping millions from his ridiculous kiddie comedy franchise; Dr. Stafford Weiss (John Cusack), a therapist and bestselling self-help author who hides a terrible secret of his own; and Agatha Weiss (Mia Wasikowska), a young woman who gets off the bus in L.A. with a wad of cash and a horrifying backstory (several, actually).

Not one of these people is stable.

Struggling to regain A-list status, Havana manipulates others, and does a happy dance when an untimely death improves her chances of getting the role of her dreams. But she also suffers nightmarish visions of the starlet that was her mother, who tragically died young -- and whose visitations give voice to her daughter's self-loathing.

Meanwhile, Benjie has visions of his own -- young children who died without being tainted by the misanthropic attitudes that Benjie petulantly expresses to just about any adult, most of whom have a financial interest in satisfying the kid actor's ego.

Stafford Weiss is Benjie's father, but seems emotionally incapable of sharing the very same lessons in self-actualization with his own son as he does with TV viewers.

Agatha's brief interactions with Jerome (Robert Pattinson), a limo driver and aspiring actor-writer, give some indication of her mental fragility. In addition to the noticeable scars on her neck and face, Agatha's gloves cover the evidence of a past crime that continues to tear at the fabric of her family. If she has even a faint glimmer of hope that she would receive forgiveness for what she had done, that is soon squelched with a fury that is startling and ugly.

The entire cast (including Olivia Williams as Benjie's stage mother) is to be praised, but the star of the show is Julianne Moore. Her character's quicksilver psyche is by turns brittle, self-assured, needy, spiteful, engaging and withdrawn -- all as she tries desperately to convince the powers-that-be to give her THE job.

And if that emotional fragmentation is (as the film may suggest) a consequence of growing up the child of a Hollywood star fated to follow in her glamorous footsteps, then she -- like most of the rest of the characters in "Maps to the Stars" -- is doomed.

This is one of Cronenberg's better films. Although attacks on Southern California naval-gazing and Hollywood back-stabbing aren't exactly new, and the misanthropy gets quite thick when all is said and done (without the moral balance of, say, "A History of Violence"), the fierceness of the characters' desires doesn't leave you. It is also funny in the most brutal of ways.

Distributed by Focus World, "Maps to the Stars" opens in Canada on Oct. 31, but it's unclear if a planned 2015 U.S. release will include an Oscar-qualifying run in L.A. before the end of this year. If not, it's safe to say that Moore -- winner of the Best Actress prize at this year's Cannes Film Festival for her performance -- will not be doing a happy dance.

To watch the trailer for "Maps to the Stars" click in the video player below.