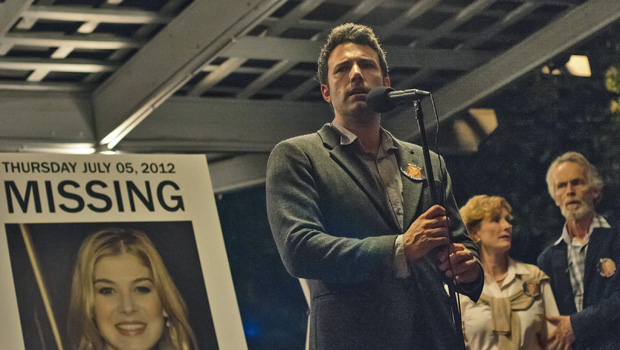 Gillian Flynn's bestselling 2012 novel, "Gone Girl," is as much fun for throttling the reader's expectations about the guilt of the prime suspect in a sensational missing persons case, as it is for surprising us with what the plot is actually about.

What the book did was paint a devastating portrait of a marriage rife with betrayal, deceit and psychic violence, built upon a tenuous foundation of vanity and spite. They are emotions that roil under the shiny surface of David Fincher's lean, darkly humorous dramatization of the book, with a sprightly screenplay adapted by Flynn herself.

Yes, Nick (played by Ben Affleck) and Amy (Rosamund Pike), whose five-year marriage has experienced passionate highs and economic pitfalls, did indeed love each other (in their own self-aggrandizing way), which made their marriage appear picture-perfect to the outside world. But the darkness that lay at the heart of their bond illustrates just how unknowable any couple's relationship truly is, even to their family and closest confidantes. Or how unknowable each person is to their partner.

The fun of the story in "Gone Girl," which begins as Nick returns home to find evidence of a break-in and his wife missing, is seeing how the outside world -- detectives, neighbors, the media -- is ready to project its own fears, hopes, hatred or forgiveness onto him. The grind of the police investigation, search parties and candlelight vigils gives way to attacks by cable TV stars upon Nick, his marriage, even his affability and eagerness to please.

Cutting back and forth with the desperate search for the missing Amy are flashbacks to scenes from her diary, recounting the joyous beginnings and later deterioration of their marriage. In these scenes Amy morphs from a winsome and loving spouse to a woman scared of her mate, whose trust has withered.

Beyond that lie spoilers, so that is as far as I can go.

The makers of the film version of "Gone Girl" have managed to pare down the book to its bare essentialities without sacrificing too many red herrings, while leaving the central facet of the narrative: the marriage of Nick and Amy, and how her disappearance upsets Nick's image of himself, and of her.

Affleck is the right actor for the role. His casual air only partly covers his discomfort in situations where he is not in control, and his flashes of temper put the lie to his claims of wanting to be polite and genial to others, thanks to his Midwestern upbringing. It's a character that must skirt the razor's edge of audience and public sympathy and rejection, and who chafes at being unable to control their perception.

Pike, who has starred in the action films "Die Another Day" and "Jack Reacher," the Jane Austen romance "Pride and Prejudice," and the sci-fi comedy "The World's End," is terrific at capturing her character's iciness, terror and duplicity.

Also excellent in the cast are Carrie Coon as Nick's twin sister, Margot, who may be the only person on the planet who trusts him; David Clennon and Lisa Banes as Amy's parents, who lead efforts to locate their daughter, and whose trust in their son-in-law drains away; Neil Patrick Harris as an old flame of Amy's who may hold a secret in her disappearance; Tyler Perry as Tanner Bolt, a high-priced attorney renowned for taking on unwinnable cases; and Kim Dickens as the police detective who would like to pin murder charges on Nick, but must find a body first.


Fincher's best works have toyed with perceptions held by both the characters and the audience about the moral strictures of each story's universe. He is expert at using lighting, production design and editing to cloak characters in shadow, or make even the most inviting of spaces seem claustrophobic and dangerous. His films emphasize ethical chasms that challenge viewers to accept a character's flaws and weaknesses, even as the plot veers towards their self-destruction.

In the case of the director's "The Social Network," the creator of the most popular website for connecting with others is seen as isolated and socially maladjusted. In Fincher's procedurals "Seven" and "Zodiac," the obsessions of those trying to solve crimes threaten to hinder their quests. And in "Fight Club," the narrator's POV becomes dangerously skewed by an intimidating, larger-than-life figure who helps reshape his self-image.


At a fast-paced 2.5 hours, "Gone Girl" manages to conjure smiles about the carefully-crafted dramatization of a carefully-crafted criminal plot, without leaving the audience feeling manipulated -- unlike the poor sods in the story, for whom cutting off a nose (or rending some other physical damage, particularly to someone else) to spite one's face is a no-brainer because, to them, ends always justify the means.

To watch a trailer for "Gone Girl" click on the video player below.