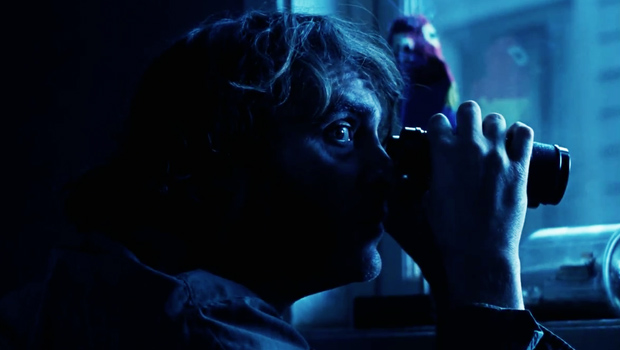 "Inherent Vice," based on Thomas Pynchon's trippy 2009 novel, is a shaggy dog sort of private eye film -- one in which the dog comes in out of the rain and shakes himself dry, drenching everything and everyone around him. It is cute, funny, and annoying.

Set in 1970 California, the story is centered on a hippie private detective, "Doc" Sportello (Joaquin Phoenix), who is sucked into a mystery involving the disappearance of a real estate developer, an Aryan Brotherhood motorcycle gang, a saxophonist-turned-undercover plant for the feds, Indonesian drug smugglers, a coked-up dentist, ill-tempered cops, kidnappers, a Ouija board, the FBI, and -- most dangerous of all -- an old flame, Shasta (Katherine Waterston), who wanders into Sportello's apartment in the community of Gordita Beach asking for a favor. Uh-oh.

The film had its world premiere Saturday as the centerpiece of the New York Film Festival. (It will open in limited release on December 12, and wide on January 9, 2015.)


Director Paul Thomas Anderson ("There Will Be Blood," "Boogie Nights," "The Master") is the first filmmaker to adapt a Pynchon novel, and he aims to preserve the looseness and freewheeling spirit of the book's characters and plot. The film shifts tone from serious to loopy, with some sudden bursts of violence and a friendly helping of '70s-era free love. The result is pleasantly chaotic, in a manner that is the antithesis of most films today that have been scripted and storyboarded in such great detail so as to leave no room for surprise or serendipity.

At a press conference for the film in New York City on Saturday, Anderson noted a reporter's question about whether the film version of the classic Raymond Chandler mystery "The Big Sleep" (so legendarily dense plot-wise that director Howard Hawks reportedly could not follow parts of it himself) was an inspiration, answering, "I saw 'The Big Sleep' and it made me realize that I couldn't follow any of it, and it didn't matter, 'cause I just wanted to see what was going to happen next anyway. So yeah, that was a good model to go on."

The film has an anything-goes creed similar to other notable film noirs, including the noir-est of L.A. mysteries, "Chinatown." The difference between "Inherent Vice" and "Chinatown," however, is that the latter's mystery hinges on major issues affecting society itself, whereas it is hard to pinpoint (apart from glancing mentions of Las Vegas and the feds) how the mystery of "Inherent Vice" -- once it is solved -- really matters. It is about character, and character alone.

The annoyances are slight but do get in the way by taking you out of the film's world, such as the sound effects that are sporadically and inexplicably cranked up to 11. Individual scenes work at creating the atmosphere of 1970s L.A., when the Establishment was in thrall to the threat of another Manson Family and marijuana smokers appear to have no shortage of that commodity. But some scenes may involve characters (like Martin Short's Dr. Blatnoyd, or Jordan Christian Hearn's Denis, who really doesn't know how to drive) who have no idea they are in a film noir; the audience is then jarred as much as the protagonist by their behavior.

At least the actors cannot be faulted for their colorful characterizations. Phoenix, one of the most intriguing actors working today, is always engaging, working hard to piece together all the disparate elements of the mystery while being ever-mindful not to fall prey to a stoner's paranoia. Sportello abides.

Also memorable are Josh Brolin as the cop "Bigfoot" Bjornsen; Owen Wilson as the musician, Coy; Reese Witherspoon as a deputy D.A.; Benecio Del Toro as Doc's lawyer; Hong Chau as Jade, a massage parlor receptionist; Eric Roberts as the disappearing tycoon; Sasha Pietrse as a recidivist runaway; and Joanna Newsom as Doc's gal-pal Sortilege, a voice of reason (and the film's narrator).

Released by Warner Brothers, "Inherent Vice" is Rated R for sex, violence, and a lot of drug use; plus, it's 1970, so people even smoke real cigarettes. Running time: 2:28.

To watch a trailer for "Inherent Vice" click on the video player below.