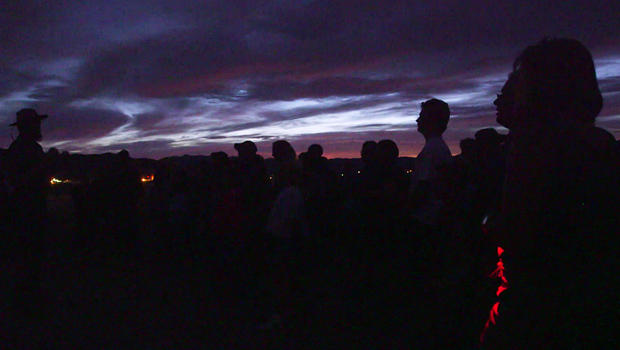 The lights on your Christmas tree may be beautiful, but they can’t hold a candle to nature’s starlight.  See for yourself as we go “On The Trail” with contributor Conor Knighton:

Great Basin National Park isn’t really on the way to anywhere. Head to this remote stretch of the Nevada desert, and you can easily spend a day wandering the pines by yourself.

But if you go home when the sun goes down, you’ll have missed one of Great Basin’s greatest attractions.

As they’re found of saying, “Half of this park is after dark.”

THIS is what Great Basin looks like at night.  The stars shine so brightly here, because this place is so unbelievably dark.

“We’re pretty rare. This is one of, if not the, darkest place in the lower 48,” said Annie Gilliland, part of a special team of stargazers at Great Basin.

“We are the ‘Dark Rangers,’ Yes, I do love telling people I am a Dark Ranger here!”

The “Dark Rangers” lead nighttime programs, setting up telescopes and showing off distant galaxies to people who may be seeing them for the very first time.

One Boy Scout told Knighton, “It makes me think our world is so small, and the galaxy out there is so big, our minds can’t even imagine it.”

Great Basin is less than 300 miles away from the Las Vegas Strip, the brightest spot on Earth when viewed from space. Protecting the skies out here has become a priority for the park.

“Having a dark night, very different from the daylight, matters to all the wildlife here,” said Gilliland. “The plants and trees as well, and human health.”

This year, after re-doing all of its lighting, the park was certified as one of just a handful of International Dark Sky Parks, and has been promoting itself as one of the last places to see what’s becoming an endangered natural resource.

During the summer, visitors can join a ranger on “Star Trains,” hopping into historic rail cars and heading out into the desert and see what the night sky would have looked like across most of America 100 years ago. Today, more than two-thirds of Americans can’t see the Milky Way from their backyards.

Alexis Wood came all the way out from St. Louis to peer through these telescopes.

“Light could, you know, just reach us from millions and millions of years away, that’s been traveling forever,” Wood said. “It’s just suddenly getting to me, this one individual person, on this planet, the backwater of the galaxy. And, yeah, this is kind of amazing.”

It’s hard not to have that reaction when you look up to the heavens. As a Wise Man (or two or three) once said, there are stars of wonder -- the stars of night.