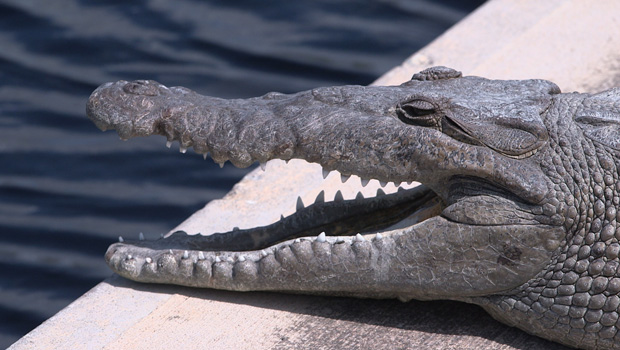 Our Conor Knighton is ON THE TRAIL again this morning, celebrating the centennial of the National Park Service with a visit to another one-of-a-kind park:

"You can't really understand it just by driving by, like you can if you're standing in it," said Ranger Alan Scott, who has been exploring the more than 1.5 million acres of South Florida's Everglades National Park for more than 20 years.

His "slough slogs," or "wet walks," deep into the cypress don't follow any set trail. And while HE sees the beauty in this swampy landscape, the Everglades wasn't protected for its scenery.

"It was the first national park that was set aside by the National Park Service, by the people of the United States, for what is ALIVE -- the plants, the animals and the habitats," he said.

The different species of plant and animal life found in the Everglades are staggering; with over a thousand species of seed-bearing plants, and more than 400 species of birds, the Everglades is an international biosphere reserve. Some species, like the endangered Florida panther, are hardly EVER seen. And some, like the lowly mosquito, can be all too common.

"If I slap one on my wrist, am I going to get a fine from the park service?" asked Knighton.

"Yes, you are! So give me a dollar every time you do that!" laughed Ranger Scott.

But you don't need to trek deep into the habitat to find the Everglades' most famous inhabitant. Just drive down one of the park roads, and you're bound to spot one.

The American Alligator can be found throughout the Everglades, in the water and on the trails. But keep an eye out, and you might also spot a CROCODILE -- and THAT combination is especially rare.

"They both find at least minimally conducive environmental temperatures and a habitat where they can find food," said biologist Mark Parry. "So it's kind of unique in that way. There's no place else in the world that crocodiles and alligators overlap."

The Everglades, with its mix of salt and fresh water, is just warm enough for crocodiles, just cold enough for alligators.

Both animals are technically "crocodilians" -- and the differences between the two can be subtle.

"The main difference most people notice between an alligator and a crocodile is the shape of its snout," Parry said. "So the crocodile has a much more A-shaped, pointy snout, and then the alligator has a broader, rounded snout.

"The other thing that people usually notice is the crocodiles are more of a gray color, and alligators are a black to dark green color."

But for Parry, there's no comparing them: "I'm a croc snob," he said. But he adds, "They're both awesome."

Thanks to conservation efforts in the park, the once-endangered American crocodile has been downgraded to threatened in Florida.

Back when the Everglades was established, in 1947, the idea of creating a park to protect plants and animals may have seemed revolutionary, but today, that habitat still has a lot to offer people.

"Here in Everglades National Park, you can go 50 miles from anybody, and be in true wilderness, alone," said Ranger Alan Scott. "And listen, and feel what it feels like to be in nature."


Also visited "On The Trail":