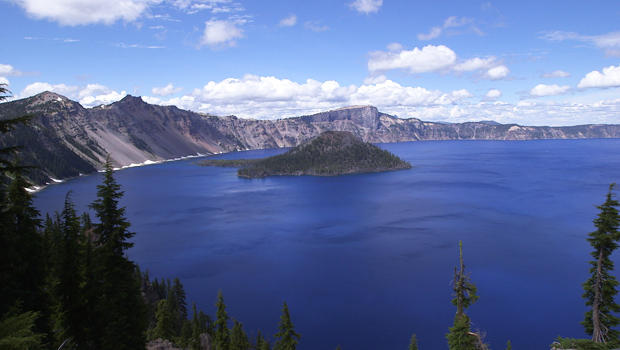 Conor Knighton ran into quite a mystery at his latest stop On the Trail:

Crater Lake is the deepest lake in the entire country. The pristine water in this collapsed volcano is so unbelievably blue it seems magical.

It cast such a spell on early visitors, they named the cone in the center Wizard Island. “It kind of evokes a little bit of mystery,” said Ranger Jennifer Evans.

Mystery is what brought Knighton to this National Park in Southern Oregon -- specifically, a mister-tree. I’d come to pay my respects to the Old Man of the Lake.

The Old Man of the Lake was first discovered in 1896 by Joseph Diller, a geologist and explorer who extensively studied Crater Lake at that time, said Mark Buktenica, an aquatic ecologist for the park. “He described him as ‘a spectacle, curious enough to excite the imagination.’”

And it has been doing that ever since: “The Old Man captures the hearts and imagination of visitors young and old.”

It may not look like much, but this part of a tree has been part of this park since its inception - a 30-foot long log, implausibly bobbing upright for 120 years -- never the “young man,” always the “old man.”

“He’s always been the Old Man of the Lake,” said Buktenica.

“That’s almost like he’s the Larry King of stumps,” Knighton laughed.  “He must’ve been young at some point. We just don’t know.”

As Bucktenica monitors the water quality of Crater Lake, he also ends up monitoring the movements of the Old Man. That’s right -- this seemingly-unsinkable tree gets around.

“You would think that the four-foot above the water would act as a little sail,” said Buktenica, “but sometimes he’ll move all the way across the lake against the wind.”

It’s as if he has a mind of his own. The Old Man can travel miles in a single day. Today, he’s close to the shore; tomorrow, he could be in the middle of the lake.

In the 1930s, the government commissioned a study of his movements.  In their “log of the log,” Rangers observed the Old Man move more than 60 miles in less than 3 months.

In the 1980s, Buktenica was part of a submarine exploration of Crater Lake.  To avoid running into the Old Man out in the water, they tied him up on the shore.  Bad idea!

“It wasn’t long after he was tied up that a storm blew in,” Bucktenica recalled, “and the surface of the lake got too rough for us to deploy and recover the submarine.”

When it started to snow in August, superstition got the best of the scientists. “Our senior scientists went out quietly one evening and released the Old Man from his bondage,” he said.

And wouldn’t you know it, the weather cleared up right afterwards!

As Jennifer Evans explains, it’s stories like that that have helped the Old Man take root in the imaginations of visitors. “It kind of became a bit of a celebrity, I guess, of Crater Lake,” she said.

And inquiring minds want to know: Why hasn’t the Old Man sunk?  Rocks may have once weighed down the roots, waterlogging the bottom while the sun dried out the top.

But Mark Buktenica isn’t as concerned with the why.

“I think, maybe some questions should remain unanswered,” he said. “That maybe it’s part of the human condition to believe in a little bit of mystery and the interconnectedness of all things.”

“So as a scientist, you’re okay with maybe not knowing?” Knighton asked.

“I’m okay with not knowing,” he stated.

As the Old Man bobs across the water, perhaps that’s what he’s trying to teach us with his travels. Sometimes, it’s fun … to be stumped.