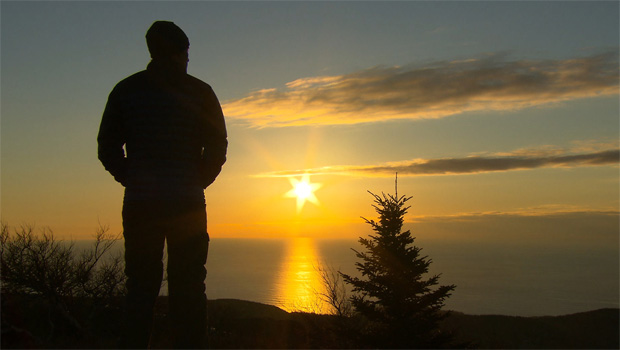 All this year we've asked our Conor Knighton to head out ON THE TRAIL. It's an appreciation of our National Parks in this, their Centennial Year. And to begin, he's at our easternmost National Park -- Acadia, near Bar Harbor, Maine:

It's the time of year when Acadia National Park, on the coast of Maine, goes into a bit of a hibernation. Bathrooms are locked up, popular roads close down, the lake freezes over, and the beaches of Mt. Desert Island are, well, deserted, save for a few brave locals.

"Are you surprised that more people don't come in the winter?"

In the summer, Acadia is packed. At just under 50,000 acres, it is one of our smallest national parks, but it's also one of the most popular. Last year, the park saw nearly three million visitors, and most show up between June and October.

According to Ranger John Kelly, who lives in nearby Bar Harbor, "about 75 percent of all our visits occur in that sort of short season."

In the off-season, the ice cream store is boarded up, most of the hotels close down, and the few restaurants that stay open cater to a mostly local crowd.

"In the winter, I think a lot of the locals feel a bit relieved to have a change in pace, and get to enjoy the park as more of their backyard," Kelly said.

A century ago, a group of residents banded together to gift some of their backyard to the federal government for protection, making Acadia the first national park created entirely from private land donations. Summer resident John D. Rockefeller Jr. gifted 10,000 acres to Acadia, and funded the construction of a network of car-less carriage roads.

During peak season, the road to Cadillac Mountain -- the highest point on the Eastern seaboard -- is typically packed full of cars and tour buses. But when the road closes, says Kelly, "depending on the day that you pick, you can have the top of the mountain to yourself."

Taking in a Cadillac sunrise is one of the iconic experiences of the park. But it's only during the colder months when the mountain top actually takes top billing. From early October to early March, it is the first place where the sun hits the eastern United States.

It's an early riser's dream -- a chance to catch the first rays of sun in the country before anyone else.

And while most days the long hike and the cold keeps visitors away, New Year's Day at Acadia has become a popular tradition.

Every year, on January 1st, a devoted crowd huddles at the mountaintop, just to get a sneak peak at the year ahead.

This year marks the 100th anniversary of the National Park Service. Which is why, on New Year's Day, Knighton decided to wake up at 3 a.m. and hike a snowy mountain in the dark.

All this year, he'll be heading out on the trail, traveling the country, telling some of the stories behind our national parks.

"I figured that this was the perfect way -- and the perfect DAY -- to get an early glimpse at what 2016 might have in store," Knighton said. "And from up here, it looks pretty spectacular."