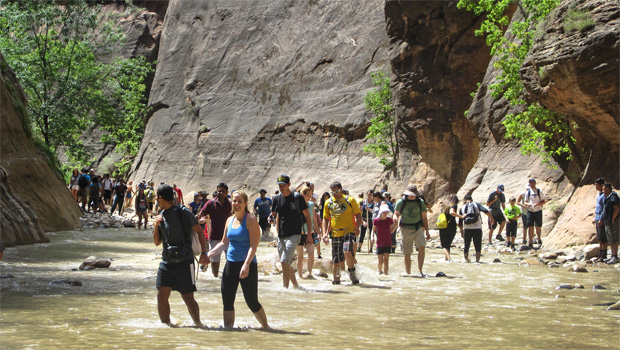 A summertime visit to a National Park is a tradition more than a century old. Conor Knighton takes the measure of park tourism ... then and now:

"Thousands of tired, nerve-shaken, over-civilized people are beginning to find out that going to the mountains is going home; that wilderness is a necessity."

John Muir published those words in his 1901 collection of essays, "Our National Parks." Since then, a few more people have found out about the parks. Not quite "thousands." More like 305 MILLION.

That's how many visitors showed up at all of the sites run by the National Park Service in 2015 -- a record-breaking year. And all signs point to this year being even MORE popular.

When asked whether he's excited about the coming summer or nervous, Jeff Bradybaugh, the superintendent of Zion National Park, laughed: "Well, we have 'nervous excitement.'"

Zion National Park has set park visitation records in four of the past five summers.

Photos from LAST summer show a scene not exactly what John Muir might have envisioned.

Zion is one of five national parks in Utah: The "Mighty 5." (The others are Arches, Bryce Canyon, Canyonlands and Capitol Reef.)

In 2013, the State of Utah launched a campaign to promote its National Parks. And boy, did it ever work:

Coupled with low gas prices, visitation has surged at all of Utah's parks. Jennifer Lamb, visiting from Oahu, said she came to Utah specifically to see the "Big Five."

The parks have become bucket-list destinations for tourists across the world. The sudden surge in visitation has left some of the parks scrambling to deal with crowd control.

Last Memorial Day weekend, the traffic actually got so bad at Arches National Park that they shut down the entrance for two hours.

During peak season, cars aren't even allowed in the most popular areas of Zion. In 2000, the Park introduced a shuttle bus system. But today, lines to get on the shuttle bus can be well over an hour long.

Has the shuttle system reached its capacity -- has it become TOO successful? "In a way it has," Bradybaugh said. "We have a seating capacity of 68 people. And often in the peak seasons, we're running loads of 100 people."

So what happens when a national park gets too popular? It's a question frequently debated at an office park on the outskirts of Denver.

Kerri Cahill is Branch Chief of the Park Service's Planning Division. She's currently working with Zion to develop a long-term plan for managing the crowds.

"Typically if you ask people overall did they have a good experience, they're largely going to say, 'Yes,' because they got to see the Grand Canyon or Yosemite or Yellowstone or these gorgeous, beautiful, iconic places," Cahill said. "But when you dig a little deeper, you might find out that there were things they experienced that could've been better."

Cahill is currently working with Zion to develop a long-term plan for managing the crowds.

With national parks, it's not just about cramming in as many people as possible; it's about making sure they're having the best possible park experience.

At this point, everything is on the table -- even the possibility of requiring permits or timed-entry reservations.

"In certain locations that might be a very effective and needed tool to ensure that people are having those great experiences, and that those resources are protected," Cahill said.

In the short term, Zion is doing its best to brace itself for the summer.

Preparations include some new porta-potties: "They are new for this year. We're going to measure the times those doors open and close, and each time they're pumped out, we'll have a volume measurement," Bradybaugh said.

"Yeah, yeah. That's one we like to contract out."

Arrive early enough, wander far enough, and it's still possible to escape the crowds. And if you end up having to wait a bit, well, there are worse places to be stuck in traffic.