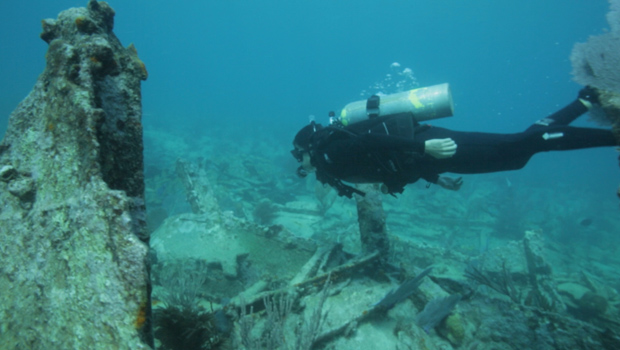 Conor Knighton's destination this week is Biscayne National Park, off the coast of Florid -- and this time he has very special company:

Dolphins are smart, and the ones greeting Knighton seem to know just what he's thinking -- popping up out of the water as if to say, "Hey! Just wait! There's MORE to this park than meets the eye!"

Ninety-five percent of Biscayne's 173,000 acres is covered with water; it's a park best explored by boat. But even then, the best scenery lies just beneath the surface.

Biscayne protects a stretch of the Florida Reef, just south of Miami. The reef, which is home to a staggering amount of aquatic life, is also a watery grave for more than a hundred shipwrecks.

Ranger Lawson is an archeologist and cultural resource manager at the park. He and his team work to preserve the shipwrecks and their stories.

"That history is all here; it's all out there in the water," he said. "And you can't see it unless you really get down in there and look."

That means getting into a wet suit, strapping on scuba gear, and taking a dive.

The park has designated six of the wrecks as part of an underwater maritime heritage trail. Signs on the ocean floor tell the stories of wrecks like the Lugano, a 350-foot cargo ship which sank back in 1913.

"At the time that it sank, it was the largest vessel that had ever come to grief on the Florida Reef Track," Lawson said.

The Florida Reef, next to a popular shipping lane, was famously difficult to navigate.

"Many ships had crashed into the reef known as Fowey Rocks," Lawson said. "So many that in 1878, construction of the Fowey Rocks Lighthouse was underway."

During construction, workers would sometimes spend the night on the lighthouse platform ... including the night the Arratoon Apcar approached. "They saw the lights of that steamer coming straight at them. They did everything they could to warn it off of the reef, but to no avail," Lawson said.

Bound for Cuba, the ship ground to a halt just 100 yards from the lighthouse, where it still sits today.

Lawson noted, "An unbuilt lighthouse is not nearly as effective as a completed one!"

Boating from site to site, you have to be careful; the reef still claims vessels. The Mandalay was a luxury yacht that sank in the early hours of 1966, in waters shallows enough to snorkel in. The passengers had been celebrating the arrival of the New Year.

Lawson said, "A shipwreck is a unique viewpoint into not even just one day, but a moment in time where a group of people who had everything they needed to survive at that point in history took all of that material and deposited it at one moment onto the sea floor."

While the wrecks contain evidence of their past lives, like the heels of shoes, today they're part of the reef, colonized by a NEW group of passengers who call them home.

Under the park's protection, this underwater museum preserves the story of the human history of South Florida.

Their motto? Take only pictures, leave only bubbles.