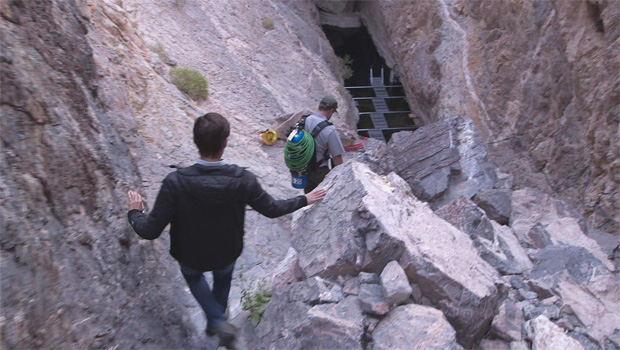 Devils Hole SOUNDS like a scary place. But it's really a sanctuary, as Conor Knighton shows us:

Death Valley is the largest National Park in the lower 48 United States. It protects more than 3.3 million acres along the California-Nevada border.

But look closely at a map, and you'll notice there are 40 ADDITIONAL acres -- 60 miles from everything else.

Far down a lonely gravel road, you'll come upon this "extra" piece of the park. They call it Devils Hole.

A trip to Devils Hole feels like you've discovered a supervillain's lair. It's in the middle of NOWHERE, surrounded by an imposing barbed wire fence.

There are security cameras and wind speed monitors -- all for a hole in the ground. If something seems a little fishy, well, that's because it is.

The Devil Hole Pupfish is one of the rarest fish in the world -- and this hole in the desert is the only place you can find it.

And this hole? "It's actually considered the smallest habitat known for a vertebrate species in the world. So it's about ten feet in width, and about 60 feet in length.

But thousands of years ago, this region was covered in water, and that's likely how the pupfish arrived at Devils Hole.

"We're STILL trying to figure it out," Wilson said. "It still has us asking questions and thinking of, you know, why and how? So it's a special place, and it gets me up in the morning and coming to work!"

This morning is especially exciting: It's "fish counting day." Twice a year, a group of divers spends a weekend heading into the hole to count.

The fish are in constant danger of extinction. "We actually reached an ultimate, all-time low of 35 observable fish in the spring of 2013," said Wilson.

While most of the fish can be counted from the surface, for the cave divers, it's a risky endeavor.

In the 1960s, two teenagers died while exploring Devils Hole. Their bodies were never recovered -- nobody actually knows how DEEP this hole goes.

"We know that divers have been down to 436 feet; they did not see a bottom," said Wilson.

Devils Hole is an aquifer. The 93-degree water here runs underneath this entire region, which pits farmers in search of water against environmentalists fighting for pupfish survival.

Years ago, when a private company drilled a well and turned it on, Wilson said, the water in Devils Hole started to decline -- and so did the pupfish population. Conservationists raised the alarm.

It was a landmark case that went all the way to the Supreme Court in 1976: The farmers vs. the fish. When the fish won, and the pumping was regulated, it led to a lot of resentment.

"There are people that are really anti-pupfish, because it does regulate water rights and development in the area," Wilson said. "And people have threatened and said, 'Let's just throw a couple bottles of bleach in here.' So we do have to be careful."

Hence, the barbed wire and the cameras. Not long after Knighton's visit, surveillance video captured three locals breaking in to skinny dip. Beer and vomit were found in the water. Fortunately, only one pupfish was killed.

It could have been a lot worse, which is why there's a SECOND Devils Hole.

Luke Oliver is part of a team of researchers raising the pupfish in captivity, in a building just a mile from their natural habitat.

"In case they go extinct in the wild, we've got our backup right here," Oliver said.

The facility, designed to replicate the conditions of Devils Hole, complete with algae, cost $4.5 million -- which may seem like a lot of money to save a tiny little fish.

But for Kevin Wilson, the pupfish are just as important as the bald eagle.

"They're a beautiful fish," he said. "They're very inquisitive. Whenever we enter the water to go diving, there are fish that will come up to us and swim in front of our masks. We can learn from this species."

In a region so inhospitable to life they named it DEATH VALLEY, these tiny fish are still managing to survive.