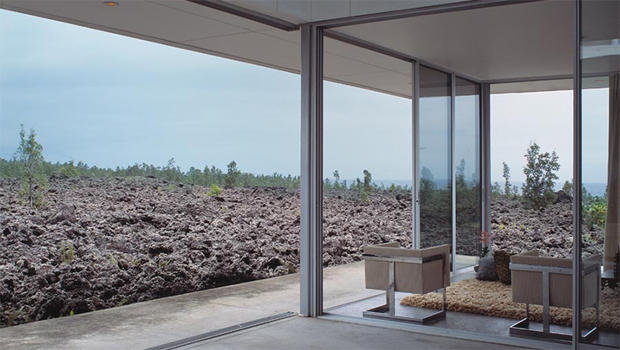 Conor Knighton’s tour through our National Parks has taken him to Hawai’i, where the heat is on:

At close to 2,000 degrees Fahrenheit, molten lava can be deadly.  But its orange glow is also a reminder of just how ALIVE our planet is.

Here on the Big Island of Hawai’i, the youngest island in our youngest state, new land is being formed every minute, as magma from far beneath the Earth’s surface bubbles up to crackle and cool.

“It’s so impressive to see the lava; it’s like nothing else. It makes you understand we live on this giant, burning cinder,” said Robert Trickey. “But we never think that. Living in New York, when you walk around New York, you don’t think, ‘There’s lava, like, way, way below me. But here, you remember that”

When Trickey looks out his windows, he gets a daily reminder of how lava built this island. He built his home here in 2000 -- a modern structure of glass and concrete that was designed across the Pacific by San Francisco architect Craig Steely.

It was the first in what has become a series for Steely: his “Lava Flow” homes.  While some would see this jagged, rocky landscape as a challenge, Steely saw it as an opportunity.

Knighton asked Steely, “The land is some of the newest land in the country. Is that exciting, to have a chance to build on that?”

“Yeah, it is exciting that way. And, I mean, also, it feels like I have a responsibility to do something right on it.”

Steely and his family spend part of the year in Lavaflow 2, a small, 1,400-square-foot home Steely designed for himself after falling in love with this area.

“What I enjoy most about architecture is building buildings that really complement and amplify and really connect with where they’re located,” Steely said.

In real estate, it’s all about location -- and when your location is near an active, erupting volcano, the land comes cheaply for a reason.

“So Kilauea volcano, Mauna Loa volcano are over a geologic hot spot,” said Jessica Ferracane, a ranger at Hawai’i Volcanoes National Park. “There’s a magma chamber that is coming up from the hot spot feeding the molten magma,”

Maunu Loa, the largest volcano on Earth, last erupted in 1984; Kilauea has been continuously erupting since 1983.

“We like to joke that we’re the only National Park that gets our land for free,” said Ferracane. “Kilauea has created more than 550 acres of new land since 1983, when Pu’u ‘Ō’ō started to erupt again out in the east rift zone.”

The east rift zone isn’t far from Trickey’s neighborhood. Lava was last here in 1955; it will almost certainly be here again.

“Do you think about what could happen in the future?” Knighton asked.

“Sure,” said Trickey. “And that’s an interesting question that people ask a lot: ‘Well, how could you live here knowing that it could come?’ You just make your peace with it. You just simply know that it’s part of life. I think in some ways, it makes you remember life is passing. It’s not permanent. You’re not permanently here!”

For those who live along the lava, it’s mindset … an appreciation for the land, and an ability to go with the flow.