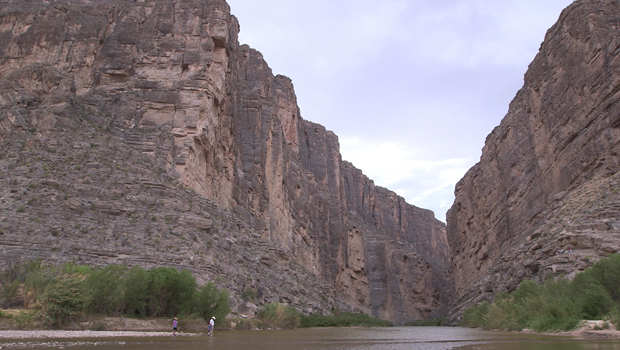 Conor Knighton is "On The Trail" again this morning, celebrating the centennial of the National Park Service at a spot right on our national border:

Every day, more than 80,000 people cross between El Paso, Texas and Juarez, Mexico.

But head close to 350 miles southeast, and the border has a bit of a different feel, where you can easily paddle across in a rowboat.

Fewer than 40 people a day cross between the United States and Boquillas del Carmen, Mexico. The all-time record is just 304, set during Spring Break -- more than the entire population of Boquillas.

For decades, tourists have been coming to shop, eat, and take a burro ride.

Boquillas is within shouting distance of a national park.

"The cross-cultural exchange down here has been part of Big Bend's history since before we became a park," said Ranger Jennette Jurado. "This land once was Mexico. So there were Mexicans that lived here."

Jurado is a Ranger at Big Bend National Park, which takes its name from the "Big Bend" of the Rio Grande, which -- for 118 miles -- twists and turns through a remote stretch of far West Texas.

The river marks the southern border of the park, and of the United States.

"With our scenery, especially the canyons, it's almost hard to remember that one-half of the canyon is the United States, and the other wall belongs to Mexico," said Jurado. "So we share these resources."

Mention "wall" and "Mexico" in the same sentence these days, and you're bound to get some strong opinions. But THESE 1,500-foot-high walls were built by nature, millions of years ago.

In 1935, Texas Senator Morris Shepard wrote to President Roosevelt, encouraging him to make this region a peace park, managed by both countries.

"As the legislation for the park was being written, part of the discussions were about having this bi-national or a 'friendly nations' park," said Jurado. "But it's just never come to fruition to have that formal agreement."

But informally, the park has always had ties to the Mexican side. The dividing line is shallow enough you can walk across it.

Boquillas gets a lot of first-time visitors. "We've had a lot of people that have come to Mexico for the first time, and what they really like is that we have a very safe town here," said Lilia Falcon, who was born in Boquillas. Today, she works at the restaurant her parents started back in the 1970s -- one of just TWO restaurants in town.

"We don't serve, like, steaks and all that, because we still have to go 160 miles away to go get our groceries," Falcon said.

The traditional food they do serve is delicious. But for over a decade there were no tourists to feed.

September 11 affected how many people were coming to Boquillas. "It completely changed our lives," said Falcon, "because in 2002 we got the border closed here for 11 years."

Up until 2002, Boquillas was considered an informal crossing point; enforcement wasn't really a priority. But increased security after 9/11 meant that remote crossings like Boquillas were shut down.

"Because a lot of the economy down there was tourism-based, most of those families had to move away," said Ranger Jurado, "because there wasn't a way for them to legally support themselves anymore."

It was devastating for the town. The bar was the only business that stayed open.

But in 2013, the government opened an OFFICIAL port of entry in the park. Next week marks its three-year anniversary.

The gates are only open from 9-6 p.m., five days a week, and the building is staffed with park rangers. To enter back into the U.S., you chat with a border patrol agent through a video kiosk.

It's a high-tech experience at the end of a decidedly low-tech day, back home just in time to watch the sun set over ANOTHER country.

"When you draw those arbitrary, political lines," said Ranger Jurado, "it becomes a little bit more apparent how much the landscape is just one down here."