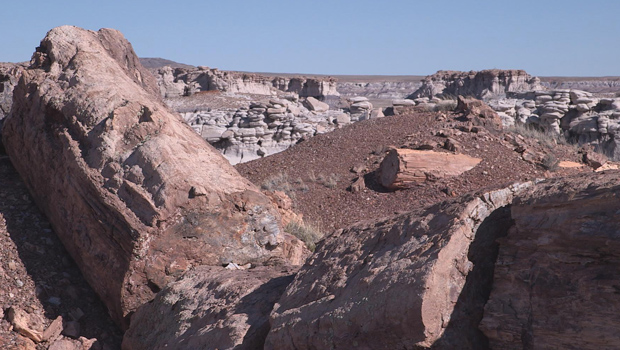 When it comes to his love for our National Parks, our Conor Knighton makes no apologies. Not so for some of the visitors who preceded him to his latest stop:

Matt Smith is the museum curator at Petrified Forest National Park in Arizona. His archives are full of an impressive collection of ancient fossils, but he also looks after a small batch of letters.

"To park ranger, I am so, so sorry for taeking the petrified wood. I didn't know it was so speshall."

The letters are apology notes -- tales of remorse written by reformed criminals.

At Petrified Forest, the petrified wood is everywhere. It lines the trails and tops the hillsides.

"This place was set aside because this is, by far, one of the largest accumulations you'll ever see, and possibly the largest in the world," said paleontologist Bill Parker.

Two hundred and twenty-five million years ago, this dry stretch of Northeast Arizona was lush and green, home to some of the early dinosaurs. The trees that stood tall back then were buried in sediment, and fossilized. Frozen in time, today that wood is beautiful. And so, as Parker explains, rangers occasionally see visitors trying to smuggle a piece home as a souvenir.

"People tend to have a guilty conscience, right?" he said. "There's tell-tale signs of that."

There are signs that attempt to deter would-be wood burglars. It's a crime to take anything out of the park. But, not surprisingly, people still do. What IS surprising is that some the wood has come back.

The letters that accompany the heavy packages speak of a long-ago theft that's weighed heavily on the conscience.

One letter included a poem:

"If you take the petrified wood,
Beware the consequences, you should.
Though enshrined on a shelf,
Still brought him ill health,
Some things are plain no good."

"Some people ascribe a curse to the wood," said Smith. "I don't know how much I buy that. Because if you're the kind of person who would take something from a national park, maybe you just have poor judgment skills, I don't know!"

The park used to play up "the curse" -- they put all the letters on display -- which just led to MORE letters.

"We may have just been encouraging people unwittingly to do the wrong thing by emphasizing it, you know? Overemphasizing it," said Smith. "Saying, you know, 'Bluefin tuna are going extinct, so you better eat some sushi,' or something like that."

Rangers once claimed they were losing a ton of wood a month, until they asked around and realized nobody really knew where that number came from. Could it be the problem wasn't actually all that bad?

Ranger Bill Parker said about 10 years ago, someone had an idea: "We had all this photography of the wood. We went out, found the exact angles they were shot at, and re-shot 'em. And we were absolutely amazed to see that everything was still the same!"

So Petrified Forest National Park recently changed its messaging, thanking visitors for "doing the right thing," because most of them do. Unfortunately, for the few who do so BELATEDLY, the wood that's sent back to the park can't actually go back IN the park.

"We can't put it back," said Smith. "Because somebody who's going out to study that stuff could inadvertently pick up something that has no reason to be there, and botch their results."

So, it ends up at what the Rangers call the "conscience pile." Tucked away down a service road, the pile contains years of returned wood which, honestly, makes writing a letter and spending a bunch of money on postage to send that wood BACK all seem a little pointless.

But guilt is a trip.

"In every case, it's because somebody valued their experience here, and valued the thing that they're mailing back," said Matt Smith. "That's how much they're willing to give back in order to do the right thing, because they feel like this is a special place."