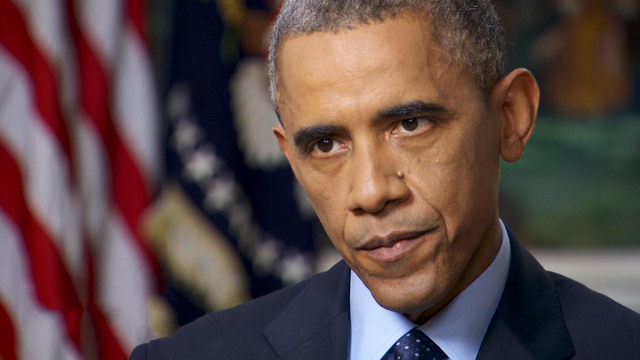 President Obama, in an interview with "60 Minutes" correspondent Steve Kroft, admitted the U.S. underestimated the rise of ISIS and at the same time overestimated the ability of the U.S.-trained Iraqi Army to counter the fundamentalist group. The wide-ranging interview also covered other foreign policy trouble spots, such as U.S. - Russian relations, and matters closer to home like the economy and the upcoming mid-term elections.

CBS News correspondent Holly Williams reports from the front lines against ISIS in Syria that Commander Hussein, a strapping former tailor who never stops smiling and pairs his military fatigues with a flower-patterned headscarf, has just 40 soldiers to hold off ISIS. Ten of his fighters are women, some of them teenagers. According to Hussein, they're some of his best soldiers. One of them is 19-year-old Akina Akin, a five-foot tall dynamo who's already battle-hardened after two years of fighting.

Deputy National Security Adviser Tony Blinken said on CBS News' "Face the Nation" that Mr. Obama's preference for building an international coalition to combat ISIS enables the U.S. to avoid "the al Qaeda trap of putting tens of thousands of Americans on the ground to be bogged down and bled."

In the wake of last week's historic White House security breach, there are new details about a 2011 incident in which a gunman shot several bullets at the building. At least one of the Obama children was in the White House at the time. Michelle Obama learned of the incident not from the Secret Service, but from a White House usher. According to CBS News correspondent Julianna Goldman, the president and first lady were fuming. Members of Congress have taken note as well, and will question the Secret Service director on Tuesday.

Air traffic controllers say the damage to the control center outside Chicago is unlike anything they have seen before. Critical communications equipment to manage planes in the skies will have to be replaced. CBS New correspondent Jeff Pegues reports the FAA said Sunday evening that it would take until Oct. 13 - more than two weeks - to get the facility up and running at full capacity.

The enthusiasm gap shows 45 percent of Republicans say they're more eager this year, while 33 percent of Democrats describe themselves as such. Maybe the most important political reality right now: Democrats probably have to either match Republicans' excitement, or find a way to turn out their base despite a lack of it, if they're to keep the Senate.

It began as a simple waterproof camera GoPro CEO Nick Woodman developed to video himself surfing. Since then, it has been transformed into a multibillion dollar juggernaut. CBS News correspondent Carter Evans reports the company boasts a huge market share: Roughly half of all video cameras sold in the U.S. are GoPros.

By now you've probably heard of Alibaba, the Chinese Internet giant that's able to reach millions upon millions of previously unreachable Chinese consumers. The company went public this month on the New York Stock Exchange and became one of the most valuable in the world. And Alibaba is just getting started. CBS News "60 Minutes" correspondent Lara Logan spoke with Alibaba's chairman, Jack Ma, who took $50,000 in seed money and created a company valued at $231 billion.

CBS News "Face the Nation" anchor Bob Schieffer says departing New York Yankee Derek Jeter's performance on the field and off the field was a good role model for other athletes.

Many schools struggle to fit physical education into a busy curriculum, even though parents and educators are well aware that children thrive when they're given ample time to run around every day. Now, a study suggests that regular exercise doesn't just help children stay physically healthy -- it can also improve their academic performance.

Teaching teens to handle money is a part of their education that is mostly conveyed at home. MoneyWatch contributor Ray Martin suggests when making a list of back to school items, families should agree on two simple ground rules: All items on the list must be purchased and, if a teen wants something that's not on the list, he or she shouldn't use the money his or her parents gave her to buy it. As an additional incentive to save money, Martin suggests they strike this deal: Agree that teen will look for sales and coupons. If he or she buys all the items on the list, some or all of the money leftover is theirs to keep.

Sunday is the most popular TV night of the week, and has been for most of the past 25 years. Last season, on average, 122 million viewers -- a third of the country -- tuned in on Sunday. CBS News correspondent Tracy Smith reports for "Sunday Morning" that the truth is, Sunday's long been a "good evening" for television. By the time "Alfred Hitchcock Presents" debuted on Sunday nights in 1955, Ed Sullivan's variety show was already seven years into a two-decade ride.

John Boehner "happy" to have Congress vote on anti-ISIS mission

Who will replace Eric Holder as attorney general?

At least a dozen arrested in Ferguson

How to be more productive without coffee