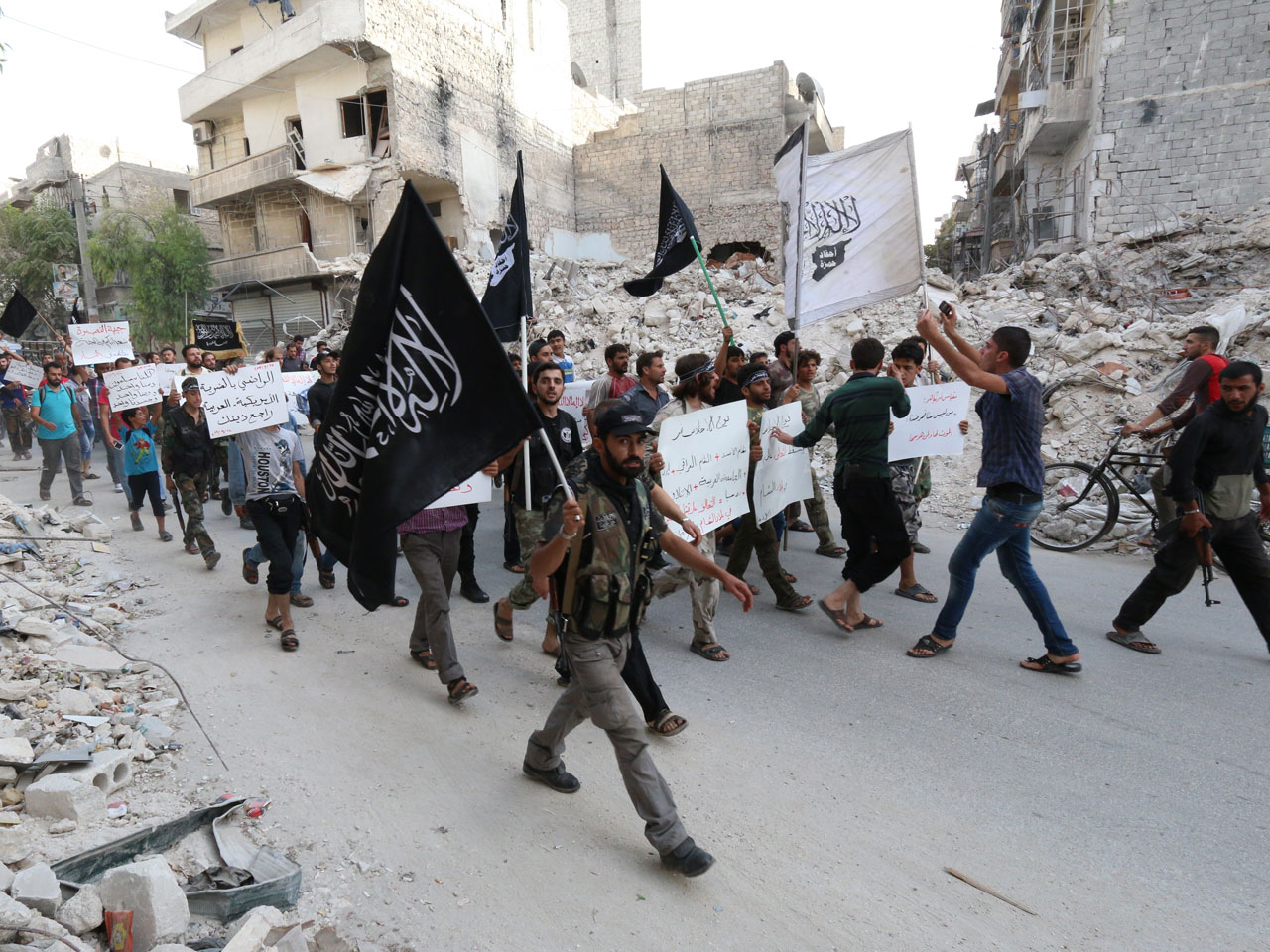 BEIRUT - The leader of al Qaeda's Syria affiliate vowed Sunday that his group would "use all possible means" to fight back against airstrikes by the U.S.-led coalition and warned that the conflict would reach Western countries joining the alliance.

The U.S. views the affiliate, known as the Nusra Front, as a terrorist group, but Syrian rebels have long seen it as a potent ally against both the Islamic State of Iraq and Syria -- which is the main target of the coalition -- and Syrian President Bashar Assad's forces.

Syrian rebels, activists and analysts have warned that targeting the Nusra Front will inject more chaos into the Syrian conflict and indirectly help Assad by striking one of his main adversaries. The U.S. insists it wants Assad to step down, but is not targeting his forces, which are best placed to benefit from the airstrikes.

In a 25-minute audio recording, Nusra Front leader Abu Mohammed al-Golani portrayed the U.S.-led coalition as a "Crusader alliance" against Sunni Muslims and vowed to fight back.

"We will use all that we have to defend the people of Syria...from the Crusader alliance," al-Golani said. "And we will use all possible means to achieve this end," he said, without offering more details.

He went on to warn Western countries against taking part in the alliance in words that echoed those of the late founder of al Qaeda, Osama bin Laden.

"This is what will cause the battle to be transported to the hearts of your own homes; because Muslims will not stand idly by and watch Muslims be bombed and killed in their countries, while you are safe on your countries. The price of war will not be paid by your leaders alone. You will pay the biggest price," he said.

The recording appeared genuine and corresponded with Associated Press reporting.

Deputy National Security Adviser Tony Blinken said Sunday on "Face the Nation" that President Obama's preference for building an international coalition to combat ISIS and other extremists allows the U.S. to avoid "the al Qaeda trap of putting tens of thousands of Americans on the ground to be bogged down and bled."

"We've been very clear that there will not be U.S. ground invasion of Iraq or Syria. This has to be local forces stepping up and fighting for their own country," Blinken said. "We're not going to repeat what we did before, hundreds of thousands of Americans on the ground in the Middle East, getting bogged down. That's exactly what al Qaeda wants. That's what we're not going to do."

In an interview airing Sunday night on "60 Minutes, " President Obama said Syria has become "ground zero for jihadists around the world."

The United States and five Arab allies launched an air campaign against Islamic State of Iraq and Syria (ISIS) fighters in Syria on Tuesday with the aim of ultimately crushing the extremist group, which has created a proto-state spanning the Syria-Iraq border. The U.S. has been carrying out airstrikes against the group in neighboring Iraq since August.

Some of the initial strikes targeted the Nusra Front, hitting several of its facilities and killing dozens of its fighters. Washington said it was trying to take out an al Qaeda cell known as the Khorasan group that was actively plotting attacks against Americans and Western interests.

Syrian rebels have expressed anger at the coalition airstrikes, both because they have targeted the Nusra Front -- which they see as an ally -- and because they are not hitting pro-government forces, which are the best placed to benefit from any rolling back of ISIS. The Nusra Front's ultimate goal is to impose Islamic law in Syria. But unlike ISIS, it has fought alongside other rebel groups, seeing the overthrow of Assad as its first priority.

Al-Golani warned the airstrikes would weaken the rebels.

"Those of our men who were targeted in the shelling... the effect of their loss will be witnessed by the entire conflict, not just on the (Nusra) Front alone."

The Nusra Front leader also warned other rebel groups not to coordinate with the U.S.-led alliance. Washington has promised to arm and train more Syrian rebels to help fight ISIS.

The al-Golani speech came hours after the group's spokesman warned that Muslims would attack countries taking part in the coalition air raids.

ISIS -- an al Qaeda breakaway faction rejected by the global terror network -- controls a vast tract of land stretching from the Turkish border in northern Syria to the western outskirts of Baghdad, where it has declared a self-styled caliphate ruled by its brutal version of Islamic law. Its aggressive push across Iraq over the summer spurred the U.S. to form a coalition against the group.

On Sunday, explosions lit the sky for two hours in the northern Syrian town of Tel Abyad as airstrikes, likely by the coalition, targeted a refinery operated by the militant group, said an eyewitness and activists.

"Our building was shaking and we saw fire, some 65 yards high, coming from the refinery," said Turkish businessman Mehmet Ozer, who lives in the nearby Turkish border town of Akcakale.

The Turkish news agency Dogan said the strikes targeted an oil refinery and the local headquarters of the Islamic State group. U.S. Central Command, which is overseeing the air campaign, did not immediately comment on the strikes.

The U.S.-led coalition has been targeting ISIS-held oil installations across Syria, aiming to cripple the group's finances. The group is believed to earn some $3 million a day from selling smuggled oil on the black market as well as kidnapping and extortion.

The Britain-based Syrian Observatory for Human Rights says at least 19 civilians have been killed so far in coalition strikes in Syria. Most recently, six oil workers in the far northeast province of Hassakeh were killed overnight, said the Observatory, which obtains information from a network of activists on the ground.

Overall, some 190,000 people have been killed in Syria's three-year conflict, and nearly one-half of the country's pre-war population of 23 million people has been displaced.