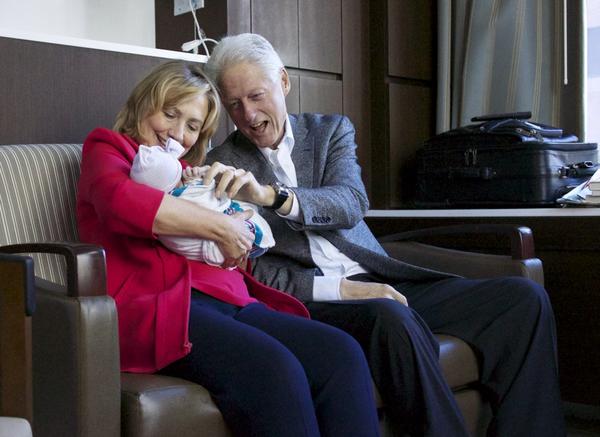 Everything Hillary Clinton does these days is scrutinized for signs of political import, so why should becoming a grandmother be any different?

After Clinton's daughter Chelsea gave birth to a healthy baby girl on Friday, the political world spent little time cooing over photos of the baby before getting down to what's really important: How will the new granddaughter affect Hillary Clinton's decision on a 2016 presidential bid?

Some predict Clinton will feel she owes it to her granddaughter to try to make history as the first female president.

"She does not want to be explaining to 10-year-old Charlotte that grandma could have been president but decided to stay home and change diapers," Marcus added. "I don't think so. She's running."

Others have said Clinton might not want to spend time navigating the swamp of Washington, D.C., when she could enjoy a quieter life with her family.

Marcus' colleague at the Washington Post, Kathleen Parker, wrote in April: "It is not crazy to wonder whether Hillary Clinton...might pause and think: Do I want to suffer through another campaign and then bear the burdens of the world at this point in my life? Or do I want to enjoy this new little life and work through the family foundation on my own schedule?"

For some, the suggestion that Hillary Clinton must choose between being a grandmother and being president is itself sexist. After all, plenty of grandfathers have run for president, and nobody saw fit to ask them whether they could balance their family life with their political ambition.

"There's a disproportionate attention to [Clinton] being a grandmother," Debbie Walsh, who directs the Center for American Women and Politics at Rutgers University, told MSNBC in April. "Certainly, many men have run for president as grandfathers. And nobody worries if they can't do their job."

"It is true we would never consider asking a man those questions," acknowledged Parker. "But it is also true that women and men are different...when it comes to babies. Women don't love their children or grandchildren more than men do, but their roles are significantly different."

And even former President Bill Clinton has suggested his wife would rather be a grandma than president.

"If you ask her, I think she'd say grandmother, but I have found it best not to discuss that issue," Clinton told CBS News' Charlie Rose in March.

Hillary Clinton herself has acknowledged she feels torn between family and public service.

"I know I have a decision to make," she told People Magazine in June. "But part of what I've been thinking about, is everything I'm interested in and everything I enjoy doing -- and with the extra added joy of 'I'm about to become a grandmother.' I want to live in the moment. At the same time I am concerned about what I see happening in the country and in the world."

Parker predicted that, despite any reservations, Clinton would decide to take the plunge.

"I would submit that Chelsea's baby gives Hillary Clinton all the more reason to run for president," she wrote. "She not only will want to help shape a world in which women lead nations but also one in which babies and grandmotherhood are celebrated as integral to women's lives -- not Photoshopped out as inconvenient obstacles to women's advancement."

Ultimately, Clinton may not have to make a choice at all: she may decide to have her cake and eat it too.

"You can be president and still change diapers," quipped Marcus.

"In fact, they do it all the time," added the New York Times' Peter Baker. "It's called Congress."