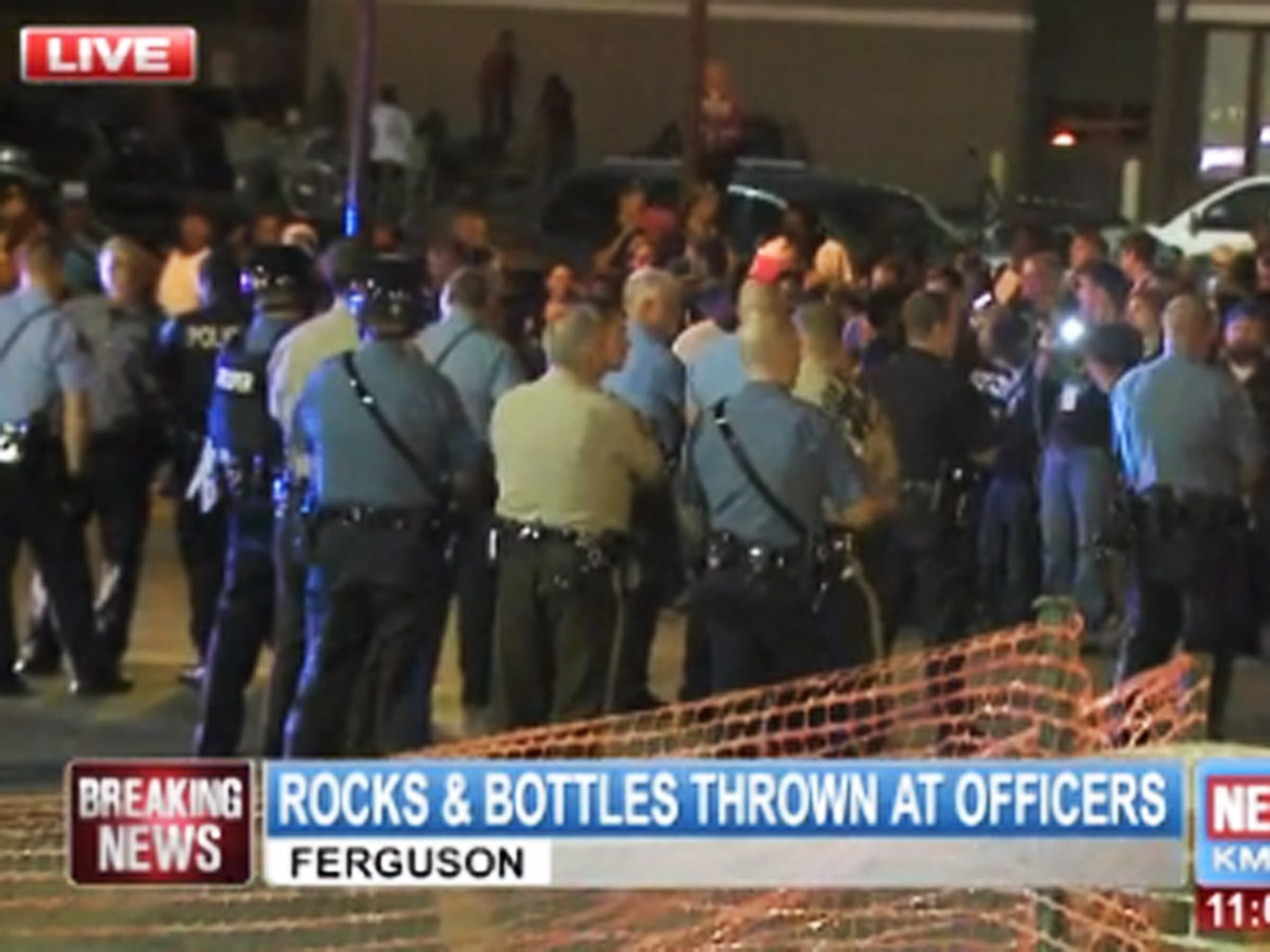 At least a dozen people were arrested Sunday night in Ferguson, Missouri as a large crowd gathered in front of the city's police headquarters, St. Louis County Police report.

Officers said bottles and rocks were thrown at Ferguson officers.

According to CBS St. Louis affiliate KMOV-TV, police said many of the arrests were on allegations of either not following orders from police or agitating the crowd.

Separately, authorities searched Sunday for a suspect in the shooting of a police officer in Ferguson, the St. Louis suburb where there have been angry protests since a white officer fatally shot an unarmed 18-year-old black man last month.

Although there were two protests about the Aug. 9 shooting of Michael Brown happening when the officer was shot Saturday night, St. Louis County Police Chief Jon Belmar said at a news conference early Sunday he didn't think they were related to the wounding of the officer.

St. Louis County Police Sgt. Brian Schellman, a police spokesman, said in an email that only one suspect was involved in the shooting, not two as earlier reported.

The suspect was standing outside a closed community center when the officer approached Saturday night. The suspect fled and the officer gave chase. That's when the man turned and shot him in the arm, police said.

Belmar said the officer returned fire, but that police have no indication that anyone else was shot.

The officer was treated and released from a hospital, Schellman said.

Schellman said he didn't know why the body camera the wounded officer was wearing was turned off during the shooting.

The shooting comes amid simmering tension between community members and police in Ferguson, where two-thirds of the residents are black, but only three of the city's 53 police officers are African-American. The shooting of Brown and police response to the protests stoked a national discourse about police tactics and race.

On Saturday, Brown's parents told The Associated Press they were unmoved by a videotaped apology released days earlier by Ferguson Police Chief Tom Jackson, whose attempt to march with protesters Thursday night sparked a clash that led to several arrests.

When asked whether Jackson should be fired, Brown's mother, Lesley McSpadden, said he should be. Brown's father, Michael Brown Sr., said rather than an apology, they would like Darren Wilson, the officer who shot their son, to be arrested.

A county grand jury is weighing whether to indict Wilson in Brown's shooting.

The Justice Department, which is investigating whether Brown's civil rights were violated, is conducting a broader probe into the Ferguson police department. On Friday, it urged Jackson to ban his officers from wearing bracelets supporting Wilson while on duty and from covering up their name plates with black tape. The bracelets, which sparked complaints from Ferguson residents, are black with "I am Darren Wilson" in white lettering.