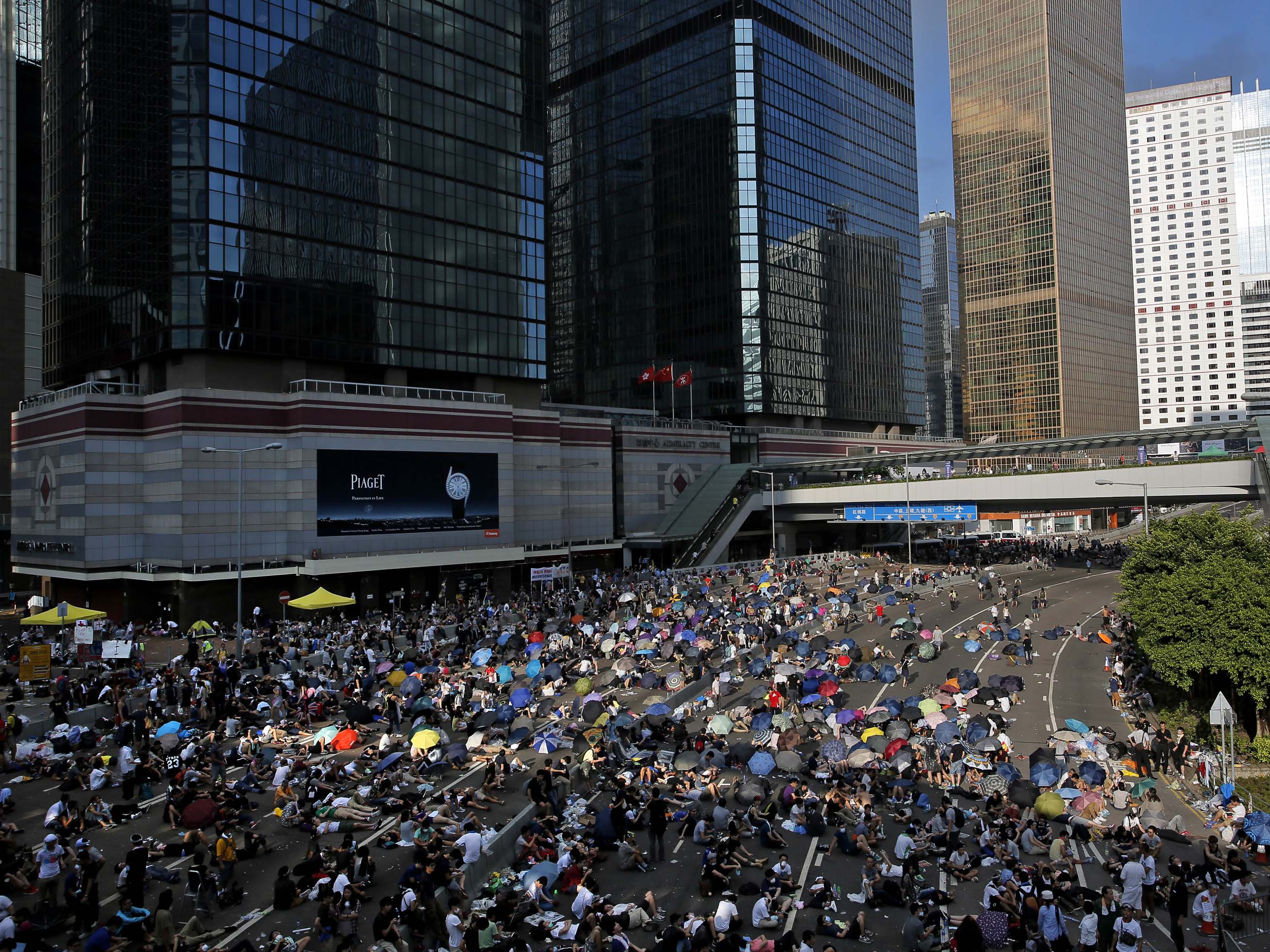 And with rumors swirling, Hong Kong's Chief Executive Leung Chun-ying reassured the public that speculation that the Chinese army might intervene was untrue.

"I hope the public will keep calm. Don't be misled by the rumors. Police will strive to maintain social order, including ensuring smooth traffic and ensuring the public safety," said the Beijing-backed Leung, who is deeply unpopular. He added, "When they carry out their duties, they will use their maximum discretion."

The city's transport department said that besides road closures in areas such as Causeway Bay, Wan Chai and Admiralty - where the protests have been focused - main roads have also been blocked by demonstrators in Mong Kok.

More than 200 bus routes have been canceled or diverted in a city dependent on public transport. Subway exits have also been closed or blocked near protest areas.

The mass protest, which has gathered support from high school students to seniors, is the strongest challenge yet to Beijing's decision to limit democratic reforms for the semi-autonomous city.

The scenes of billowing tear gas and riot police outfitted with long-barreled weapons, rare for this affluent Asian financial hub, are highlighting the authorities' inability to assuage public discontent over Beijing's rejection last month of open nominations for candidates under proposed guidelines for the first-ever elections for Hong Kong's leader, promised for 2017.

Authorities said some schools in areas near the main protest site would be closed, as Leung urged people to go home, obey the law and avoid causing trouble.

"We don't want Hong Kong to be messy," Leung said as he read a statement that was broadcast early Monday.

That came hours after police lobbed canisters of tear gas into the crowd on Sunday evening. The searing fumes sent demonstrators fleeing, though many came right back to continue their protest. The government said 26 people were taken to hospitals.

The protests began with sit-ins over a week earlier by students urging Beijing to grant genuine democratic reforms to this former British colony.

"This is a long fight. I hope the blockade will continue tomorrow, so the whole thing will be meaningful," said 19-year-old Edward Yau, 19, a business and law student. "The government has to understand that we have the ability to undo it if they continue to treat us like we are terrorists."

When China took control of Hong Kong from the British in 1997, it agreed to a policy of "one country, two systems" that allowed the city a high degree of control over its own affairs and kept in place liberties unseen on the mainland. It also promised the city's leader would eventually be chosen through "universal suffrage."

Hong Kong's residents have long felt their city stood apart from mainland China thanks to those civil liberties and separate legal and financial systems.

Beijing's insistence on using a committee to screen candidates on the basis of their patriotism to China - similar to the one that currently hand-picks Hong Kong's leaders - has stoked fears among pro-democracy groups that Hong Kong will never get genuine democracy.

University students began their class boycotts over a week ago and say they will continue them until officials meet their demands for reforming the local legislature and withdrawing the proposal to screen election candidates.

Students and activists have been camped out since late Friday on streets outside the government complex. Sunday's clashes arose when police sought to block thousands of people from entering the protest zone. Protesters spilled onto a busy highway, bringing traffic to a standstill.

In a statement issued after midnight, the Hong Kong police said rumors that they had used rubber bullets to try to disperse protesters were "totally untrue."

Thousands of people breached a police cordon Sunday as they tried to join the sit-in, spilling out onto a busy highway and bringing traffic to a standstill.

Occupy Central issued a statement Monday calling on Leung to resign and saying his "non-response to the people's demands has driven Hong Kong into a crisis of disorder."

The statement added that the protest was now "a spontaneous movement" of all Hong Kong people.

Police said they had arrested 78 people. They also took away several pro-democracy legislators who were among the demonstrators, but later released them.

A police statement said the officers "have exercised restraint and performed their duties in a highly professional manner." It urged the public to not occupy roads so that emergency vehicles can get through.

Among the dozens arrested was 17-year-old Joshua Wong, who was dragged away soon after he led a group of students storming the government complex. He was released Sunday evening.