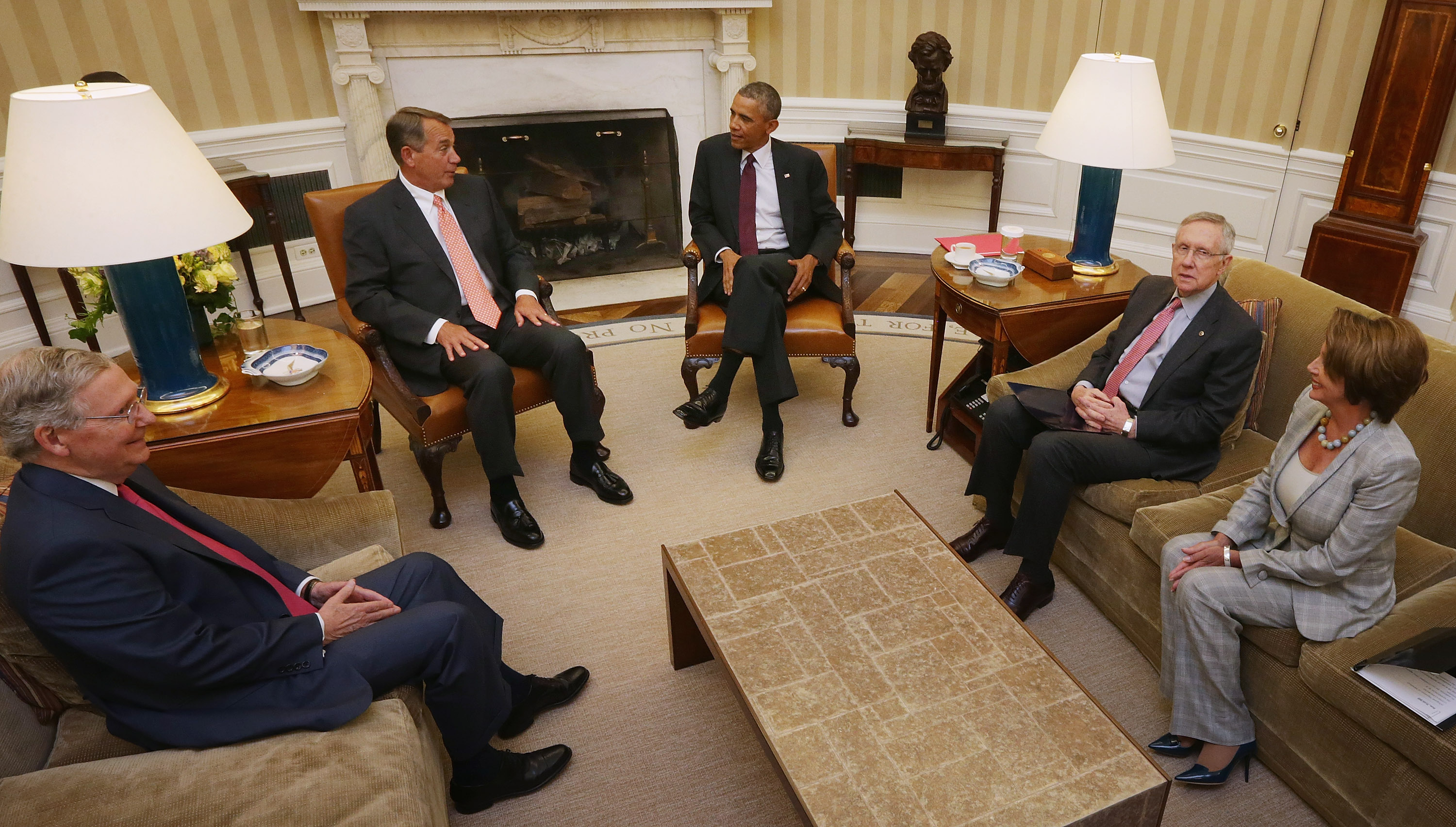 House Speaker John Boehner, R-Ohio, said Sunday he'd be "happy" to have Congress vote on an authorization of U.S. military involvement in the fight against the Islamic State of Iraq and Syria (ISIS), if President Obama requests it.

"The president typically in a situation like this would call for an authorization vote and go sell that to the American people and send a resolution to [Capitol] Hill," Boehner told ABC News. "The president has not done that. He believes he has authority under existing resolutions to do what he's done."

The U.S. has been launching air strikes against ISIS targets in Iraq for weeks, and last week that bombing campaign expanded into Syria as well. Mr. Obama also sought and received congressional authorization to equip and train moderate Syrian rebels to fight ISIS on the ground.

The president has argued he already has the necessary authority for the current operations in Iraq and Syria, pointing to the authorizations of military force Congress passed in 2001 and 2002 before the U.S.-led invasion of Iraq in 2003. But he's also said he believes Congress should render a vote in support of the current mission.

Boehner agreed on both counts.

"I think he does have the authority," the speaker said. "But the point I'm making is this is a proposal that the Congress ought to consider."

And though Congress is not in session right now, with members freed to campaign ahead of midterm elections in November, Boehner said he'd "bring the Congress back" if the president puts forward a resolution on the anti-ISIS campaign.

Deputy National Security Adviser Tony Blinken told "Face the Nation" on Sunday that the administration would "welcome" a new authorization of force.

"We do not require it," he said. "We have the existing authorization from 2001. That is a basis for proceeding. But we would certainly welcome Congress showing its support."

But some Republicans and even some Democrats close to the president are criticizing the Mr. Obama for not seeking congressional authorization earlier.

Sen. Rand Paul, R-Kentucky, suggested on Friday that the president was "arrogant" to strike without consulting Congress.

"Instead of coming to Congress, he illegally acts on his own," Paul, a potential 2016 presidential candidate, told the Values Voter Summit in Washington, D.C.

"Had I been the president, I would have called for a joint session of Congress," Paul added. "I would have laid out the threat and I would have requested congressional authority to respond. By failing, he missed the chance to galvanize the country and to become a great American leader."

And Sen. Tim Kaine, D-Virginia, a close ally of Mr. Obama's, suggested the president was simply wrong in asserting that he has the necessary authority under current law.

Kaine said the president's position is particularly surprising, given that "as a candidate for president, he made very plain that the president cannot unilaterally start a war without Congress."

But Kaine also suggested Congress deserves the greater share of blame. "We adjourned on the 18th of September," he said. "That's the second earliest recess before a midterm since 1960. And you know what? If the president had asked us to stay, like [British Prime Minister] David Cameron asked Parliament to come back, we would have."

Sen. Chris Murphy, D-Connecticut, told CNN on Sunday he's "concerned about the fact that we're not able to debate this in Congress right now, because there are some serious questions that we have to ask."

"What is our endgame? How long are we going to be in Syria?" he continued. "That's the check on a war without end, is a Congress speaking for the American people who can put an end date on an authorization for military force or put a limitation, so that you can't use ground troops."

The Wall Street Journal's Kimberley Strassel suggested Sunday on "Face the Nation" that Congress might vote on the anti-ISIS mission after November's elections, during the lame duck session before the new Congress takes over in January. But she said the vote could present a "real problem," even then.

"You're going to have the president's anti-war left, members of Congress who were reluctant to do this anyway, they now will not have the pressure of an election to sort of push them along behind the president either," she said. "There could be a very huge and ugly debate that could not go his way."