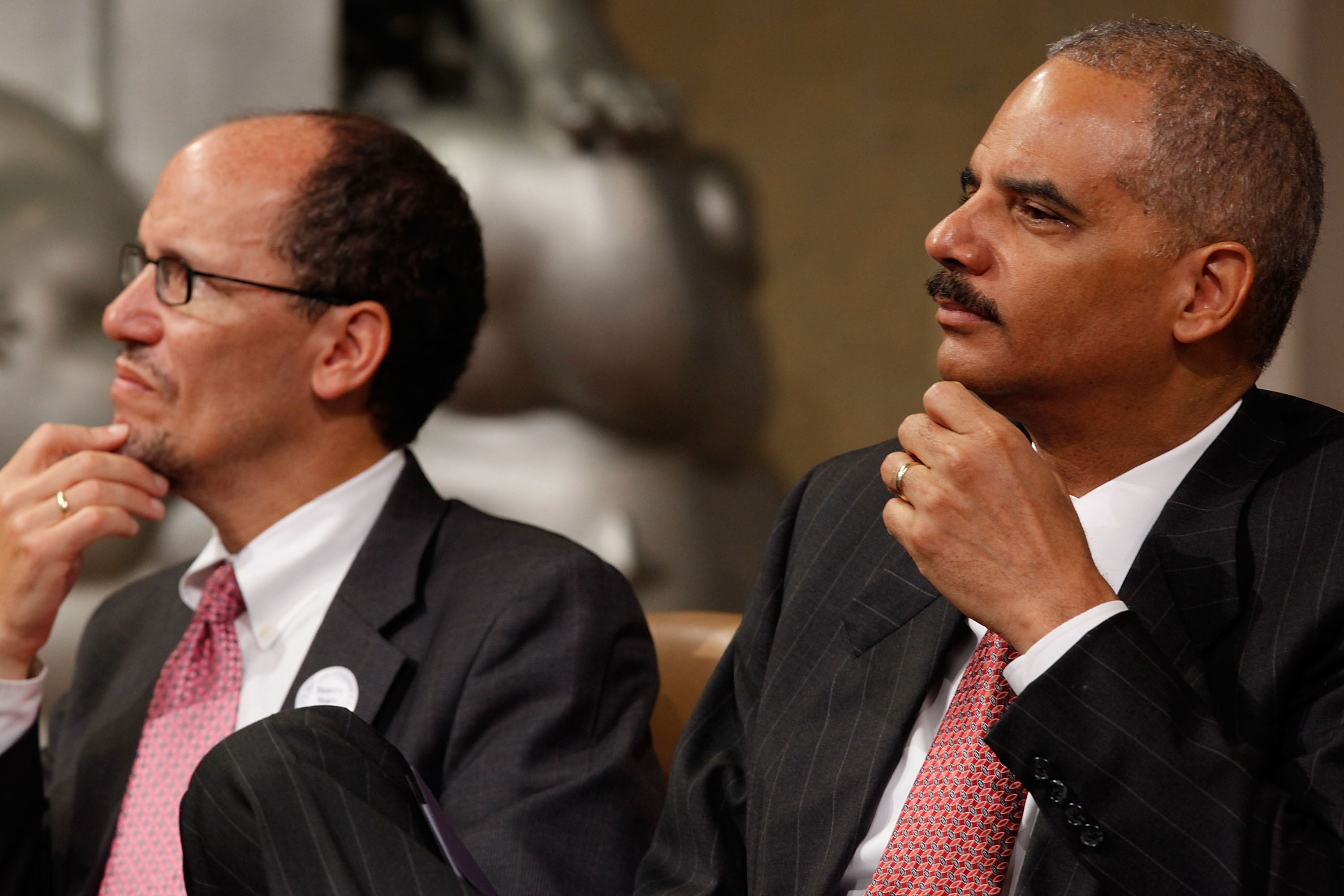 When Attorney General Eric Holder announced Thursday that he would leave the administration as soon as a successor was confirmed, speculation about his replacement quickly reached a fever pitch.

Holder, after all, has been with the administration from the start, and he's established himself as one of President Obama's most consequential (and controversial) Cabinet members. Whoever takes his place will have big shoes to fill.

The administration has emphasized that the selection process for a replacement is a long way from complete and that a number of candidates remain under consideration.

Perhaps the sharpest speculation has coalesced around Labor Secretary Tom Perez, a Harvard-educated attorney and former federal prosecutor who's well-liked by the president and his administration. Before jumping into the Cabinet, Perez was heavily involved in civil rights work at the Department of Justice under former President Bill Clinton and Mr. Obama.

On the heels of Holder, who made history as the first African-American attorney general, Perez would also be only the second Latino to occupy the post (Alberto Gonzales, under former President George W. Bush, was the first.) He could be a politically savvy choice for the administration, particularly given frustration among Latinos about inaction on immigration laws.

Two sources very close to the selection process confirmed to CBS News that Perez is under consideration, but no decisions have yet been made.

Former White House counsel Kathryn Ruemmler, who stepped down from that job earlier this year, has also been named as a potential replacement for Holder. When she left the administration for private practice last year after almost three years on the job, Mr. Obama praised her as "one of my most trusted advisers," a lawyer with an "uncanny" ability to anticipate and defuse problems.

Though Ruemmler's work as the top White House lawyer could give her an inside line to the selection process, it could also be a liability: previous attorneys general who once served as White House counsel, like Gonzales, have faced accusations that they were too close to the president and could not effectively serve as an independent check on the administration.

U.S. Solicitor General Donald Verilli has also been cited as a possible choice. As solicitor general, Verilli has been tasked with making the administration's case during oral arguments before the Supreme Court. Before assuming that job, Verilli was a deputy White House counsel and an associate U.S. deputy attorney general.

Though Verilli's arguments at the Supreme Court have given him a significant and visible platform, they haven't always earned him praise: critics savaged his defense of Mr. Obama's health care law during oral arguments in 2012 as halting and inartful. The White House was forced to issue a statement attesting to the president's continued confidence in Verilli, and the law was eventually upheld.

Some have speculated that Mr. Obama might decide to promote Holder's second-in-command, Deputy Attorney General James Cole. Before his current job, Cole worked in private practice. He previously worked at the Justice Department between 1979 and 1992.

Cole has generally thought to have acquitted himself well under Holder, working on issues ranging from telecommunications mergers to government surveillance. If the White House is looking for a fresh start after Holder's sometimes-divisive tenure, though, promoting his deputy may not be the way to go.

Manhattan U.S. Attorney Preet Bharara has also earned his fair share of speculation. As the top prosecutor for New York's Southern District, Bharara has been involved in some of the highest-profile legal cases of the last decade, including Bernie Madoff's Ponzi scheme, the prosecution of terrorists like the Times Square bomber and the effort to crack down on Wall Street after the 2008 financial crisis.

If nominated and confirmed, Bharara would be the first Indian-American in Mr. Obama's Cabinet and the first to head the Justice Department.

Jenny Durkan, the departing U.S. attorney in Seattle, has also been named as a possible successor to Holder. Though her resignation at the end of this month was announced before the attorney general said he would step down, it could be a case of fortuitous timing for Durkan, who was an attorney in private practice before Mr. Obama nominated her as a federal prosecutor in 2009.

Durkan is also a lesbian, and she became the first openly gay U.S. attorney when she was confirmed by the Senate in 2009. If she's nominated and confirmed as attorney general, she'll make history again as the first LGBT individual to head the Justice Department.

A number of other names have surfaced in recent days, including elected officials like Gov. Deval Patrick, D-Massachusetts, and Sens. Amy Klobuchar, D-Minnesota, and Sheldon Whitehouse, D-Rhode Island, among others.

Those three, at least, have insisted they're not interested. After Holder announced his decision to resign, Klobuchar's office released a statement thanking the attorney general for his "dedicated service" and adding that she intends to continue her work as senator.

Of course, where a job this big is concerned, a well-timed phone call from the president can do a lot to change minds.