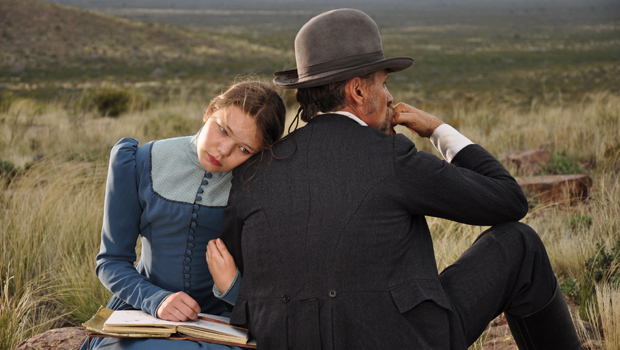 Cinematography has advanced in leaps and bounds over the past several decades, and artists have constantly challenged the limits of what the camera can produce (or re-produce), to the point where films can now take place in virtual landscapes, with computers creating virtual camera movements (and adding virtual people). Viggo Mortensen, the star of the new Argentinian film "Jauja," knows this better than most actors of his stature; he was front-and-center of "The Lord of the Rings" trilogy as Aragorn.

Director Lisandro Alonso, however, leaps into the past with his new film with a style of camerawork that recalls the earliest days of silent cinema, in which cinematography resembled portraiture -- static, composed with minute detail, and with no closeups that would produce a 30-foot-tall face. Actors appear as if on a vast proscenium stage, and body language is more telling than the terse dialogue.


Even the film ratio (4:3) is a throwback, generating square-ish images, with rounded corners, creating a very antique feel.

The differences from silent era imagery, though, are what constitute the most intriguing aspects of the cinematography of "Jauja": its sumptuous, warm color; and the depth of focus, leading characters to look off and journey into the far distance, to their doom.

Set in the 1880s, "Jauja" (which had its U.S. premiere Tuesday at the New York Film Festival) stars Mortensen as Dinesen, a Danish engineer who has traveled with his 15-year-old daughter, Ingeborg (Viilbjørk Malling Agger), to Patagonia, where the Argentine military is engaged in a war of conquest against indigenous peoples. The landscape is challenging, the isolation is deadening, and the silence is loud.

To watch a clip from "Jauja," featuring Viilbjørk Malling Agger and Viggo Mortenson, click on the video player below.

When Ingeborg runs off with a young soldier, Dinesen rides off into the desert in search of her. But a narrative which on the surface might resemble a Hollywood western melts into a much more existential quest, as Dinesen partakes in a "Heart of Darkness"-like journey into the wilderness.

There he encounters dying Argentinian soldiers, slaughtered by natives -- or perhaps by the renegade Argentinean Army officer who has gone rogue, a la Colonel Kurtz. Dinesen is ultimately reduced to traveling on foot, and you can just tell (even without having watched "Survivorman") that with every step he is walking closer to death.

But the journey is not so clear-cut, and in the midst of the barren landscape, with only a threshold of stars for company, he encounters what must be an apparition that speaks of time and the desires of men.

"Jauja" is beguiling in its beauty and head-thumping in the twists taken in locale and period, as we ponder how the 19th century travails of men fighting and dying at the farthest corners of the Earth might impact us, 130 years later.

"Jauja" will be released in the U.S. by Cinema Guild, though no release date has been announced. In Danish and Spanish. Running time: 1:48.