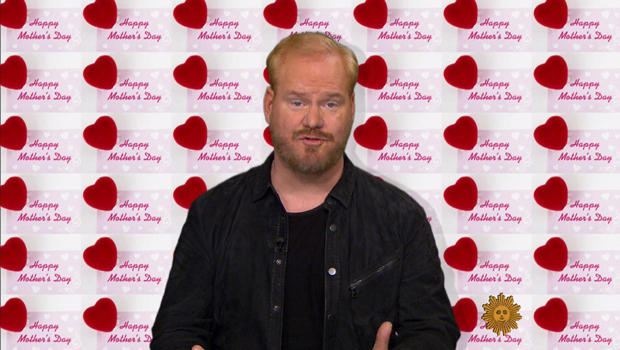 Mother's Day is a day for giving thanks, says Jim Gaffigan -- this year in particular:

I'm extra grateful this Mother's Day. Three weeks ago it was a discovered my wife -- and mother to my five children -- had a brain tumor.

It's gone! By the miracle and blessing of a fantastic surgeon, Dr. Joshua Bederson, it was all removed, and my wife is now home recovering.

The brain tumor is gone! -- along with my ability to ever win another argument.

It's not like I won a lot of arguments with my wife, but now I'm pretty much retired from spousal disagreements. My wife isn't the type to bring up the tumor.

Well, actually once she did: "I had a brain tumor." But I couldn't say anything. I couldn't be like, "Yeah, but that was, like, a week ago."

The surgeon told me that the tumor was the size of a pear, which was scary and confusing.  I don't know why tumors are always compared to fruit. What's the logic?

"Well, if it's a tumor it should probably be something edible." A pear? Are surgeons looking at tumors while painting a still life of a bowl of fruit? It seems weird. Why fruit? Initially I thought it was because surgeons are really bad at analogies.

But then I realized surgeons are probably dumbing it down for idiots like me.

"Well, this moron won't understand centimeters let alone circumference. I don't want to ruin sports for him. He certainly doesn't eat fruit, but he's probably seen a pear, most likely in a grocery store buying carbs."

Larger tumors are often compared to grapefruit; I wonder how grapefruits feel about that?

"I was already one of the least popular fruit; now I have to be compared to the worst kind of tumor? It ain't easy to be a grapefruit!"

So this Mother's Day give your mom, or wife, extra love. But probably don't give her fruit.