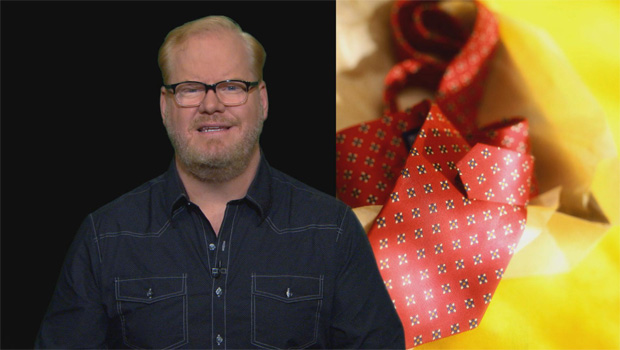 Here with a different take on Father's Day is our contributor Jim Gaffigan:

It's Father's Day. Ugh. How weird is that? A day to honor Dads? It doesn't make sense.

Mother's Day I get. They are mothers. They brought us into the world. Father's Day is like celebrating Darth Vader's birthday.

"I guess since we honored mothers in May we should probably give a day in June to that guy who gets up early on his one day off to abandon us to go golfing."

The gifts we give on Father's Day seem impersonal and absurd. A necktie? What is this, 1950? I guess giving Dear Old Dad a noose would be a little on the nose. So let's give him a silk noose with a goofy pattern.

Now before you think I'm some dad-hater I should tell you I'm a dad. I have a lot of kids. I say "a lot" 'cause I'm nervous I might get the number wrong.

I'm sure there are some really good dads out there, and I commend both of them.

I do do things with my kids, but when I come back from an outing, just know they are going to be sunburned, covered in mosquito bites and, yes, I forgot to get napkins when I bought them ice cream.

Wait, I lost one of their shoes? Well, at least I took them out! You're welcome.

Generally a day for dads is odd. Have you seen a dad? Sure, David Beckham is a dad, but most dads, frankly, look like me. There are NOT a lot of sexy dads. There's no dad equivalent to a hot mom or yummy mummy.

At least there shouldn't be. Because the phrase "dadbod" is not just an Internet joke, it's a serious condition that affects millions of us.

Dads are the human equivalent of cargo shorts. Yes, I do have cargo shorts. No, I don't know why that is funny or bad. I'm a dad!

Besides the societal pressure to balance out Mother's Day, what have dads done to deserve a Father's Day?

Frankly, plenty. Besides ordering pizzas and serving as the vice president of the family, dads have to battle their own selfishness every day. Dads strive to raise better, smarter, less dad-like humans. Remember, without the comparison to dads, moms would look horrible! Damn straight dads deserve a holiday!

Now, get me a beer, whatever your name is...