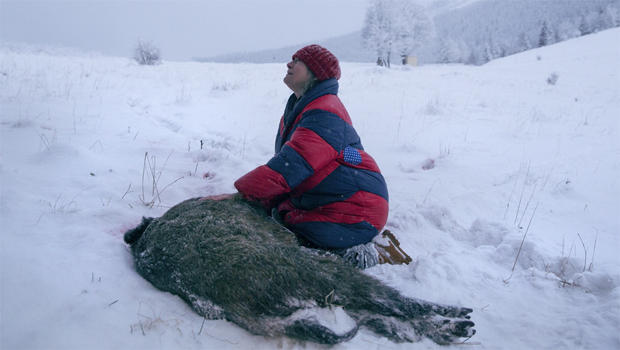 When you see eyes glow in the dark, you are probably not among friends. That is one cinema trope that comes to bear in "Spoor," a new Polish thriller in which a forest becomes littered with the bodies of hunters.

But while the mysterious eyes at night and hoofprints in the snow are visible to Janina Duszejko (Agnieska Mandat), an Earth Mother who communes with Nature and lives alone in a cabin in the woods. She has a hard time convincing the local police and prosecutor that animals are tied to a spate of deaths. That's just too weird.

But what would explain the deaths? And can animals commit murder?

Adapted from the novel "Drive Your Plough Over the Bones of the Dead" by Olga Tokarczuk, "Spoor" (which has its American debut Saturday at the New York Film Festival) won the Silver Bear at the Berlin International Film Festival. It is Poland's official entry for this year's Academy Award for Best Foreign Language Film.

Director Agnieszka Holland, whose exceptional 1990 World War II drama "Europa Europa" was nominated for an Oscar, has glided between film and television work, from the features "Angry Harvest," "To Kill a Priest," "The Secret Garden," and "Washington Square," to episodes of "The Wire," "Cold Case," and "House of Cards." "Spoor"'s depth of character and brisk pace are a testament to her facility with actors, starting with Mandat's commanding presence as Duszejko.

A fiercely independent woman whose beloved dogs disappeared at about the same time the killings began, Duszejko pushes a narrative of the supernatural and practices astrology, while also embracing science in her search for answers. But she's also a woman, as when she crosses paths with an entomologist whose interest extends beyond bugs.

There are deft touches supplied by the supporting cast, including Wiktor Zborowski as Duszejko's neighbor and possible suitor; Jakub Gierszał as a too-eager computer technician; and Patricia Volny as a young kept woman who becomes a suspect herself.

Even actors playing the victims of this murder spree (including Borys Szyc as a skuzzy gamekeeper with ties to the underworld) are afforded their moments.  Not that we feel really sorry for them when they go.

The film's fine technical credits are topped by the chilly cinematography of Jolanta Dylewska and Rafa Paradowski, and the haunting score by Antoni Komasa-Łazarkiewicz.

The slow build of clues behind the deaths, masked by winter's weather and the clouded vision of people unable to see what is before them, is reminiscent of another film in which a fealty to nature and the supernatural overshadows a crime, "The Wicker Man." In fact, for a film in which animals appear to be out for revenge, the audience can't help but root for them.

"Spoor" (which still has no U.S. distributor) screens Saturday and Sunday at the New York Film Festival. In Polish. Not rated. 128 mins.

To watch a trailer for "Spoor" click on the video player below.