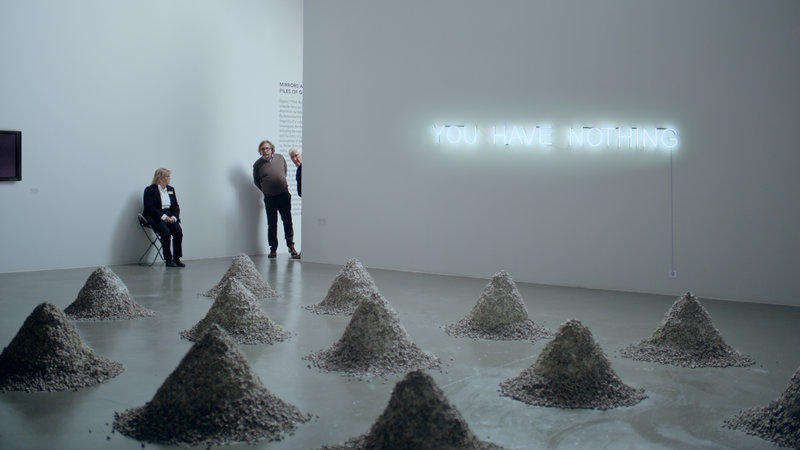 Society is the spectacle in "The Square," which cleverly satirizes the contemporary art world by accentuating its facade and leaving the audience to wonder: Farce or Fiction?

Although "The Square" is only the fourth feature by 43-year-old Swedish writer-director Ruben Östlund, he has become a familiar name among cineastes and a major player in the film festival circuit—winning the Cannes Film Festival's top prize, the Palme D'or, this year for "The Square," and the Un Certain Regard selection Jury Prize in 2014 for the critically-acclaimed "Force Majeure."

Building on its festival success, "Force Majeure" was well received by filmgoers that year, and like the avalanche that triggers the central chain of events in its narrative, the film seemed to be on a roll going into awards season. It was nominated for Best Foreign Language Film at the 72nd Golden Globe Award and selected as the Swedish entry for the Best Foreign Language Film at the 87th Academy Awards. While the film made the early round of the Oscar shortlist, it didn't secure a nomination, and Östlund didn't take the news well. His reaction became the snub heard 'round the film world after he uploaded a video recording of the rejection online for all to see. In turn, Östlund made himself into a sort of viral sensation and brought more attention to his film.

But it all seemed a little contrived. Was the videocamera really present in that moment to capture the director's authentic reaction? Does it matter?

These are the questions Östlund poses in "The Square," which ushers us into what could be, from the outset, a mirror image of a modern European city; replete with stylish, sleek surfaces, and a pristine contemporary art gallery run by a handsome curator named Christian (Claes Bang). Sure, reality may be suspended momentarily, but as soon as Christian opens his mouth in the first scene, empty pretension starts pouring out and the fallacy of this versimilitude cuts through the spectacle like a sharp knife. What emerges instead is the hyperbolic superficiality that motivates the characters and underscores the world they inhabit.

During an interview between Christian and an art critic, Anne (Elizabeth Moss), in the opening scene, Anne asks Christian a hilariously convoluted parody of a high theory question about the nature of art. Of course, he cannot possibly understand the question, let alone answer it. Instead, he makes a shallow attempt to explain his curatorial practice by throwing around art world buzz words, like the binary seen/unseen, and continues to describe his aim to fill the gallery space with important "cutting edge art." Anne appears stifled as Christian finally asks, "if I took your bag and placed it in the museum, would that make it art?" The interview abruptly ends there with this farcical exploitation of the notion that will forever plague the art world: "What can be considered art?"

The vacuousness that is revealed in Christian is reflected in various ways throughout the film, from the neon sign that hangs on a gallery wall which reads, "You Have Nothing," to a meeting with the gallery's organizing team that is disrupted by the crying baby present in the room. When the public relations strategy for the new installation "The Square" is proposed -- a problematic viral video of a tattered, young homeless girl blown to pieces inside the square, which is supposed to be a neutral space -- Christian is so distracted by his own selfish problems that he approves the video without question.

What follows is a series of bizarre scenes, none of which are explained. Christian ends up going home with Anne after a party, but before their one night stand commences Christian is baffled by the sudden appearance of a chimpanzee roaming through the apartment and sitting on the couch like a regular roommate. But Christian doesn't ask questions.

And so, if there are no questions, there are no answers. During a lavish banquet for art world denizens, a man posing as an ape (played by Terry Notary, known for his motion capture used for "Planet of the Apes") harasses a number of guests, but no one steps in to curtail his violent activity until finally he gets uncomfortably close to sexually assaulting a young woman. Up until then, it seems like his behavior is accepted as performance...art. Again, no questions asked.

Because in this absurd version of the modern world, society and art are one and the same: arrested in space and time and without reason.

To watch a trailer for "The Square" click on the video player below.