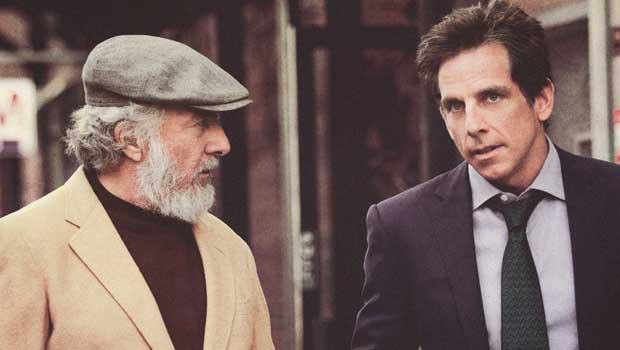 Harold Meyerowitz (Dustin Hoffman) is in search of laurels to rest on -- laurels that are rightfully his, or would be, if the retired artist hadn't long ago burned bridges among the faculty at Bard College. But the promise of a retrospective exhibition of his fidgety artwork is enough to raise his spirits, even at the indignity of being part of a group show.

His single-mindedness and determination to see the show through, to the obliviousness of all else, is to his grown children characteristic of the oft-married Harold's parenting skills. His kids -- Danny (Adam Sandler), an unemployed musician whose own marriage has collapsed; Matthew (Ben Stiller), a divorced entertainment manager, impatient and seething with bitterness; and Jean (Elizabeth Marvel), a mousey functionary with buried artistic aspirations -- are half-siblings with diametrically opposed careers but very similar temperaments, each jealously claiming and/or rejecting a part of their prickly dad.

When disputes arise over family matters, from the prospective sale of Harold's house to a medical emergency, the siblings clash in ways that peel the scabs off long-festering psychic and emotional wounds. The fruition of "The Meyerowitz Stories (New and Selected)," (which had its North American premiere Sunday at the New York Film Festival), is when the three move beyond petty slights or misread antipathies, and unite as the somewhat-cohesive family they'd never been.

Writer-director Noah Baumbach, whose credits include "The Squid and the Whale," "Margot at the Wedding," "Frances Ha" and "Greenberg" (as well as the screenplay for Wes Anderson's "Fantastic Mr. Fox"), has often examined the tremulous, strained relationships within families -- bitter parents, jealous siblings -- and the flighty search for freedom from the obligations (and protective comforts) of home.

Baumbach structures this film like the interconnected tales of a printed collection of short stories, each presented with its own title card, and each revealing a particular character in greater relief (and from their particular, neurotic vantage point). We also see sub-sets of the family: Danny and the apple of his eye, his college-bound daughter, Eliza (Grace Van Patten), an aspiring filmmaker whose student productions are just this side of porn; Danny and Jean, who are crutches to each other; Harold and Matthew, who maintains unquantifiable anger towards his dad; and Harold's current wife, Maureen (Emma Thompson), who -- his protestations of sobriety to the contrary -- appears continually drunk.

That Thompson and Hoffman are delightful in their roles in no surprise. But one of the film's biggest revelations is Sandler's performance, which is emotional, heartfelt, and poignant. Stiller, whose is often strait-jacketed into characters of buried energy and passion, also gets to cut loose a bit more than usual. Yes, blood is spilled.

In addition, Marvel, Van Patten, Judd Hirsch (as an artist-friend of Harold's with a much higher profile), and Rebecca Miller as an old acquaintance of Danny's who seems just out of reach, add their own bits of sparkle, as does composer and songwriter Randy Newman.

"The Meyerowitz Stories (New and Selected)" is distributed by Netflix. The film, which screens at the New York Film Festival on Monday and Tuesday, will be released in select theatres on October 13, while simultaneously debuting online. Not rated. 110 mins.

To watch a trailer for "The Meyerowitz Stories (New and Selected)" click on the video player below.