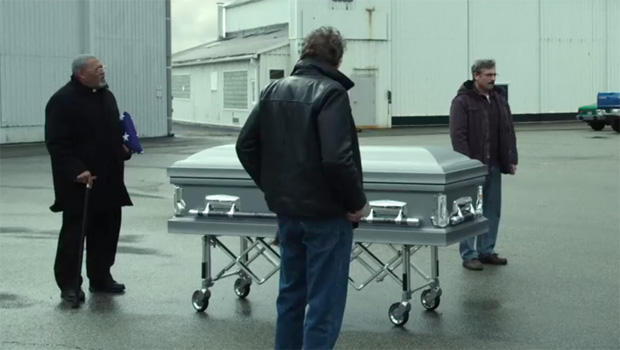 In the moving comedy-tragedy "Last Flag Flying," three buddies from the Vietnam War reconnect for a heart-wrenching mission, rekindling their camaraderie three decades later while reevaluating the costs of the war fought when they were young.

Set in 2003, just as the U.S. is becoming mired in another questionable war, the film follows a former Navy Corps medic, "Doc" Shepherd (Steve Carell), who turns up at the Norfolk, Va., bar run by a Marine vet from his days in Vietnam. Sal (Bryan Cranston) is oddly overjoyed to see his old comrade-in-arms, who had spent two years in the brig on a trumped-up charge, thanks in part to him. But the boisterous Sal still retains a taste for adventure, which is what Doc offers, enjoining him to meet up with yet another former Marine, Richard Mueller (Laurence Fishburne), now a Baptist minister after having turned over a new leaf.

Once reunited, the others learn why Doc has reappeared in their lives after more than 30 years: Doc's son, Larry Jr., has been killed in Baghdad, and Doc needs them to attend the boy's funeral. But the funeral plans take a detour, once Doc decides he does not want his boy buried at Arlington and corrals his friends to accompany the body back to New Hampshire instead.

"Last Flag Flying" (making its world premiere Thursday at the New York Film Festival, before opening in theaters November 3) is suffused with sadness, but with a levity that transcends the horror lurking behind Carell's grief-stricken countenance. The film is reminiscent of a wake at which friends and family of the departed laugh at treasured memories, digging humor out of pain as a way to endure. Played out as a road movie, it's also a war movie, but one in which the conflicts arise from the aftermath of war, years after the fact.

As Sal, Cranston is feisty and ready for combat, and surprisingly easy to be talked into an interstate trek. He awakens to the challenge of bringing Doc back from the dead, as it were. Carell's quiet turmoil, daubed with glimmers of humor, evokes the pain of a Gold Star father searching for answers, and being torn apart further by what he learns.

As Rev. Mueller, Fishburne projects the proud façade of a man who has put a troubled past behind, reveling in the serenity of a life of purpose and clarity. But scratch his surface, and the old foul-mouthed sinner comes alive again, reliving his younger self's moral choices. (It's easy to imagine Fishburne as that young man, given his role as a 17-year-old gunner's mate in the 1979 film "Apocalypse Now.") Yet his chagrin at being exposed by Sal fades as their camaraderie is rejuvenated.

Director Richard Linklater, who was behind the Oscar-nominated "Boyhood," has succeeded best when delving into the poignant dreams of eccentrics and outsiders (as in "Slacker," "Dazed and Confused," "Waking Life" and "School of Rock"). That gift serves him well with this script, as Doc, Sal and Mueller are -- after all these decades apart -- outsiders to each other, becoming reacquainted as older (and very different) men.

The film itself is a revisitation, as Darryl Ponicsan's 2005 novel, "Last Flag Flying," was a sequel to his debut novel, "The Last Detail," similarly about a military escort. (That book was adapted into a 1973 film starring Jack Nicholson and Randy Quaid.) "Last Flag Flying" returned to the lives of his characters three decades on, and though the characters have undergone some revisions, Linklater's film retains the structure of his story.

The film keeps a narrow focus, rarely leaving the trio's proximity, and that's just fine, as they make for excellent and entertaining company. The three leads are rock solid, as is J. Quinton Johnson as a Marine tasked with guarding Larry Jr's body on its journey.

The most moving theme of "Last Flag Flying" is about the prominence of lies in wartime, applicable both to the Vietnam War and to the Iraq War. The circumstances of Larry Jr's death in Baghdad become cloaked by military and political expedience to mask the horrors of combat, further fueling the trio's distrust of the government over their own tragic circumstances as young men on the battlefield. As the three learn for themselves, however, a lie can be as much a gift as a deception.

After its debut at the New York Film Festival, "Last Flag Flying" (distributed by Amazon Studios) opens in theaters November 3. 124 mins. The film is rated R, for language no minister - veteran or otherwise - would be heard saying.

To watch a trailer for "Last Flag Flying" click on the video player below.