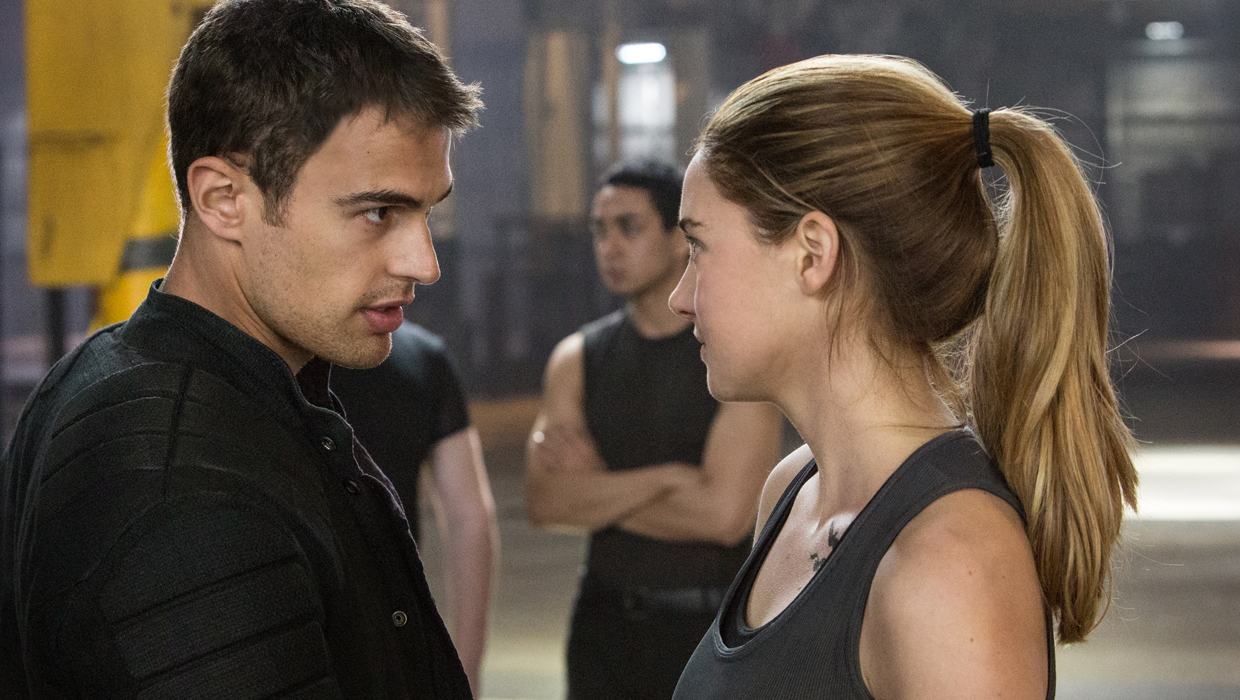 There's plenty of time yet to look back on the best films of 2013 -- that's what the Oscars, Golden Globes, SAGs and every other upcoming awards show will do -- so instead, we're looking ahead to the ones coming out in the New Year.

We've organized this list by month, touching on some of the films you might want to pencil in on your calendar. Keep in mind that these dates aren't set in stone -- more films will get added, some release dates could change -- but it should give you a general sense of what's coming up for 2014.

Kellan Lutz will play the titular (and often shirtless) Greek demigod in "The Legend of Hercules" (Jan. 10), as he's exiled and sold into slavery because of a forbidden love and must fight his way back to his rightful place in the kingdom.

Mark Wahlberg plays a Navy SEAL sent on a doomed mission in the based-on-a-true-story tale "Lone Survivor" (Jan. 10). Other films coming out in the first month of 2014 include the "Paranormal Activity: The Marked Ones" (Jan. 3), Spike Jonze's tech-savvy love story "Her" (wide release Jan. 10), Aaron Eckhart in "I, Frankenstein" (Jan. 24) and Kate Winslet and Josh Brolin in Jason Reitman's "Labor Day" (wide release Jan. 31).

George Clooney's "The Monuments Men," about a group of experts tasked with saving Europe's art from the Nazis during World War II, settled into a Feb. 7 spot after being pushed back from December.

Fans of "Divergent" will be eager to see how the first book in Veronica Roth's bestselling trilogy will look on the big screen. Shailene Woodley ("The Spectacular Now") is taking on the role of Tris, a teen living in a futuristic Chicago where citizens are divided into factions based on their valued virtues (March 21).

Another movie with a built-in fan base is the Kickstarter-funded "Veronica Mars" (March 14). Wes Anderson's "The Grand Budapest Hotel" is also coming out this month (March 7), as is "300 Rise of an Empire" (March 7), Nicole Kidman in "Grace of Monaco" (March 14), the star-studded "Muppets Most Wanted" (March 21), the first volume of Lars von Trier's two-parter "Nymphomaniac" (March 21) and Darren Aronofsky's Biblical epic "Noah."

Summer movie season doesn't get under way until May, but Marvel gets a head start with the sequel "Captain America: The Winter Soldier," out April 4. Chris Evans returns as the patriotic superhero, alongside Scarlett Johansson, Sebastian Stan and Robert Redford.

Also on the lineup for this month are Jude Law and Emilia Clarke ("Game of Thrones") in "Dom Hemingway" (April 4), the animated sequel "Rio 2" (April 11), Johnny Depp in the sci-fi film "Transcendence" (April 18), "Nymphomaniac: Part Two" (April 18) and Cameron Diaz, Leslie Mann and Kate Upton in the comedy "The Other Woman" (April 25).

Cue the blockbusters! Summer movies kick off with Andrew Garfield as web-slinger Peter Parker in "The Amazing Spider-Man 2" (May 2), with Emma Stone returning as Gwen Stacy and Jamie Foxx joining as the villain Electro.

There's also the animated "Legends of Oz: Dorothy's Return" (May 9), a big-budget reboot of "Godzilla" (May 16), Jon Hamm scouting for baseball talent in India in "Million Dollar Arm" (May 16), the time-traveling mutants of "X-Men: Days of Future Past" (May 23), Angelina Jolie as a Disney villain in "Maleficent" (May 30) and Seth MacFarlane's comedy-Western "A Million Ways to Die in the West" (May 30).

Channing Tatum and Jonah Hill are back for more laughs -- and heading to college -- in the "21 Jump Street" sequel "22 Jump Street," coming to theaters on June 13.

Grab the tissues when you see "The Fault in Our Stars," about two cancer-stricken teens who fall in love (June 6). There's also Tom Cruise in "Edge of Tomorrow" (June 6), the animated "How to Train Your Dragon 2" (June 13), Clint Eastwood directing an adaptation of the musical "Jersey Boys" (June 20) and more 'bots in "Transformers 4: Age of Extinction" (June 27).

Humans and apes are on the brink of war in "Dawn of the Planet of the Apes," with Andy Serkis back as top ape Caesar and Gary Oldman leading the human resistance (July 11).

There's also Melissa McCarthy in the comedy "Tammy" (July 2), "Jupiter Ascending" (June 16) from the filmmakers behind "Cloud Atlas" and "The Matrix," the animated sequel "Planes: Fire and Rescue" (June 16) and Dwayne Johnson in another Hercules film, "Hercules: The Thracian Wars" (July 25).

The month kicks off with Marvel's "Guardians of the Galaxy" (Aug. 1), starring Zoe Saldana, Chris Pratt, Benicio Del Toro and the voices of Bradley Cooper and Vin Diesel.

Michael Bay's "Teenage Mutant Ninja Turtles" is due to hit theaters on Aug. 8, and Sylvester Stallone, Jason Statham the rest of the team are back for "The Expendables 3" (Aug. 15). There's also the adaptation of Lois Lowry's "The Giver" (Aug. 15), "Sin City: A Dame to Kill For" (Aug. 22) and Natalie Portman, Ewan McGregor and Joel Edgerton in the Western "Jane Got a Gun" (Aug. 29).

Remember the name Gillian Flynn -- two of her books are getting big-screen adaptations this fall. The first to come out is "Dark Places," starring Charlize Theron as a woman looking back into the murders of her mother and sisters when she was a child (Sept. 1).

Milla Jovovich also returns as Alice in "Resident Evil 6" (Sept. 12), Rose Byrne and Timothy Olyphant co-star in "This is Where I Leave You" (Sept. 16), Morgan Freeman and Ashley Judd reteam for "Dolphin Tale 2" (Sept. 19) and Denzel Washington and Chloe Grace Moretz are set for the thriller "The Equalizer" (Sept. 26).

Chances are you (and quite possibly your friends, siblings, parents and all of their book clubs) read "Gone Girl," Flynn's bestselling thriller about a woman's mysterious disappearance, leaving her husband as the prime suspect. Rosamund Pike and Ben Affleck star in the film version, out Oct. 3.

You can also check out a big-screen version of the classic book "Alexander and the Terrible, Horrible, No Good, Very Bad Day" (Oct. 10), Robert Downey Jr. in "The Judge" (Oct. 10) and, just in time for Halloween, "Paranormal Activity 5" (Oct. 24).

Christopher Nolan, the man behind "Inception" and "The Dark Knight" trilogy, directs and co-writes "Interstellar," about a group of explorers who use a newly-discovered wormhole to travel through space (Nov. 7).

Jim Carrey and Jeff Daniels also return as Lloyd and Harry in "Dumb and Dumber Too" (Nov. 14), while Jennifer Lawrence portrays Katniss Everdeen again in "The Hunger Games: Mockingjay -- Part 1" (Nov. 21) and the "Horrible Bosses" gang comes back for "Horrible Bosses 2" (Nov. 26).

A certain raincoat-clad Peruvian bear is arriving on the big screen in "Paddington," with Colin Firth voicing the titular children’s book character and Nicole Kidman playing a villainous taxidermist (Dec. 12).

The year will finish out with films including Ridley Scott's "Exodus," with Christian Bale as Moses (Dec. 12), the final film in "The Hobbit" trilogy, "The Hobbit: There and Back Again" (Dec. 17), the Quvenzhane Wallis-starring remake of "Annie" (Dec. 19), Jake Gyllenhaal  scaling "Everest" (Dec. 19), Angelina Jolie in the director's chair for the heroic story "Unbroken" (Dec. 25) and the star-studded, big-screen take on the musical "Into the Woods" (Dec. 25).

Tell us: Which 2014 films are you most looking forward to?