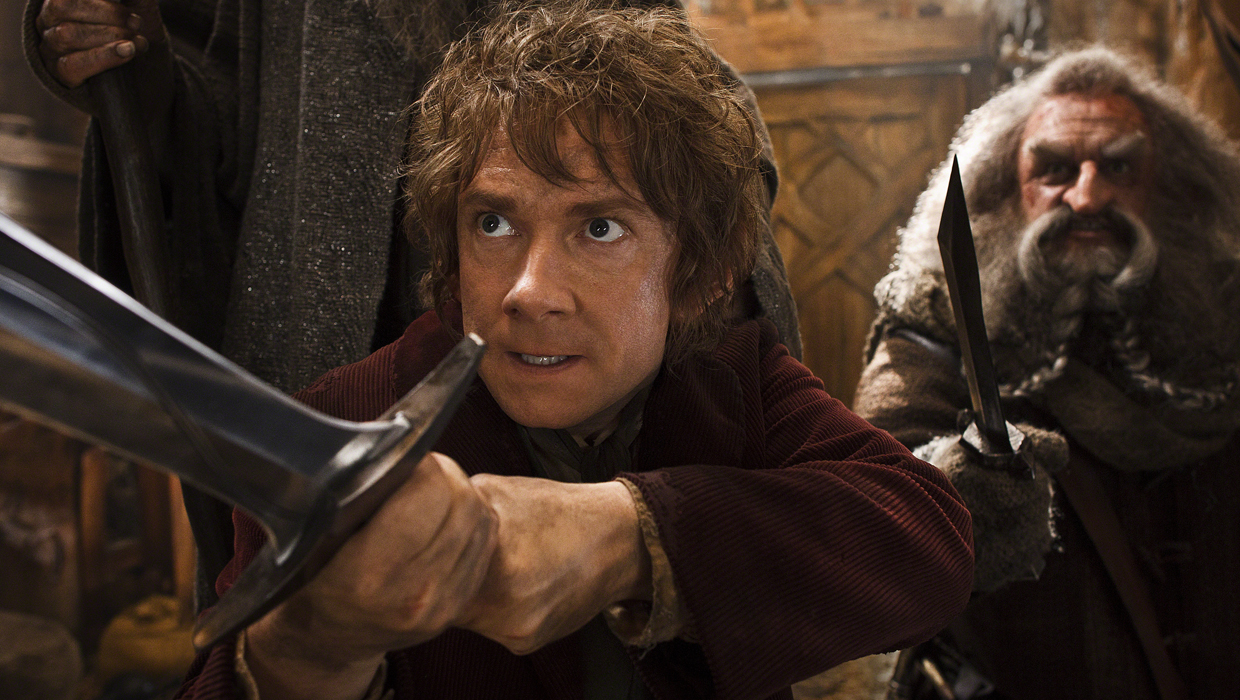 On a busy pre-Christmas weekend at the box office, "The Hobbit: The Desolation of Smaug" held off a very different sequel, "Anchorman 2: The Legend Continues."

Peter Jackson's "Hobbit" sequel took in $31.5 million in its second weekend of release for Warner Bros., according to studio estimates Sunday. Though the film isn't matching the pace of the first "Hobbit" movie, "An Unexpected Journey," "The Desolation of Smaug" is doing well abroad. It's now made more than $400 million worldwide, including $96 million internationally over the weekend. Critics generally liked the film, which scored a 75 percent rating on Rotten Tomatoes.

The "Hobbit" topped Will Ferrell's "Anchorman" sequel, which nevertheless opened strongly in second place. The Paramount Pictures comedy made $26.8 million over the three-day weekend and $40 million since opening Tuesday night.

The much-marketed "Anchorman 2" actually outperformed "The Hobbit" on Friday, but failed to best it over Saturday and Sunday. But the $50 million comedy, which Paramount initially turned down, also suggested it will be more popular abroad than most comedies. It made $13.4 million in six international markets.

The 2004 original opened with $28.4 million, but only grossed $5.3 million internationally.

"'Anchorman' will have a much larger footprint internationally than the last `Anchorman' did," said Don Harris, head of domestic distribution for Paramount. "Will Ferrell has done a really good job of turning this character into something that travels around the world."

"It's such a crowd-pleaser as well as a critical hit," said Sony's distribution head Rory Bruer. "We have so much more to look forward to, including Christmas Day."

The pre-Christmas weekend is a sought-after release date, one that usually offers films especially good legs at the box office as moviegoers flood theaters over the coming weeks. The weekend box office was up nearly 30 percent over the same weekend last year.

"It is going to be one heck of a crowded Christmas Day at the movie theater," said Paul Dergarabedian, senior media analyst for box-office tracker Rentrak. "This is setting up to be perhaps one of the biggest Christmas Days ever."

One obvious casualty from the many options at the multiplexes was 20th Century Fox's "Walking With Dinosaurs," a 3-D attraction that hoped to draw moviegoers with digital dinosaurs. Made for $85 million, it fell flat with just $7.3 million over the weekend.

The family market has instead been cornered by Disney's animated "Frozen," which added $19.2 million over the weekend. In five weeks of release, it's made $344 million worldwide.

The other Oscar-hopeful that went wide over the weekend was Disney's making-of "Mary Poppins" tale "Saving Mr. Banks." The film, starring Emma Thompson and Tom Hanks, made $9.3 million.

Spike Jonze's acclaimed futuristic romance "Her," starring Joaquin Phoenix and Scarlet Johansson, opened in limited release. It took in $361,000 over five days in three cities, good for a $60,000 screen average.

The third film in the Indian action series, "Dhoom 3," set a record for a U.S. debut for a Bollywood export. The film made $3.3 million stateside, good enough for ninth place at the box office.

Despite some high-profile summer bombs, the 2013 box office is on track to narrowly surpass last year's record box office of $10.8 billion, with one weekend to go in the year.