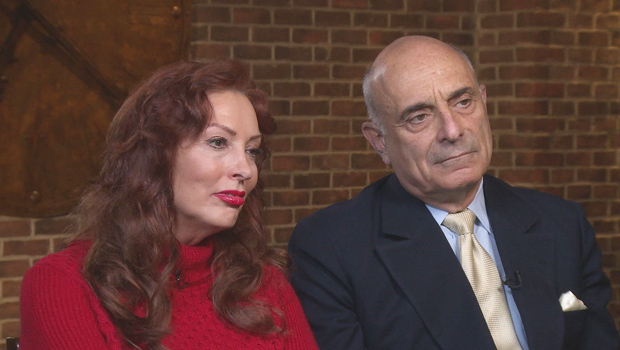 "Good guys with guns are the best defense against bad guys with guns," or so goes one argument. But how does that theory stand up in practice? Rita Braver takes a closer look...

The video surveillance from an Albuquerque motel shows it clearly: A man paces the corridor; a woman exits her room to get something from her car, and then returns.

"And from out of nowhere this guy came back around the corner," recalled Lynne Russell, "and this time he had a gun and he was pointing it right at my abdomen."

At that very moment, Russell's husband, Chuck De Caro, emerged from the shower. He recalled: "He then moved the gun from pointing at my wife to pointing at me, and he said, 'I need your money.'"

But the gunman did not know that Russell, a former CNN anchor, and De Caro, a former CNN reporter who trained as a Special Forces soldier, habitually travel with guns that they are licensed and trained to use.

Russell was able to slip her gun from the nightstand into her purse, which she handed to De Caro, telling him "'Take a really good look inside here; see if there's anything you can find that we want to give the man.' And Chuck looked and he said, 'Yes, there is."

And, they say, as the suspect started to shoot, De Caro fired back: "And I killed him," he said.

"But you got shot yourself?" asked Braver.

"Well, that's the nature of the game," De Caro replied. "It's called combat."

You might call them "Good Guys with Guns" -- an idea touted by some Republican presidential candidates [as in Donald Trump's idea on last November's Paris terrorist attack: "If they had guns on the other side of the room, with the bullets going in the opposite direction, you would not have had 130 people killed, that I can tell you right there"], and it's become a rallying cry for Wayne La Pierre, CEO of the National Rifle Association, the nation's most prominent gun rights group.

We asked to speak with LaPierre, but instead the NRA provided former president and current board member Sandy Froman, of Tucson.

Braver asked, "Could a good guy with a gun really stop a terrorist attack?"

"I think a good guy with a gun could protect himself or herself," Froman replied. "I think If you have a choice of using your gun to save your life or having your life taken, then yes, I think you should have that choice."

"Basically the thought is, the more law-abiding people who own and are trained to use guns, the safer we'll all be?"

This is also a personal issue for Froman, who purchased her first gun at 32, after an attempted break-in at her home.


"I think that we all need to be prepared in case something really evil happens to us," Froman said.

And gun sales are up, with background checks on buyers hitting a record high of more than 23 million last year.

Even some school personnel are preparing for the worst, while many gun rights advocates are saying it's time to end most bans on guns in public places, known as gun-free zones.

"Somebody intent on rape or robbery or murder is not gonna obey that little circle with the line through it,' Froman said, who called those within "gun-free zones" "sitting ducks."

But Colin Goddard sees it differently. He was in French class at Virginia Tech on April 16, 2007:

"We heard this loud bang bang bang, this succession of noises. You could hear it, and then it was getting louder. And then all of a sudden you could see bullets coming in the front of the classroom," he recalled.

Goddard was lucky. Though shot four times, he recovered. Thirty-two people were killed. Yet he rejects the idea that "good guys with guns" could have saved the day:

"That was never really a thought that came in my mind during the course of the event," he said. "I was much more concerned with how can we do a better job of stopping the one gun from coming into that classroom than trying to put a gun in every single classroom of my school, you know? That felt like it would be a much more dangerous situation."


Goddard now works for Every Town for Gun Safety, advocating for stronger gun control laws that he says would keep guns away from bad guys in the first place.

But the NRA insists we don't need more laws.

"Every time you pass a new law instead of enforcing the existing laws, you further burden law-abiding citizens," said Froman.


As for Chuck De Caro, he's undergone six surgeries, and now must use a cane. He and his wife, Lynne Russell, believe that their right to bear arms saved their lives. But they say being a good guy with a gun is not a political decision, but a personal one:

"I don't tell anybody, go out and get a gun," said Russell. "I don't, right? But if you're going to, you should be very well-trained. And then understand that even if you have to use that gun to defend yourself, that life is never gonna be the same again."