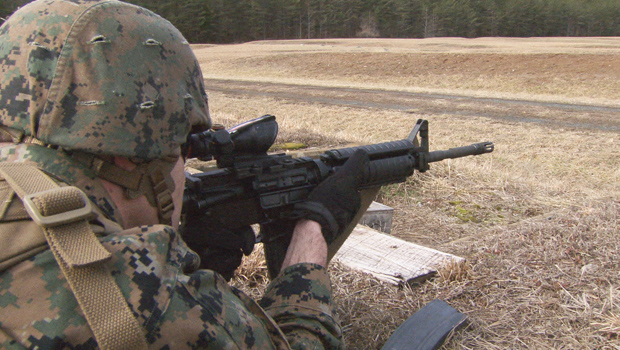 However heated the debate over guns and civilians, few question the importance of firepower for our armed forces. Here's David Martin:

There are gun lovers -- and then there are Marines.

To a Marine infantryman like Sgt. Joshua Sherman, his weapon may mean the difference between success and failure, life and death.

"Our weapon system is basically your tool to keep yourself and your friends alive and then do the job at hand," he said.

Marines refer to their rifle as "she" -- like a girlfriend.

"When you push forward and you're actually in Iraq, in Afghanistan or wherever the Marine Corps might send you, that weapon never leaves your side," Sgt. Sherman said.

He's holding an M4, the newest rifle to be issued to Marines. His battle buddy, Corporal Shamar Methany, is carrying the older M16. The M4 has a slightly shorter range, but it's two pounds lighter.

"Two pounds is a lot when you're counting everything that you're trying to put on an infantry Marine," Sgt. Sherman said.

The barrel of the M4 is also six inches shorter, which doesn't mean much out on the firing range, but could mean everything in urban combat.

"If you're coming around a corner into a hallway, inches can mean a big difference when it's showing whether you're coming or not," he said.

All the rifles are becoming smaller and lighter, but Col. Roger Turner -- the man in charge of developing new weapons for the Marines -- says the addition of a telescopic scope is the biggest change. Every rifle has one, not just sniper rifles, so that "what would be considered a sniper-like effect can be achieved by this by every single Marine," Col. Turner said.

The real snipers are creeping through the woods carrying a very different kind of weapon designed to pick off the enemy at long range. Like the camouflage suit Sgt. Jacob Ruiz is wearing, his rifle is custom-tailored.

"I don't imagine there's anybody that has a closer relationship with his weapon than a sniper," Martin said.

"Snipers definitely fire far more rounds with a lot more responsibility and understanding what that round is doing than any other formal infantry," Sgt. Ruiz replied.

As with the infantry rifles, the Marines are switching to a smaller, lighter sniper rifle.

Sgt. Jarod Chambers says he will miss his weapon ("This is all I've known since I've came to this"), but he can console himself with the fact the new model is four pounds lighter.

"We have a thing over there: Ounces equal pounds, and pounds equal pain," said Sgt. Chambers. "So the less ounces you've got, the less pain you're going to have."

Each rifle in a Marine fire team has a different purpose. The snipers are usually first to fire, trying to pick off high-value targets, like enemy machine guns, giving the rest of the fire team a chance to move across open ground.

Machine Gunner Ryan Moore is the first to come up, laying down a base of fire.

"That could be risky," said Martin.

"When I was in Afghanistan it definitely seemed that a machine gunner had a nice target painted on his flak jacket for the enemy to shoot at," Moore said.

The weapon's drum contains 200 rounds, which he fires in two- to three-second bursts. Any longer and the gun's recoil will make his shots go wild.

"In my opinion, for the most part machine guns will actually change or paint the actual outcome of the battle space," said Moore. "I'm going to instill confidence in my squad and their ability to move forward, and then I'm also going to put that fear in the enemy where they don't want to fight."

These Marines could spend all day telling you about the intricacies and idiosyncrasies of their weapons, but here's the one thing you really need to know about a Marine and his rifle:

"It is a very personal thing, and it's something that you take ownership of," said Sgt. Sherman. "If there's something wrong with it, it's something you didn't do properly, not the weapon itself. You fix it, you make it better, then you get back in the fight."

"So the weapon is only as good as the Marine?" asked Martin.