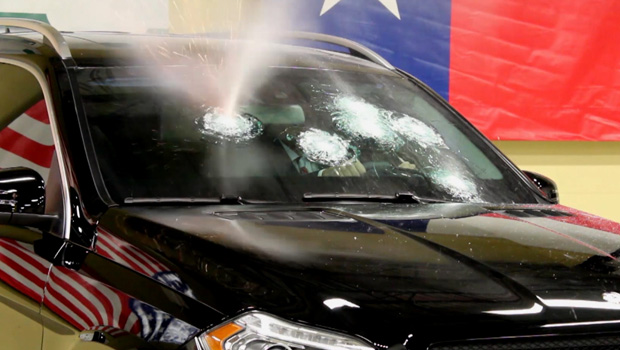 To protect against gun violence, experts are testing the limits of just what "bulletproof" really means. Serena Altschul has been watching them at work:

It may look like your average, everyday auto shop, except for one thing: Extreme quality control.

"These aren't bank trucks that we're talking about," said Kimball. "These are passenger vehicles that can stop any type of rifle round or handgun, even up to hand grenades, IEDs, those type of explosives."

But don't call these vehicles "bulletproof."

"No, bulletproof does not exist," Kimball said. "All our vehicles are 'bullet-resistant.' It's not like the movies; the bullets don't bounce off. It actually catches the bullet. The glass will crack, it'll splinter, [but] it's not gonna penetrate."

Tearing cars down to their skeletons, Kimball and his crew install custom ballistic steel plates and ballistic glass, and then put it all back together as good as new.

The cost to armor a car goes from $40,000 on up, and Kimball says business is good and getting better:

"Economic stress in the world, the economic downturn, terrorism, that type of world that we live in nowadays is good for business, unfortunately."

So, who needs these armored vehicles? "Our clientele range from heads of state of foreign countries, all the way down to a soccer mom here in the U.S."

Detective Michael Levay of the NYPD knows firsthand the value of protection. In 2013 he was shot in his ballistic vest during a routine stop for a minor subway violation.

"The gentleman gets up," he told Altschul. "He starts walking towards the train car door. I see him reach into his waistband, like, a jerk motion with his hand. He pulls out a gun. First round goes off. It strikes me in my vest.

"When I first got hit, it felt like a ton of bricks," he said.

"I got hit pretty much dead center of the vest. Thankfully it stopped it. I believe it pierced the vest a little bit, but enough that all I had was pretty much a giant bruise."

The first commercially-available bullet-resistant vest was invented in 1893 by a Chicago Catholic priest named Casimir Zeglen, who proved his garment worked by having himself shot in front of an audience.

Soon, high-profile people around the world bought the silk-and-steel vest, including the Archduke Franz Ferdinand of Austria

But Ferdinand reportedly forgot to wear his vest on June 28, 1914, when an assassin shot and killed him, igniting World War I.

Fortunately for Detective Levay, he didn't forget to put his vest on.

"I know I'm here because the vest saved my life," he replied. "And I try to be the guy to talk to some of the younger officers, and just, 'Listen: Take care of yourself. You could get into a dangerous situation. Watch yourself. Watch your partner's back, and be careful out there.'"

Hail and farewell: A tribute to those we lost in 2021