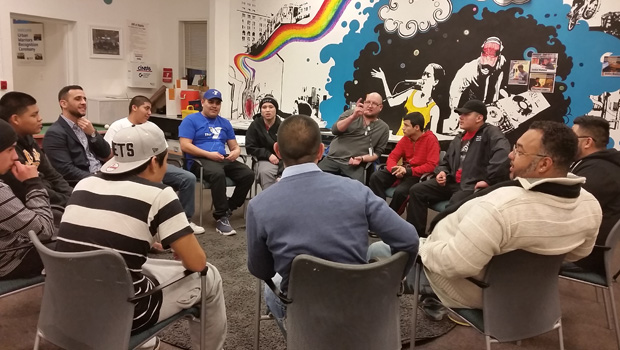 As of Friday, the city of Chicago has racked up 546 shootings this year. Some unarmed "Urban Warriors" are trying to put young people on a different course. Here's Michelle Miller:

Eddie Bocanegra is determined to help Chicago teenagers build a bright future by using lessons from his own dark past.

"I shot and killed somebody," said Bocanegra, who served 14 years and three months in prison for that gang-related murder, getting out early for good behavior and earning a social work degree.

"I think there is no better way to ask forgiveness than by doing the work that I do," he said.

His work is Urban Warriors, a program that he launched back in 2014 at the YMCA of Metro Chicago. The goal: To halt an epidemic of gun violence.

"Every time that we see a 14-year-old kid being shot and killed, it has a ripple effect in the rest of our communities," he said.

Lately, those ripples look more like tidal waves. With roughly 100 homicides already, 2016 is Chicago's deadliest start to a year in almost two decades -- and most of the victims are African-American.


Nationwide, homicide is the leading cause of death among young black men. Nine out of 10 times, those fatalities are by gun.

"I would argue that we've lost more children in our streets in the last five years than we have in the last ten years in war," Bocanegra said.

It's a comparison by design. Bocanegra believes that military veterans are uniquely qualified to mentor young men from high-crime neighborhoods. So he brings the two groups together at weekly support group meetings, where they share stories and bonding activities.

The common thread: Post-Traumatic Stress Disorder from time spent on a battlefield.

"I went to a nightclub for one of my cousin's parties," said Jamal McPherson, a 22-year-old veteran. "And this is like a week and a half ago. And they started shooting inside of the club. A girl, she got shot in her head. And a security guard, he was shot in his leg. And so, we had to apply a tourniquet to his leg."

McPherson is not much older than the young men he mentors at Urban Warriors. When he was their age, he left the streets of Chicago to join the military. "By me sharing my traumatic experience, it's opened up a door for them to share their traumatic experience and confide in us," he said.

Three young men -- 18-year-old Miguel Arreol and 17-year-olds Jaime DeLuna and Noah Bakr -- had all joined gangs early. Miller asked them, "Some of the veterans aren't much older than you are. Are they big brothers? Father figures?"

Miguel said he was 10 years old when he held his first gun. Jaime, 14.

"And how easy is it to get one?" Miller asked.

But since graduating from Urban Warriors, they've left guns and gangs behind.

The program is now being studied at the University of Chicago. But one thing seems clear already: There's a little bit of hope where there was once no hope at all.

The films of Wes Anderson