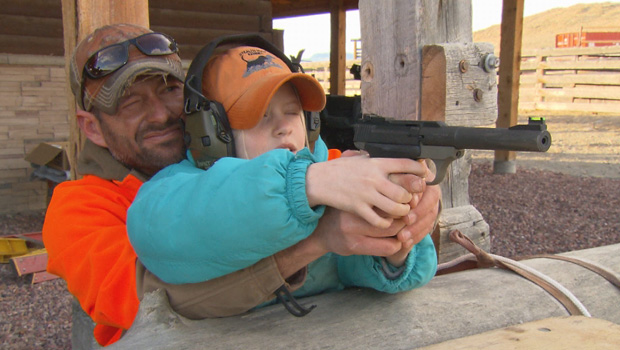 To some city-dwellers, guns are a potential threat to life. But those who live in our wide-open spaces tend to see guns as a way of life. For that story, we turn to the newest member of our "Sunday Morning" family -- Senior Contributor Ted Koppel:

If you've ever wondered where the deer and the antelope actually roam, it's here -- alongside moose and elk, bears and bobcats, coyotes and wolves -- at Mooncrest Ranch, a few miles outside Cody, Wyoming.

"It's still the Storybook West to so many people," said the ranch's owner, Bob Model, who looks like he's been riding all his life, and bears a striking resemblance to Teddy Roosevelt.

When Model's ranch hands head up into the mountains, they'll be carrying rifles, for protection against wolves and coyotes, or to put down a cow that's eaten a noxious weed or a horse that's broken a leg. Even down here, a couple of the men carry handguns. "Well, you never know when you might need it," one ranchhand said.

It's an enormous piece of land. Model owns 5,000 acres, and then there's another 195,000 acres of public land surrounding his ranch.

"And I appreciate that," Model laughed. "But I would say to you, I'm a good steward. I use it for grazing my livestock. And I am also a licensed big game outfitter. And you're lucky to have me, you know, watching out for your land."

"When people who don't hunt look around a place like this and you see all the heads up on the wall, they say, 'What the hell is that guy talking about? Conservation? They're killing them,'" said Koppel.

"The hunters have played an important role in conserving not only wildlife, but our resources upon which the wildlife live."

There's no getting around it: Guns are big in Wyoming, with more guns per capita than any state in the country. As for the residents of Park County (where Cody is located), Sheriff Scott Steward says people who aren't gun owners are very much in the minority.

Still, when it comes to the rate of gun-related murders, Wyoming is below the national average. Sheriff Steward will tell you he's all right with all those guns out there; he has only a handful of deputies.

"We might have three on duty in the county to cover 6,000 square miles," he said. "Sometimes you can have a deputy on one side of the county and get a call 40 miles away; chances are he's not gonna get there to intervene in any kind of conflict that may be going on."

"So what you're telling me is, people need to be able to take care of themselves?" asked Koppel.

Guns are woven into the tapestry of all the old Wyoming families -- that of retired Senator Alan Simpson, for example. His great-grandfather, John Porter Simpson, came to Jackson in 1884. "My grandmother lived to be a hundred," Simpson said. "She was born in Salt Lake in 1874, two years before the Custer battle. She always carried a derringer in her purse."

"I assume that back then folks needed their guns?" Koppel asked.

"Without guns, there'd be no West."

There is, Simpson concedes, a strain of violence in his family: "My grandfather murdered a guy in the main street of Cody in August of 1923," he said. "My grandfather was a lawyer, so he'd represented this guy. The guy didn't like the result, came up behind my grandfather, hit him in the back of the head."

Simpson's grandfather got a gun and shot his client -- killed him. A local jury voted for acquittal.

And then there is the retired U.S. Senator's own boyhood: "I was an assassin; we were bad," he said. "We stole shells, .22 shorts, and we'd go out into the hills and see how close we could come to each other in the rocks."

Simpson, you will not be surprised to learn, is no fan of gun control legislation: "Gun control in Wyoming is how steady you hold your rifle," he quipped.

Koppel visited with the senator's son, Colin, out shooting with his son, Mac (they call him "Big Mac").

"Does this sort of match what your dad did with you?" he asked Colin.

"Absolutely, Ted. What I'm doing here with the boys is exactly what we did."

There's a real effort to instill gun safety. "People in other places don't understand how careful we are, how much we understand and how we learn from a young age," said Mac.

At age 13, Dillon Romero is already a crack shot. It's an expensive sport, though, and his father had him draft a contract outlining what he's prepared to do in order to keep shooting.

"I have to keep a GPA above 3.95," Romero said, "not do any drugs or alcohol, ever, pretty much, and just stay out of trouble with the law and my teachers, respect him and my mom."

Dillon started shooting when he was about seven. That's how old Ella is now, but she and her dad, Bo Allen, have already been at this for a while.

Ella says she was about five when she first shot a gun. "So you're an old hand at this?" said Koppel. "You like coming out here and shooting with your daddy?"

Haley O'Neil's daddy, Justin, shows her how to cock back the hammer on her pistol.

"She is as sweet as can be, and she's clearly having a good time," said Koppel. "But there's some people might watch this and say, 'Boy, five is awful young, awful young.'"

"Not at all, actually," said Justin.

At this point, some gun control advocates in our major cities may be shaking their heads in disbelief. Folks out here, though, couldn't care less.

"And they don't give a **** what people think about them back there while they're killing each other every day -- more than they are out here," said Alan Simpson. "Why do we have to listen to that?"

Out on a pheasant shoot, says Colin Simpson, people and their guns get along just fine.

"It's a community event," he said. "It's a family event. The memories I have, with my father and my brother and my two boys and my wife -- I mean, you name it. Those are wonderful memories."

To a great extent our perspective of guns is shaped by where we live. This is the view from Cody, Wyoming.

When TV was black-and-white and attitudes toward sex were, too, Masters and Johnson's book, "Human Sexual Response," helped fuel the sexual revolution