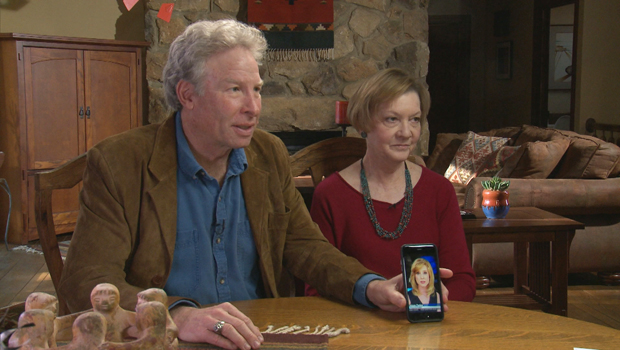 Some opponents of gun control argue the focus shouldn't be on guns but on keeping guns away from the mentally disturbed. Which brings us to this report from Erin Moriarty of "48 Hours":

Alison Parker loved telling everyone who tuned into her morning news show what was happening in Roanoke, Virginia. Everyone, that is, except her boyfriend Chris Hurst.

"She had this thing about not wanting me to watch her, 'cause she thought that she'd mess up," he said.

So neither Hurst, nor Alison's parents, Andy and Barbara Parker, were watching last August 26, when her live interview with a local Chamber of Commerce executive was suddenly interrupted by gunfire.

"Fifty-thousand people watched it happen," said Barbara. "We did not see it. And we never will. Never."

Alison and Chris had met and fallen in love at the station where he works nights as an anchor. He was asleep at home when -- a few minutes after the shooting -- a WDBJ staff member phoned Chris and told him he needed to come in.

"I believed in my heart that she was dead within minutes of waking up that morning," Hurst said. "It was all taken from me. It's way too soon."

"She was beautiful," said her mother. "She had an amazing sense of humor." As an example, her phone's screensaver is a photo of Alison giving a pig a kiss.

The gunman turned out to be someone the victims knew: a troubled former station employee, Vester Flanagan, who had been fired in 2013.

Before taking his own life later that day, he released a 23-page letter claiming that he had been motivated by other mass shootings.

Like parents of other shooting victims, the Parkers immediately changed the course of their lives. In a speech, Andy Parker said, "When my daughter, Alison, was murdered on live television, I pledged that I was going to do whatever it takes to reduce gun violence in this country."

"First, you're numb," said Andy. "You're completely in shock. And then you grieve uncontrollably, and obviously I still do. But then it turned to anger."

"What changes do you want to see?" Moriarty asked.

"The simple thing is just universal background checks," he said. "And closing the loopholes in these gun shows. That's the simple stuff."

But the sad fact is that Vester Flanagan did pass a background check, and bought his weapon legally.

"There are people that say, 'Well, nothing would've prevented her death,'" said Andy. "Okay. Maybe so. But is that a reason to not try and save the next life? Even if it's one life?"

The Parkers insist they are not taking aim at gun ownership, but at the NRA, which they say has stifled any discussion about regulations.

Moriarty said, "I think there are a lot of people who think you both are on this quixotic mission -- well-intentioned, but doomed to fail."

"We've seen this become a national conversation," said Barbara. "Whereas even a couple of years ago, no one would talk about it. But now people are all discussing it and telling us, 'What you're doing is important.'"

Chris Hurst says that what happens to people like Andy and Barbara Parker when they try to become activists is "They become targets. But we don't have any fear. We really feel like she's guiding us. And we're just following her lead."


At the Parkers' home, there are reminders everywhere in Allison's old bedroom of what could have been.

One sign reads, "I am fairly certain that given a cape and a nice tiara, I could save the world."

"That was your daughter," said Moriarty.

"That's what you would hope for all of our daughters," said Barbara.