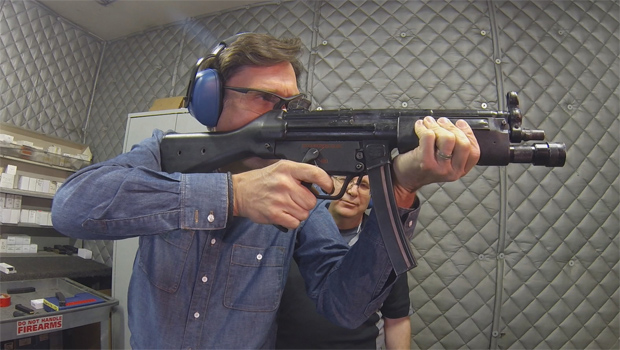 No other developed country embraces firearms the way ours does. The more we argue about them, the more it seems their mystique grows. But just how guns became part of our cultural DNA has been a long journey. And that is where Lee Cowan begins:

Of all the artifacts that were aboard the good ship Mayflower, not a single gun is known to have survived. But historians believe they were probably there, accompanying the pilgrims to Plymouth Rock.

Guns are so woven into the fabric of our founding that on the fourth floor of the Smithsonian's National Museum of American History, they have their very own vault.

"I'm sure there are people who'd give anything to come in here and see these things, right?" Cowan asked.

"Yeah, I get lots of visitors who are just astounded and don't want to leave," curator David Miller replied.

He's got guns of all shapes, sizes and calibers, and every one has a historic reason for being here. Some we barely recognize (such as the "hand cannon," probably made in Germany in the 1390s, and the oldest gun the museum's collection), and some we all know, such as a musket. It's not THE gun that kicked off the Revolution with that "shot heard 'round the world," but it's similar.

The musket is now in every history book. It's come to symbolize freedom and independence -- even celebrated recently on Broadway, in the smash hit, "Hamilton."

Guns are part of our everyday language "Going off half-cocked" -- "flash in the pan" -- "bite the bullet"... they're all rooted in firearms lore.

But were we really BORN a gun culture? Historian Pamela Haag says, not necessarily.

"Listen to how many sentences begin with something like 'Americans have always.' 'They have always loved guns. They have always had guns.' These things are much more complicated than that. The meanings of guns have changed."

In her soon-to-be-released book, "The Gunning of America," Haag says most settlers viewed the gun as a tool -- as necessary, and yet as ordinary, as a plow or an ax.

"We think we have a gun culture because of this special exceptional status with guns, but really, commercially, the gun was extremely unexceptional," she said. "It was very much treated like any other commodity."

At the start of the Revolutionary War, we didn't even have enough arms to outfit the Continental Army. Today, however, it's estimated we have more guns than people.

So how did we get from there to here?

"The gun industry is not the only reason we got here," Haag said. "However, it is the reason that never gets talked about."

It's not just a matter of salesmanship, but gun industrialists like Oliver Winchester and Samuel Colt did their level best to create a market for their wares. Out of their factories in Connecticut -- what came to known as "Gun Valley" -- they would soon produce firearms with the same speed and efficiency as Henry Ford would later do with the automobile.

Best known: the Winchester '73 and the Colt Single Action Army revolver -- two of the guns that won the West.

But as the frontier disappeared, so did the desire of many Americans to own a gun. They were not, Haag said, "flying off the shelf."

So by the 20th century gunmakers started to market their guns not just as a tool, but a feeling. "What was once needed, now had to be loved," said Haag.

There was a strong appeal to the young, too, and the notion of the gun as a rite of passage.

One of the more interesting ads, Haag noted, from 1921, read: "You know your boy wants a gun, you just don't know how much he wants it. He can't tell you. It's beyond words!"

For parents worried about real guns, there were catalogs full of toy ones -- a "must-have" immortalized in what is now a Christmas classic ("The holy grail of Christmas gifts! The Red Ryder 200 shot range model air rifle!").

It resembled the iconic rifles of the Wild West, and nothing romanticized the gun better than the cowboy.

From real-life legends like Wild Bill Hickok, Wyatt Earp and Annie Oakley, to Hollywood immortals like John Wayne and Jimmy Stewart, the gun came to represent the rugged individualism of the untamed West.

As the good guys and bad guys changed, so did the guns. And some became as famous as the stars who fired them.

"Being that this is a .44 magnum, the most powerful handgun in the world, and would blow your head clean off, you've got to ask yourself one question: 'Do I feel lucky?' Well, do ya, punk?"

If the guns in movies look especially authentic, that's because they are. Hollywood gunsmiths take real working firearms and modify them to shoot blanks.

Pretty convincing, right? They have to be, says Larry Zanoff, an armorer at Independent Studio Services, one of the largest prop houses in Hollywood.

"We like to say that, if we do our job correctly, you never really notice the props," said Zanoff. "But if we do it incorrectly, somebody's going to call you on it. The education level of the public is much greater than it was. So yeah, we have to be that accurate down to the nth degree."

We do take our guns seriously; owning them is a Constitutional right, but we've also tried to legislate how to control them. "Americans have always had mixed feelings about guns," said Haag. "So for as much as the gunslingers are part of our heritage, so, too, is disquiet and discomfort with guns."

Even in the supposed Wild West, towns like Tombstone and Dodge City prohibited people from carrying guns in public.

FDR signed the first federal gun control legislation in 1934, hoping to reduce the number of bootlegging gangsters armed with Tommy Guns and the like.

Then fast-forward three decades: The assassinations of John F. Kennedy, Robert Kennedy and the Rev. Martin Luther King lead President Lyndon Johnson to push through the Gun Control Act of 1968.

Too much anguish back then -- but what about now? Today there seems to be an alarming sameness to our gun violence -- from Columbine High School, to a Tucson parking lot, to a movie theater in Aurora, and to a grade school in Newtown, Conn.

These incidents don't decrease gun sales; instead, gun sales tend to go up. In fact, U.S. gun-makers produced nearly 11 million firearms in the year after the Sandy Hook shooting.

Not far from there, in Hartford, Connecticut, sits a church built by Samuel Colt's widow. It stands as a unique symbol of where guns sit in our culture today. Because mixed in with the cherubs and the saints, you'll find her husband's firearms as art on the walls, mingling with the ivy, hidden at the top of the church's columns.

And maybe that's the place guns will always occupy -- worshipped by many, their presence carved in stone.

​Shaker furniture: Simplicity is all

This week on "Sunday Morning" (November 14)