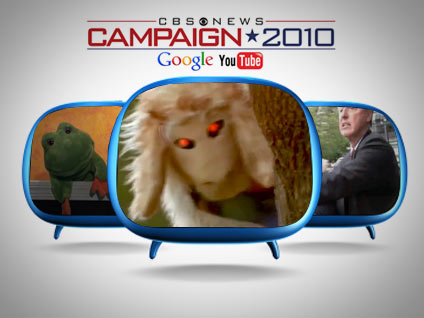 The 2010 election has left us with some very memorable political moments, many of them on camera. Now, for the first time, CBS News has joined with Google to showcase data from YouTube that provides insight into which political videos most struck a chord with Americans.

Here are the most-viewed YouTube videos related to the 2010 election from this year. You'll notice that every video comes from the right side of the aisle:

In June of this year, Democratic Rep. Bob Etheridge of North Carolina lost his cool on camera, resulting in a video that went viral on conservative blogs. The video showed Etheridge responding in a physically hostile manner after a self-identified student approached him and began questioning him. The congressman quickly apologized for what he called his "poor response."

Etheridge is a longtime incumbent who's been re-elected fairly comfortably in the past, but the video - along with the anti-incumbent mood across the country -- may be hurting him. A recent SurveyUSA poll puts his challenger Renee Ellmers up by five points, 46 percent to 41 percent.

In May, Dale Peterson, a candidate in the Republican primary for Alabama Agriculture Commission, brought the world a must-watch ad that quickly went viral. In the spot, Peterson, speaking in the staccato style of an angry drill instructor, expresses outrage over the "thugs and criminals" who are trying to "keep you in the dark" in order to "do whatever they want" with the commission's billions of dollars.

In January of this year, YouTube user "gizgreen" posted a political video that employs the dramatic music and quick cuts one might see in a movie trailer. The film we're being shown, announced on the screen at the end of the video, is "November 2, 2010."

"We gave you power. In the House. In the Senate. And in the Oval. We voted for hope...We regret it," according to words that appear on the screen, which are followed by images of Democratic leaders. After making reference to policies unpopular with conservatives, such as health care reform and the stimulus bill, the video shows the message, "We've had enough. We're taking our country back."

Republican Arizona Gov. Jan Brewer was catapulted into the national spotlight this year when she signed into law Arizona's controversial immigration law, which makes it a state crime to be an undocumented immigrant in Arizona. Her support for the measure put her in direct conflict with President Obama, whose administration chose to challenge the law in court.

Brewer's support for the measure boosted her conservative credentials in the midst of her re-election bid, and her campaign took advantage of the situation by posting videos such as this one. It contrasts violence the governor attributes to the Arizona's illegal immigrants with footage of Mr. Obama joking about Arizona's law at the White House Correspondents Association dinner.

Tim James, a Republican candidate for governor in Alabama who lost his primary, released an ad in April that went viral and caused some controversy. The ad, which has been taken down from YouTube, questioned Alabama's practice of printing driver's license exams in 12 different languages.

"This is Alabama," James says in the ad, looking straight into the camera. "We speak English. If you want to live here, learn it. We're only giving that test in English if I'm governor. Maybe it's the business man in me, but we'll save money. And it make sense."

The issue of printing driver's licenses in different languages could be a legitimate issue, CBS News Chief Political Correspondent, the Atlantic's Marc Ambinder wrote at the time, "but the ethnic coding in the ad is unmistakable, especially because it's not the type of thing that voters in Alabama would care about unless someone deigned to bring it to their attention."

In another example of Jan Brewer's attempts to capitalize from her showdown with Mr. Obama over immigration policies, the Arizona governor released this minute-long web ad in June blasting the president for new federal signs in the Arizona desert warning visitors about illegal activity.

"This is an outrage," Brewer says in the ad. "Washington says our border is as safe as it has ever been. Does this look safe to you?"

Released by the Republican Study Committee in August, this video splices a speech from President Ronald Reagan with contrasting remarks from Democratic leaders.

California's Republican Senate candidate Carly Fiorina had political pundits scratching their heads and the rest of us laughing with this ad against her primary opponent Tom Campbell, released in February. The official ad, released by a political action committee, is no longer online, but others have re-posted the video on YouTube.

This video of then-Republican gubernatorial candidate Chris Christie shows (as the title suggests) the New Jersey politician responding to an angry teacher at a town hall meeting. It went viral in September, and Christie went on to win the election in the blue state two months later.

The last video is the third on the list from Arizona Gov. Jan Brewer on the topic of immigration. The video pokes fun at politicians who criticized the Arizona immigration law without reading the legislation.

The following videos were the top 10 to come directly from politicians' official YouTube pages within the last year:

5. "Nancy Pelosi, Wicked Witch," John Dennis, California (removed from YouTube, but featured in the Hotsheet's Hot Ads of the Week)

(Note: Parodies of "I'm You" (such as "Songify This") received millions more views than O'Donnell's original ad. But while they were popular on the national level, Google data shows that O'Donnell's own ad has received more views in Delaware than any of the parodies.)

Below are the politicians whose official YouTube pages have received the most views, as of November 1, 2 p.m. ET: